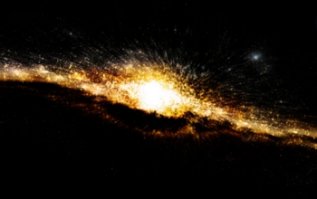 It is now assumed that the universe itself burst into existence some 15 billion years ago. For the first few hundred thousand years matter and radiation intermingled to form a thick fog. Then, around 300,000 years after the 'Big Bang' temperatures fell and electrons began to bind into hydrogen and helium nuclei to form the first stable atoms. Soon the universe began to fill with gas clouds and these eventually formed galaxies. Four billion years after the Big Bang, these galaxies spawned the first stars and as these stars aged and collapsed, new generations of stars were born from newly created elements.

After a further 10 billion years, a small star ignited on the third spiral arm of our unremarkable galaxy. This star gave light and heat to dust and rubble caught in its gravitational pull, and from this debris four rocks formed in gravitational eddies, each attracting other space 'leftovers' as their own gravitational pull developed. The star also led to the formation of larger 'gas' planets further out in its 'solar' system. The first of these rocks, Mercury, became a barren planet, similar to the size of the Earth's Moon. It was first photographed in detail in March 1974 by the Mariner 10 spacecraft and, although having craters mountains and ridges, its massive temperature fluctuations, (which can be as high as 425 degrees celcius on the equator at noon, and plummeting to -180 degrees just before sunrise) make for the existence of life there 'as we know it' being more than improbable. 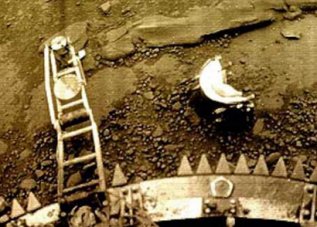 The second rock from the Sun is Venus. This planet is the closest to Earth and the brightest object in the sky, apart from the Sun and Moon. This light is due to its covering of dense clouds that reflect over three-quarters of the sunlight received by the planet. These clouds actually conceal a deadly atmosphere, for although the main atmospheric gas is carbon dioxide, traces of other substances have been detected, including hydrogen sulphide, carbon monoxide, sulphur dioxide and hydrochloric acid. The surface (above) was photographed for the first time in October 1975 by the then Soviet Spacecraft Venera 9. This showed the planet's surface to be rocky with stones scattered across it with what appears to be soil in between. Conditions on Venus also suggest that it could not support life as we know it.Then there is the third rock from the Sun. A planet different from all others in the Solar System; for it is teeming with life, vegetation, water, and incredible scenery (at least to human eyes.) The blue planet is almost 8000 miles in diameter, and moves around the sun in harness with its Moon at a distance of approximately 93 million miles. 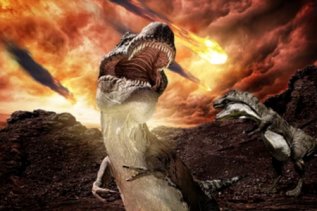 Images from space show the familiar face of the planet, however the continents have not always occupied their current positions. Up to 225 million years ago, most of the land on the planet was combined into one 'super-continent' named 'Pangaea' by geologists. This composite land-mass made for the easy and rapid spreading of life forms and vegetation. See video below for how Pangaea broke up into our current continental structure. The planet's historical periods have been broken down by geologists into the pre-Cambrian period (4600-590 millions of years ago) when there were few fossils. The Paleozoic (590-225 millions), by the end of which reptiles were dominant. This period also saw a major extinction when many species of plants and animals died out.

The Mesozoic period (225-65 millions) ended with the Earth probably being struck by a huge asteroid that wiped out the dinosaurs and allowed mammals to dominate through the subsequent Cenozoic period which ended two million years ago with modern type animals scattered across the planet surface. 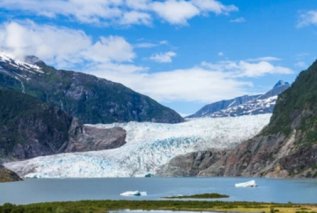 Throughout its history, the planet has also seen many ice-ages, with the Mendenhall Glacier in Alaska (right) formerly reaching well into the United States and as far south as present day London, England during the last of these periods. Until the 18th Century however, few were curious about the planet's history, nor did many question the tradition that all life on it had been created in 4004 BCE; a date calculated by Archbishop Ussher, who merely added up the ages of figures in the Christian Bible back to Adam and Eve. This orthodox Christian view demanded literal acceptance of the origin of all things as described in the book of Genesis in the Bible. Each and every thing on the planet - and only on this planet - was especially created by God, and humankind was the crowning achievement of this rather hectic six days.

Any suggestion that living things could change through time inherently suggested that they were imperfect, and God would not have created something imperfect unless s/he was imperfect as well.