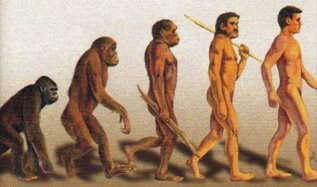 Creationists also argued that God would not create an animal or plant only to let it become extinct later. Yet the fossil record throughout the world could not be ignored. Shells, teeth, coiled ammonites, and bones, all made out of rock, were constantly being unearthed to provide a challenge to the creationist theory. Early ideas on their origin were vague and diverse. Some believed that the fossils were the workings of a life force in the Earth, straining to make images of the creatures of God's creation. Others suggested that the eggs of real animals had lodged in the rocks and developed as rocky tumours (1). In order to explain these findings in religious terms, the fossils were said to be the remains of creatures drowned in the flood, a theory which also explained how the fossils of sea creatures were found on the top of mountains. (2)

Whilst this remains the position of many Christians throughout the world, others recognised that living things do change, and the concept of 'evolution' was born. This theory has generally been credited to Charles Darwin, although, in fairness, others made significant contributions to the idea: They just didn't happen to be English so were, in the main, forgotten about. Eight years after publication of Darwin's book, naturalist Ernst Haeckel made one of the first attempts to deal with the specifics of evolution. Although his genealogical chart, starting with a blob of protoplasm and continuing to a 'modern' Papuan is filled with misconceptions and fictitious characters, the concepts were broadly accurate considering the paucity of knowledge in his day.

The general concept of Darwin's evolution is that there is a continuous struggle for existence and those species which adapt (evolve) are the most likely to survive. This is no longer an accepted view of the theory. Many now agree that some changes are merely random mutations, which happened to suit the environment and survived. However such mutations would only have taken hold if they occurred in small, isolated populations. (3) Whatever its process, evolution has led to the development of approximately 30 million separate species on Earth at the present time and it is estimated that a further 3 billion species may have previously existed but become extinct (4). Evolutionists contend that small living organisms first appeared on Earth 630 million years ago and some 500 million years later a tiny shrew-like creature appeared on the planet's surface. About 60 million years ago, after the dinosaurs' extinction, the early primates on the planet diversified rapidly and by 50 million years ago monkeys and apes had evolved.

The ape-human divergence happened relatively recently, between five and eight million years ago (5) and the first members of our genus, Homo, evolved from the African australopithecines approximately 2 to 1.5 million years ago. The number of skulls and skeletons that have been found indicate that most Australopithecus died before they reached the age of 20 suggesting a large number of orphaned children who would have been raised by surviving 'elders'. (6) It is generally recognised that "two million years ago, this first certain ancestor of man walked with a foot which is almost indistinguishable from the foot of modern man. The fact is that when he put his foot on the ground and walked upright, man made a commitment to a new integration of life." (7)

This first real man is known as a maker of simple stone tools and the upper cavity of his skull suggests a brain volume of only half that of a modern human, but with a zone of the cerebral cortex known to be responsible for speech production (8). This man could walk upright and talk. Then one million years ago, Homo erectus appeared and spread far beyond Africa. One find of this kind was made in China and called Peking Man; a 400,000-year-old creature that was the first to use fire. 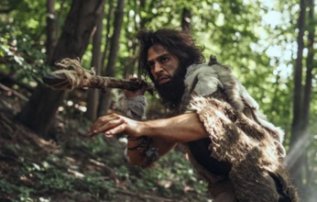 By this time a 'brain explosion' had occurred with the human brain inexplicably expanding by another third, with most of that growth occurring in the cerebrum, the area of the brain used for thinking. Neanderthal man (above) then appeared some 150,000 years ago, however this line of man died out to be replaced (or displaced) as Cro-Magnon man established himself as the enduring human life form on the planet some 100-90,000 years ago. (Some have speculated that Cro-Magnon man, Homo sapiens, actually destroyed Neanderthal man.) It is an unattractive thought that our race may have survived because we were prepared to kill our fellow man.