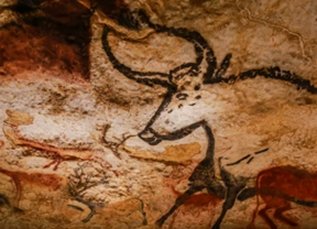 We popularly imagine our ancient ancestors as primitives, scratching out a living from cold barren caves, preying on unsuspecting animals for food that is then roasted over man's greatest discovery, fire. The more mentally agile, may even throw in a scantily dressed Racquel Welsh look-a-like poised up a tree as a Tyrannosaurus Rex thunders by. (Political and historical correctness, of course, did not exist then.) Yet 'ice-age' man was far from the primitive we popularly conceptualize. We know this from paintings he has left behind in caves such as these at Lascaux in France, (above), and from other evidence. One such piece of evidence had lain forgotten in a dim corner of a French museum. Then in 1965 a researcher examined this fragment of a carved reindeer bone. Under a microscope a pattern could be discerned, a pattern which appeared to represent the phases of the moon over a period of two months (below). Shack, the person who made the discovery, recalls the find. 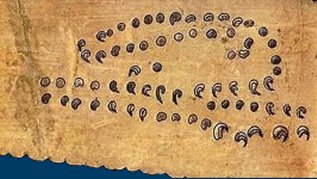 "Whether or not the image is accepted as lunar, as it seems to be, I had discovered the earliest known human notation, made more than twenty thousand years before the development of writing, arithmetic, or the calendars of later cultures we regard as civilized. Gradually the bone told me a great deal about the skills of its owner, and how he may have thought. Patterns of wear identify it as a pressure flaker, a kind of prehistoric machine tool, used to shape stone instruments. The man who made and carried it over a considerable period, also used it as a notebook, apparently to record an important sequence in his everyday life, the changing moon that marked the passing seasons." (9)

This find was remarkable for it suggested that Cro-Magnon man thought in a far more sophisticated way than was believed possible. Up to the discovery of the reindeer bone, all that was known about Cro-Magnon man was pieced together from archaeological remains. These were first discovered in France in 1868. Hundreds of thousands of his stone tools have subsequently been found as have painted images in caves in south-western France and northern Spain.

The reindeer bone was found in 1911 by a French archaeologist Louis Didon in the Blanchard rock shelter near the French village of Les Eyzies. Shack decided to investigate Cro-Magnon man further with a view to shedding further light on his culture. From a base in Les Eyzies, he journeyed across Europe examining thousands of Ice Age artifacts and engravings. Shack wasn't particularly interested in the physical aspects of Cro-Magnon man, but rather "those fragile and subtle clues as to how he thought." (10)

Shack concluded that Cro-Magnon man was remarkably sophisticated. No, he did not have electric kettles, mobile phones (or nuclear waste), but he had a skeleton and brain like modern man's and was capable of imagery and abstract thought. Seventeen thousand years after Cro-Magnon man populated Europe, his world began to melt around him signalling the ending of the last ice-age. 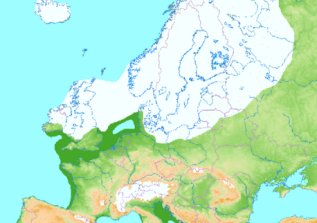 Great glaciers retreated towards the poles and this process lasted until around 7500 BCE, destroying many land bridges in its wake and finally separating the British Isles from mainland Europe, leaving many forests across the globe submerged. (Above image of Europe at the time of the last ice-age.)

Then during this period, 12,000 years ago, there began the Mesolithic or Middle Stone Age in northern Europe; a food-gathering way of life with fishing and fowling rather than wide-range hunting. The age produced some important inventions such as the barbed fishhook, the bow and arrow, the cooking pot of baked clay, and perhaps most importantly, the comb! Within 4000 years the Neolithic age arrived, representing a change from living on nature to co-operating with nature. It depended on two fundamental inventions; the domestication of animals and the cultivation of crops. This way of life produced new flint tools; the sickle, the hoe and a better made axe. 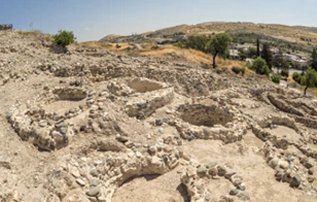 There is also evidence that mankind was beginning to navigate on the open sea as this Neolithic settlement (above) is to be found at Khirokitia on the island of Cyprus. And then in 6800 BCE there is evidence of Neolithic people settling at the site of Jericho, with houses and a protective wall, suggestive of organised raiding and warfare. At about the same time, a village appears on a tributary of the Upper Tigris at Jarmo where there are also houses made from pressed earth with reed floors. The area between the river Tigris and the Euphrates was extremely fertile and attracted the people we call Sumerians to settle there.

Then by 3000 years ago cities had grown around the rivers Tigris and Euphrates. Some of these, such as Ur, Nippur and Eridu had thousands of inhabitants. Groups of hunters had, by this time, moved into the Nile valley where they found an abundance of animals, birds and fish, but more importantly, a reliable and plentiful source of clean water in the River Nile. The farmers eventually joined together to form two kingdoms, Upper (southern) Egypt and Lower (northern) Egypt. In 3100BCE a king, seemingly named Namer by hieroglyphics but traditionally known as Menes, advanced from his southern capital of Abydos and conquered the Lord of the Delta Land and created the First Dynasty of the combined Old and New Kingdoms of Egypt (11). Once the two kingdoms were joined, Egyptian culture flourished until they came up against the seemingly invincible Roman Empire. In more remote areas of Europe megaliths had appeared apparently to indicate where on the horizon the Sun and Moon will rise and set at special times throughout the year. This monument (below) is part of the thirty-eight stones that form a circle at Castlerigg in England. Legend states that the stones are men petrified by the Gods and now serve as astronomical markers. 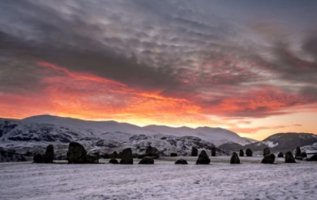 These cultures seemed far removed from the high technologies and mathematical excellence used in the construction of the pyramids, the Sphinx and the city of Tiahuanaco apparently thousands of years before man built his mud-huts in Jericho and positioned these ancient megaliths. Indeed this accepted view of world history simply cannot account for the planet's real history. It therefore appears that our view of world history is in need of some revision and the possible extent of how much revision was revealed in the early years of the Twentieth Century when a violent flood tore through the Paluxy River Valley in Glen, Close, Texas. What it revealed was startling.