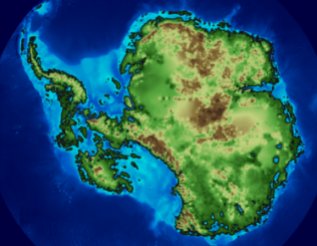 If Antarctica had originally been located thousands of miles further north, or at least not covered in ice - it would reveal itself in its true form; split into East and West Antarctica, with a sea in-between its constituent parts (above). For Antarctica is only one huge continent when covered in ice and it has not been that free of ice for at least four million years. It is inconceivable that the continent could have been situated away from the pole, but still under solid ice at its centre as the Oronteus Fineaus map inevitably suggests. The only other way Antarctica could have been the home for a civilisation is if it has been ice free in recent times - at least within the last twenty thousand years. Yet, the available evidence confirms that this is not the case.

Drilling was undertaken in 1967-8 at Byrd Station where a core drill went down 7,101 feet before it hit liquid water near the bedrock, then froze fast (24). In 1970 Soviet scientists began drilling at Vostock Station, high in the inland ice cap in east Antarctica. In 1981-2 French scientists reached more than 900m beneath a point called Dome C, near the centre of the huge ice cap. And since 1980 the Vostock ice drillers have bored through more than 2080m of the 3700m (12,140ft) of the ice under the station (25). "The Vostock core is the first to cover, completely and unambiguously, the entire last 150,000 years of the earth's ice-age cycle." French Glaciologist, Claude Lorius, reported in 1985 after working with Soviet scientists on the ice-core (26). "It clearly goes back through earth's previous interglacial warm period, called the Eem or Sangamon, and well into the ice-age before that." Lorius continues, "That previous interglacial was similar but markedly warmer than our present warm spell, the Holocene. The beginning of the previous warming was as sharp and extensive as was the opening of the Holocene, between about 10,000 and 8000 years ago." (27)

A discovery made in 1996 also confirms that a least part of Antarctica has been under ice for millions of years. Space and ground based instruments identified a huge lake more than two miles below the continent, insulated by millions of years of ice that may still be a home to creatures that inhabited the planet more than 30 million years ago. Researchers know that there should be life in this underworld lake for Russian and American microbiologists have already examined microbes in samples of ice laid down a mere 400,000 years ago. "We've found some really bizarre things - things that we have never seen before," noted Richard Hoover of NASA.

He and his Russian colleague have given the microscopic creatures temporary nicknames such as Klingon, Mickey Mouse, Porpoise and Sphere (28). The discovery at such depths raises the hope that other stranger life forms will be found in the lake, particularly as volcanic heat deep in the rock may provide energy to sustain such forms of life. Antarctica is 58 times as big as Britain and there could be hundreds of lakes below the ice-sheet. "Every single one of them could be potentially of significance," said Dr Ellis-Evans of the British Antarctic Survey. "This is a whole new world opening up for us." (29) 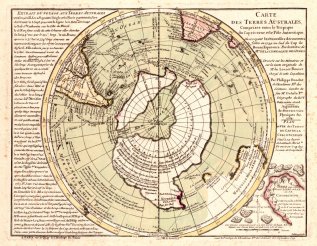 It would appear that the maps are neither going to confirm Antarctica as the home of the missing civilisation, nor as evidence of such a civilisation. Indeed a closer scrutiny of the Oronteus Fineaus map in particular, reveals that it may be little more than a romantic pictorial of a southern continent. This map certainly does not resemble the subglacial bedrock topography of Antarctica, for example, Wilkes Land, which the Oronteus Fineaus map shows as solid land is occupied almost entirely by two large subsea basins and an archipelago of bedrock islands. (30) In a partially glaciated Antarctica this solid land shown on the map would also be under water.

The map also fails to show the Amery basin, which in either a partially or completely deglaciated Antarctica would be occupied by a 430 to 500 mile long bay lying perpendicular to the coast of Antarctica between Princess Elizabeth land and Mac Robertson land. (31) The map has other faults. Because the bedrock surface underlying West Antarctica lies hundreds of meters below sea level, except for some bedrock islands, the coastline shown on the Oronteus Fineaus map, would have had to have been to the edge of an ice sheet. Yet as noted above, Hapgood, claims the map shows rivers mouths, fjords and other non-glaciated features on this glacial coastline. In essence, the map does not show an Antarctica free of ice, nor does it depict an accurate ice-bound Antarctica. Despite this, the map does exist and sufficiently resembles the continent to confirm that its makers had some knowledge of, or belief in, a southern continent.

However irrefutable proof of such a southern continent being mapped in prehistory could only be confirmed if an ancient map could be produced that accurately showed Antarctica in its separate landforms. It has been claimed that such a map does exist. It is called the Bauche Map (above) and was drawn in 1737 by Phillipe Bauche, an eighteenth-century French geographer. It has also been suggested that Bauche's source maps were older than those of Piri Reis or Oronteus Fineaus given that he appears to show Antarctica as it would have looked millions of years ago, in a partially glaciated state. However, despite showing Antarctica as two landmasses, the map appears to have little else in common with the continent as we now know it to be. Critics argue that except for showing that there is a landmass there and a sea did flow through the middle, the map is of no academic value.