In the summer of 1909, a year after this flash flood, local teenager 'Bull' Adams, was wandering through the Wheeler Branch tributary of the river when he came across a series of large, three-toed footprints (1). Bull Adams wasn't to know this at the time, but he just as he was destined to disappear into relative historical obscurity, he was to bequeath to his little brother George a profitable sideline that would generate much controversy in the years to come. These three-toed footprints were first recognised as dinosaur prints by local schoolmaster, Mr. R. E. McDonald, and they have since been more specifically identified as tracks from a large theorpod dinosaur called Acrocanthosaurus (below) (2). 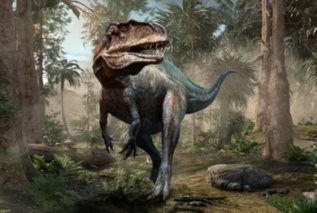 There is nothing unique in the discovery of dinosaur footprints in prehistoric former muddy waterbeds, for such footprints can be found in such locations throughout the world. However what was shattering was the discovery made two years later by two other local youths, Charlie and Grady Moss. The brothers were fishing in the Paluxy River itself when they came across a trail of these three-toed dinosaur tracks (above) on a limestone shelf alongside what appeared to be human footprints (3). (On the left is the dinosaure track and on the right a human footprint.)

These 'giant mantracks' as Charlie Moss described them, were readily accepted as genuine human footprints by the local townspeople, but only regarded as a minor curiosity. It appeared that no-one who knew about the tracks considered their full implications; for, as discussed in the previous chapter, our standard geologic timetable of accepted history informs us that there was a gap of over sixty million years between dinosaurs and mankind. (In fact these tracks were even more ancient than that, now being assigned by mainstream geologists to the lower Cretaceous period, some 113 million years ago. (4)) The find of human footprints together with those of these theorpods should therefore be impossible, yet the tracks were there and other supporting evidence of the co-existence of the two species in Paluxy was discovered close-by; namely a fossilised human tooth, a trilobite and a hammer.

This 'evidence' for a revision of history was music to the ears of the Creationist lobby - those who argue that the world is not millions of years old but merely thousands, as 'claimed' by the Bible. Creationists also believe that Earth was created 'old' - though quite why a God who is considered a leading authority on truth and honesty, should have set the ball rolling by starting with a misleading Creation remains unanswered. News of the mantracks slowly became wider knowledge and led to the publication of several articles and books. Amongst the first creationist advocates of the man track claims was Clifford Burdick, an American who had previously helped found the Deluge Society, one of the first Creationist groups. Burdick's early investigations in the 1940s put him in contact with local Paluxy character Al Berry. Berry was in possession of a number of individual slabs cut from the riverbed with the curious footprints on them.

He and local storekeeper, Jack Hill, signed an affidavit stating that they had gone to Glen Rose in the autumn of 1938 to retrieve some 'human' and 'cat' tracks that were in danger of being destroyed by the construction of a small dam on the Paluxy river. The slabs later came into Burdick's possession, with one of them subsequently being named after the new owner; the Burdick Print. Burdick then published an article about the prints in the Seventh Day Adventist magazine, Signs of the Times in which he stated that the Paluxy riverbed contained clear dinosaur and contemporary human footprints. Burdick's interest wasn't geological; as a creationist he considered the dinosaur and human footprints as irrefutable proof that evolution had not occurred, and that the fossil record was merely formed during Noah's flood. This article generated a new wave of interest (5). 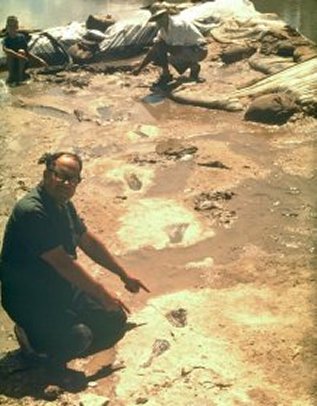 The years passed, and in the early 1960s the existence of the Paluxy mantracks became more widely known when photographs of the loose carvings previously owned by Al Berry and Jack Hill were published in the book The Genesis Flood by John Whitcomb and Henry Morris (6). A further creationist book, Man's Origin, Man's Destiny followed in 1975 (7) and shortly after its publication, the tracks came to the attention of Stanley Taylor, a Baptist minister who owned a film company, Films For Christ. Taylor made enquiries of the tracks, and his research led him to produce and narrate a 16mm film entitled Footprints In Stone in 1972.

In this film, Taylor (above) continued to promote the creationist theory by suggesting that several of the prints showed human toes formed alongside and at the same time as the dinosaur prints. Much of the film concentrated on an area now known as the Taylor Site which contains a deep dinosaur trail together with several human like trails, some of which were excavated by Taylor's team from under previously undisturbed rock strata. The film itself was shown in schools, churches and church groups across America for many years and helped to promote widespread acceptance and belief in the 'mantrack' - and thereby the Creationist - claims.

The 'Delk slab,' is a Paluxy river rock containing a fossil human footprint upon which a dinosaur allegedly stepped. CT scanners were used to analyse the rocks and these scans apparently authenticate both tracks, making this slab of rock purported evidence that dinosaurs and humans lived together.Others are less sure citing a number of issues that make the Delk mantrack slab even more suspicious than other claims. Indeed even the most ardent creationist groups have failed to support the find after its promoters have still have not published the rigorous scientific evidence needed to support its authenticity. Check out the video and see what you think.