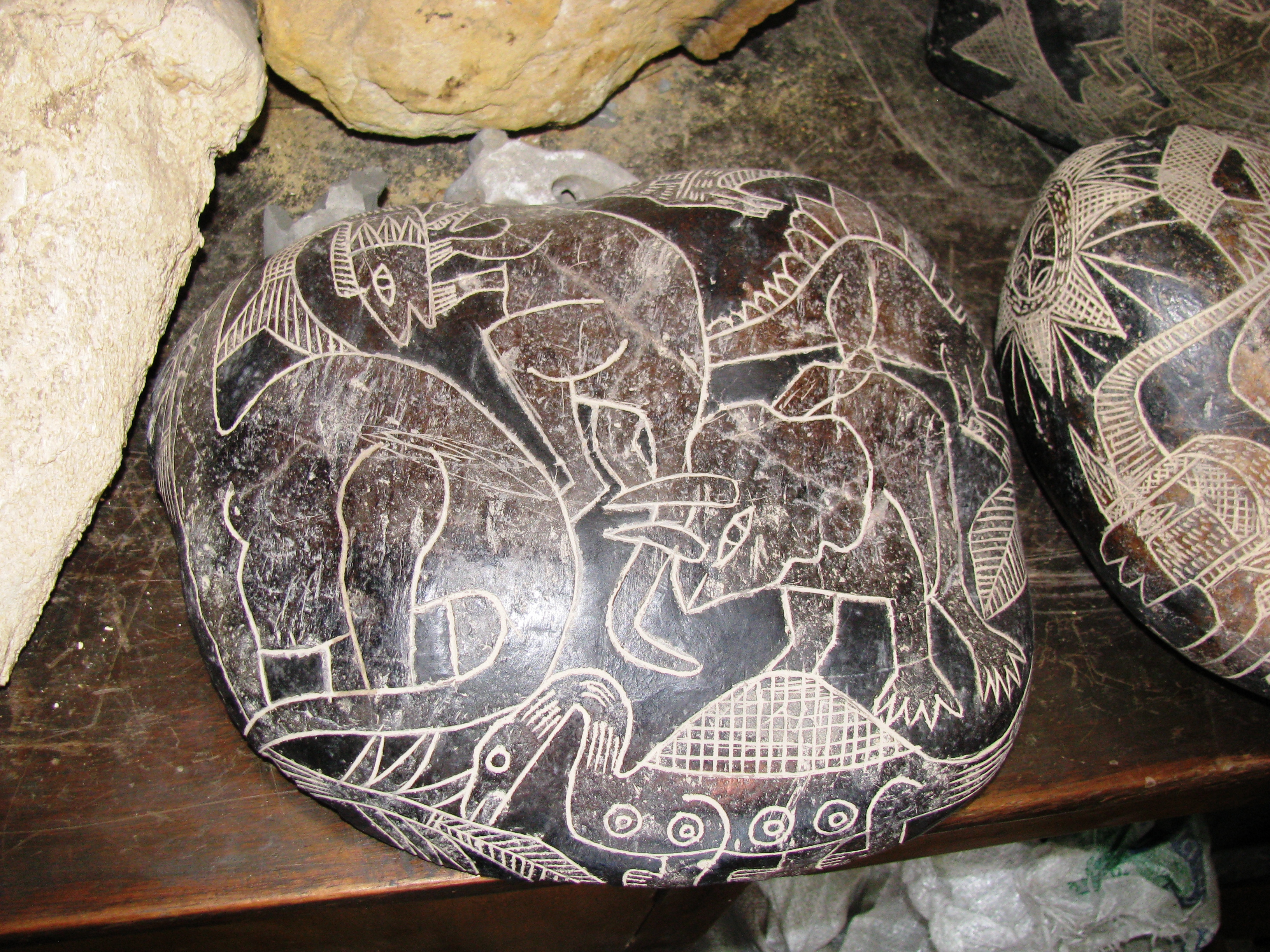 The concept of dinosaurs and man co-existing in the same time frame, whilst initially appearing untenable, is actually supported by other evidence. As noted in the first chapter, someone in our lost history carved a picture of a pre-historic toxodon in the Gateway to the Sun, high on the Peruvian-Bolivian border. Such a 'one off' find may, at some point in the future, be explained however there are other drawings and carvings that appear to defy explanation. For example, American writer and archaeologist A Hyatt Verrill has demonstrated that the Cocle Ceramics of Panama depict a flying lizard which resembles the pterodactyl (8). Similarly, in 1924 the Doheny Scientific Expedition discovered in the Hava Supai Canyon in Northern Arizona, a rock carving which looked amazingly like the extinct Tyrannosaurus Rex standing on its hind legs (9). In another rock image in Big Sandy River in Oregon, the prehistoric sculptor left a portrait of what clearly appears to be a stegosaurus; a creature that also lived before man (10). However the most dramatic evidence of apparent images of dinosaurs on pottery and stone came to light over thirty years ago in various gorges and caves at Ica, a small area some 300-km from Lima in Peru near the famous Nasca lines.

These stones have been termed the Ica Stones and the images on them include what appear to be realistic depictions of Stegosaurus, Tyrannosaurus Rex, Pterodactyls, ancient pilots over a herd of dinosaurs (manoeuvring some form of craft), advanced surgical procedures, views of Earth 13 million years ago and men attacking and subduing dinosaurs with hand axes. The villager from Ica who apparently discovered the stones produced a few bags of them at first, but later produced literally thousands; 15,000 to be exact, ranging in size from the size of a tomato to twice that of a football.

This villager made a modest income selling the stones to tourists and the curious and he became something of a local celebrity. However, as word of his transactions spread, experts descended on Ica, bringing his activity to the attention of the Peruvian Government who promptly arrested him, for they had no intention of becoming another Egypt; overrun with diggers and robbers. The farmer remained imprisoned for some time before being released and announcing to the world that the stones were a hoax as he had carved the strange pictures on them himself. However, by this time in 1966, a local physician and Professor of Biology, Dr. Javier Cabrera, had been given one of the stones for his birthday. His particular stone had been carved with the image of a fish; a fish that was known to Cabrera as a species that had been extinct for millions of years. 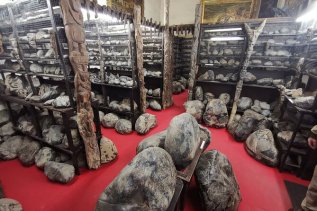 Cabrera set out to locate the farmer who had admitted to carving the stones, for the picture of the extinct fish had convinced him that the farmer's confession was the hoax rather than the stones themselves. Cabrera could not accept that an uneducated Peruvian village farmer could depict scenes such as medical procedures, dinosaurs, astronomy and flying reptiles. And, as Cabrera's enquiries continued, the full extent of the story became known. The farmer accused of forging the intricately carved stones farmer admitted to having sold thousands of them, and over a period of time Cabrera himself purchased over 15,000 of them himself (above left). However even this was not the full extent of the actual number available, for the farmer who claimed he had perpetrated the hoax showed Cabrera a further 100,000 that remained in tunnels near the coastal mountains. It quickly became apparent that the farmer could not possibly have carved the stones himself, casting absolute doubt on the validity of his confession.

As Cabrera continued to befriend the farmer, he learned that he had only been released from prison after signing the confession that the stones had come from the hills but that he had been carving them himself. (It was either that or remain in prison for the remainder of his life for selling 'government possessions.') Many of the stones now feature in Dr Cabrera's own museum where they are divided into topical sections: Medicine, astronomy, astronautics, dinosaurs, ancient continents, flora, fauna, planetary races of people and mechanical airships with men leaving Earth. Some claim, as does Cabrera himself, that the Ica Stones are an ancient library left by a forgotten culture, others continue to dismiss the entire collection of stones as an elaborate hoax. The hoax theory appears the most obvious solution, particularly as there is a signed confession to that effect, yet it is impossible to believe that one man could have hand engraved the hundreds of thousands of the stones known to exist.

That would mean the farmer had carved around seven stones a day for forty years without a break (and without any time left to sell them). It would also mean that this uneducated man had knowledge of all the areas of the carvings he had made and quite why he should have carved an extra 100,000 (many times more than he ever sold) has never been accounted for. Then there is another fact that appears to dismiss the hoax theory, for the stones were first seen and recorded in 1525 by Jesuit missionary Father Simon who accompanied Francisco Pizarro, the sixteenth-century European explorer and conqueror of the Inca Empire. (Samples were later shipped to Spain in 1562.) Why then would the farmer sign such a confession?

Obviously he did not want to remain in custody and, by signing the declaration, the Government allowed him to continue selling the stones from his cart in order to supplement his already meagre income. He would have been foolish to have decided otherwise. The hoax theory has, however, stuck and no serious investigator has revisited the Ica Stones mystery although the stones themselves can be inspected at Cabrera's museum. If Cabrera's views are correct, and on balance they appear to fit the known facts, then a comprehensive picture appears to be developing; carvings on stones in Peru, carvings of toxodons at Tiahuanaco, mantracks in Texas, pictures of dinosaurs in Oregon and elsewhere in America. Yet if our accepted view of history is to be revised, there would need to be considerable further evidence in support of such a revision. And there is.