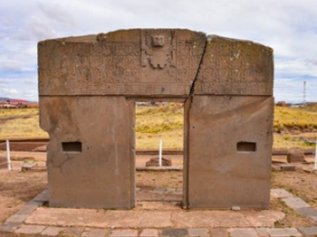 Posnansky realised that this area was an astronomical observatory, however the points, which should have marked the winter and summer solstices, appeared to be slightly misaligned. Posnansky concluded that if the ancient builders had demonstrated an ability to create this magnificent city with its precision engineering, it would be unlikely that they would have botched such a fundamental and important feature. Science, as ever, lent a hand to solve the puzzle. Today, the two tropics are 23.5 degrees north and south of the equator, however, over a cycle of 41,000 years, the position of the tropics changes along with the Earth's roll in space (the obliquity of the ecliptic) from 22.1 degrees to 24.5 degrees. Posnansky (below) therefore set about establishing at what point in history the two observation points were correctly aligned with the enclosure. His result did not make for comfortable reading, for he concluded that the Kalasasaya was constructed some 15,000 years BCE. (48) Actually he was wrong. But not very wrong. Of course it may well be that the ancient builders, whoever they were, (remembering that the city was constructed before the distant memory of even the Incas) simply made a clumsy attempt at building the enclosure. 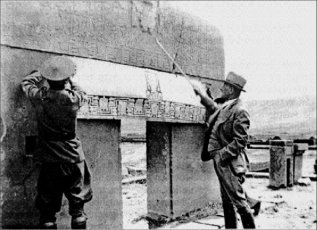 This appears unlikely, and together with information that the Sphinx and the pyramids have already pushed back our accepted view of when mankind was in a position to undertake vast construction and astronomical projects, an early date may well be valid. Posnansky's work was rejected at first, however his research and conclusions came to the attention of a four man German Astronomical Commission whose purpose was to study archaeological sites in the Andes. This team, led by Dr Hans Ludendorff of the Potsdam Astronomical Observatory studied the Kalasasaya between 1927 and 1930. The team concluded that Posnansky was basically right, although they considered that construction probably took place 9300 years BCE rather than Posnansky's favoured 15,000 years. (49) There was also other evidence to support the early dating of the city. One of the most famous features of the ancient city is the 'Gateway to the Sun'.

This feature, nearly ten feet high, 12.5 feet wide and carved out of a single block of stone is adorned with pictures of various animals. Two of which are intriguing. One of the pictures is of an elephant, for elephants were unknown on the American continent; there have been no such animals since about 10,000BCE when a creature with tusks and trunk, the Cuvieronius, became extinct. Yet someone had seen such a beast and carved its image onto the Gateway, supporting Posnansky's and others redating of the founding of the city. The second picture was recognised by Professor Denis Saurat of France. He noted what was quite clearly the head of a toxodon, a prehistoric animal now extinct. According to old (Linnean) classification, the Toxodon and the family Toxodontidae were South American notoungulates of the Pliocene and Pleistocene eras. (The Pliocene Epoch preceded the Pleistocene and ended about 1.6 million years ago).

Is the ancient city of Tiahuanaco, the oldest city in existence? It is believed the city of Tiahuanaco preceded the great Inca Empire. Peruvian archaeologist Arthur Posnansky, found evidence in this ancient Bolivian temple complex, that could date it back to more than 17,000 years old. Tiahuanaco is now 12 miles from Lake Titicaca, however it is believed that at some point in its past Tiahuanaco was actually a port on the lake before the waters preceeded. Interesting structures have been found at the bottom of Lake Titicaca.

Its discoverers stated "We can now say that the existence of pre-Columbian constructions under the waters of Lake Titicaca is no longer a mere supposition or science-fiction, but a real fact ... the remnants found show the existence of old civilizations that greatly antecede the Spanish colonization. We have found temples built of huge blocks of stone, with stone roads leading to unknown places and flights of steps whose bases were lost in the depths of the lake amid a thick vegetation of algae." This video documentary of the city of Tiahuanaco (Below) offers you the opportunity to explore this ancient city from the comfort of your own home!

(47)   Royal Commentaries of the Incas Reproduced in Hancock, Fingerprints of the Gods pp72-73.