Not so, retorted Dr. Jurgen Spanuth, who was familiar with Plato's account of Atlantis. "Neither Thera nor Crete lies in the Atlantic ... Neither island lies at the mouth of a great river, neither was swallowed up by the sea and vanished ... in fact this great breakthrough in archaeology is a bubble that burst long ago." Spanuth wasn't having any nonsense about some mythical lost continent lying somewhere in the Mediterranean. Absolutely not. No, as far as he was concerned, Atlantis was to be found on the sunken islands near Heligoland off the northwest German coast. He attempted to prove his theory in his 1976 book Atlantis of the North but, of course, could not.

History advises us of other submerged archaeological remains in the European area. Pliny the Elder and Strabo make reference to the Etruscan city of Spina in the Adriatic, which was once a thriving metropolis of trade and culture, but now completely submerged. Similarly, Dioscuria, an ancient Greek port of considerable size is now beneath the surface of the Black Sea. (1) Other nominations for the location of Atlantis within the Mediterranean have included a site off the coast of Morocco where scuba divers chasing fish discovered a well-built 9-mile long under water wall traversing an underwater mountain. These ruins were investigated by Dr. J Thorne who also noted the existence of roads going still further down the mountain into the inky depths of the sea.

However, T C Lethbridge, a Cambridge archaeologist and psychical researcher, believed that the missing civilisation's home could have been located at Tartessos, which lay between two rivers in southern Spain, just outside the straits of Gibraltar (the Pillars of Hercules.) It is believed that the Carthaginians conquered this rich and civilised city before being destroyed by the 6th Century BCE, however it was reported to have written records that went back to 6000 year before its disappearance (2). However, despite these romantic notions, there is no real evidence that Europe or its environs could have been the location of the missing civilisation. Indeed Plato, who had suggested the idea of an Atlantis, had actually stated that the alleged colony lay beyond the 'Pillars of Hercules' at Gibraltar. And there appears to be some evidence that it may well have done. The Azores are a group of islands lying 'beyond Gibraltar' that have frequently been proposed as a possible location of the lost civilisation.

The first person to make such a proposal was Ignatius Donnelly (1831-1901). Donnelly was a respected statesman, who served in the US Congress from 1863 to 1869 and wrote several works, including a treatise on Atlantis, the Antediluvian World. In that work he stated: "Deep sea soundings have been made by ships of different nations; the United States ship Dolphin, the German frigate Gazelle, and the British ships Hydra, Porcupine and Challenger have mapped out the bottom of the Atlantic [Challenger map below], and the result is the revelation of a great elevation, reaching from a point on the coast of the British Islands southwardly to the coast of South America, at Cape Orange, thence south-eastwardly to the coast of Africa and thence southwardly to Tristan d'Acunha. ... The submerged land ... rises about 9000 feet above the great Atlantic depths around it, and in the Azores, St. Paul's Rocks, Ascension, and Tristan d'Acunha it reaches the surface of the ocean." (3). 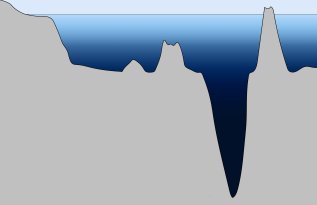 Evidence that this elevation was once dry land is found in the fact that the "inequalities, the mountains and valley's of its surface, could never have been produced in accordance with any laws for the deposition of sediment, nor by submarine elevation; but, on the contrary, must have been carved by agencies acting above the water level." (4) Donnelly concluded that the area was the probable location of the missing Atlantis. The then British Prime Minister, William Gladstone, was so impressed with Donnelly's finding's that he sent a letter of appreciation on publication of the book, and even went so far as to request that the British Parliament approve the use of the Royal Navy to search the area for evidence of the lost civilisation. Unfortunately for Donnelly, the fleet was engaged elsewhere at the time and so the search never took place. (Unfortunately for Shakespeare, Donnelly also became famous for discovering a cipher in the bard's work suggesting that he had not written all that he was credited for, and that Francis Bacon was the true author of some of the texts.)

The Azores, themselves, are constantly subject to volcanic activity and it may well be that such volcanic activity could account for the disappearance of an entire civilisation just as it had in Crete. Volcanic activity cannot just make living conditions untenable, but is also known to have a significant impact on the land and seascape. For example, in 1808 a volcano rose in San Jorge to a height of several thousand feet, and in 1811 a volcanic outpouring created a large island which was called Sambrina during its short above-water existence before it sank again beneath the sea. The Azore islands of Corvo and Flores have also constantly changed shape over the centuries, with large parts of Corvo presently under the sea (5).