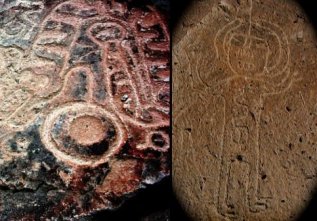 Pliny the Elder (AD23-79) refers to 'gleaming beams in the sky' in his De Rerum Naturae, which describes how, in 66BCE, a 'spark' fell from a star to the Earth, became as large as the Moon, and then, shrinking in size returned to the sky. Inevitably we can only speculate as to what was seen. Others who believe in ancient contact have presented cave and rock paintings in support of their arguments. Such pictures have been quickly dismissed by others who claim that they are merely pictures of hunters wearing ceremonial head-dresses or masks as a ritual part of their culture. Whilst this may be an acceptable explanation, it does not account for the similarity of pictures from cultures on opposite sides of the oceans thousands of years ago.

For example, the picture (below) is from a pre-historic rock carving near Capo di Ponte in Italy, whilst the picture (above) is from the Toro Muerte Desert in Peru, on the other side of the Atlantic Ocean, yet the headgear drawn is almost identical. Of course, too much can be read into a couple of primitive pictures, if that's all that existed, but it in fact there are other strange representations noted in pictures and images throughout the world. For example, this ancient aboriginal cave drawing (above) from 5000 years ago appears to show strange beings with non-human features. 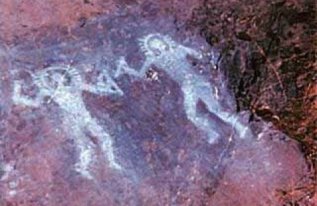 In 1961, the Russian astronomer Alexander Kazantsev brought to the attention of the readers of the then Soviet magazine Smena a discovery made by Henri Labote in the Tassili plateau in the Sahara desert. Labote had found sculpted rocks showing figures with strange rounded heads and other mysterious scenes. These sculptures have been dated to circa. 6000BCE (10). These images are all the more remarkable because of their similarity to the costumes worn in rituals of the Kayapo Indians of Brazil, a tribe that has existed for at least 4000 years. This tribe's rituals commemorate Gods descending from the heavens bringing with them advanced knowledge and skills. Similarly a 3000-year-old statue found on the Equador-Bolivian border appears to represent a humanoid in a space suit. Yet caution has to be advised when considering these ancient images for we can only cast modern day man's eyes over them and offer a modern interpretation of what our ancestor's were attempting to record. 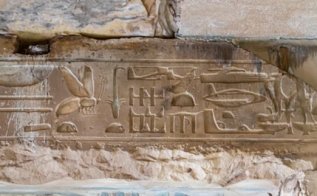 For some of the images, however, our knowledge of past cultures can offer a better insight into what the artists are trying to portray. For example, at first glance, the Egyptian mural (above) appears to show in the upper left-hand area a helicopter, with the upper right image appearing to be a boat or even a submarine. The image also has images of objects that resemble an airplane (or even a UFO) and the bottom image could be taken as a jet-plane. Yet, in fact, the hieroglyphs are not a record of ancient knowledge of machines similar to modern technology, but merely a co-incidental combination of quite common ancient Egyptian symbols. 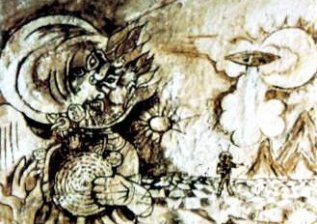 Nevertheless some of the ancient images are quite intriguing. Take for example this cave painting (above) from circa 2000BCE. found on the Russian-Chinese border. It could of course be argued that our modern eyes can only interpret pictures in certain ways.However (and perhaps falling into this trap) it appears that the figure closest to the viewer is clutching some form of dial, the furthest away individual has a helmet on with antenna, and what appears to be a UFO under some form of propulsion hovering above them both. Few of the features in this picture appear compatible with images that should have formed the everyday world of ancient man. The above picture appears all the more convincing when compared with the plate (see part IV below) which appears to show a type of alien known as a 'Grey' and a 'UFO'. This plate is thousands of years old, however the idea of 'Greys' is supposedly a totally modern concept, first featured in Hollywood blockbusters.