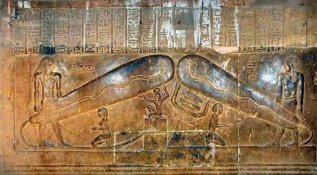 Confirmation of the invention as an electric cell came from Dr. Arne Eggebrecht, an Egyptologist from Hildesheim in Germany and from science historian, Willy Ley, working with of the General Electric High Voltage Laboratory in Pittsfield, Massachusetts. Ley constructed a duplicate model of the artefact and discovered that when copper sulphate, acetic acid or citric acid were added, the cells produced between 1.5 and 2 volts of electricity. Generation of electric current by the same means was not achieved by our modern civilisation until the early 19th century. The Baghdad Battery was not a 'one-off' with four similar clay pots containing copper cylinders being unearthed in a hut near Baghdad. In these pots were thin iron and copper rods which may have been used to connect themselves together to deliver a higher voltage. Ten other cells were also uncovered at Ktesiphon by Professor E. Kuhnel of the Staatliches Museum in Berlin.

Having established that early man knew of, and used electricity, the strange engravings at different locations within the Late Ptolemaic Temple of Hathor at Dendera in Egypt become easier to explain. In chamber seventeen of this temple, there is a panel that appears to depict Egyptian priests 'operating' tube like devices. Each tube has something extending its full length inside. In the opinion of a classical archaeologist, Dr. John Harris of Ashmolean Museum of Oxford University, there is nothing out of the ordinary in this, and he believes the 'something inside' is an image of a serpent. He argues that the 'snake-stones' were set up on either side of entrances to temples or rooms assigned for a snake cult.

However Swedish writer, Ivan Troeng, who knew little of Egyptian lore, noted in his book Kulturer Fore Istiden that "the picture ...obviously shows electric lamps held by high tension insulators". This idea was explored further by a fellow Swede, engineer Henry Kjellson in his book Disappeared Technology (Published as Forvunen Teknik). Kjellson noted that in the hieroglyphs, these 'snakes' are translated as 'seref', which means to glow. Kjellson therefore concluded that there is some form of electrical current involved in the apparatus depicted. In the scene, to the extreme right there is a box on top of which is sitting an image of the Egyptian god Atum-Ra, which identifies the box as the energy source.

Attached to the box is a braided cable which electromagnetics engineer Alfred D. Bielek identified as a copy of engineering illustrations used today for representing a bundle of conducting electrical wires. The cable runs from the box, the full length of the floor of the picture and ends at the bases of the tube objects. These objects each rest on a pillar called a djed, which Bielek believes to be a high voltage insulator. Although some scenes in the upper chambers of the temple have been damaged by vandals, other pictures found in a lower crypt are almost perfectly preserved and further add to the puzzle.

In one image, not only are the tubes shown in full operation, but something has been added which may provide a clue to what the tubes were actually for. In several instances, both men and women are shown sitting underneath the tubes, hands held out and cupped, suggesting a receptive mode (below). It has been suggested that they were engaged in radiation treatment. Unfortunately, Bielek, himself is open to greater skepticism, having made, over the years a number of outlandish claims regarding time travel etc that question his authority however, despite these concerns,  the images are certainly open to this interpretation. 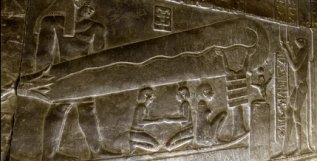 As bizarre as this sounds there is supporting evidence in historical scripts for the need for such treatment. The Mausola Parva or Mahabharata, an ancient Indian sacred writing, refers to a thunderbolt 'a gigantic messenger of death' which reduced whole armies to death and caused the hair and nails of survivors to fall out. Pottery broke without cause and birds turned white. Later foodstuffs became poisoned. The Drona Parva, another ancient Indian text, notes "A blazing missile possessed of the radiance of smokeless fire was discharged. A thick gloom suddenly encompassed the heavens. Clouds roared into the higher air, showering blood. The world, scorched by the heat of that weapon, seemed to be in fever." Another passage of the text compares the detonation with a flare of ten thousand suns (9).

Of course this may simply be an account which to modern ears sounds remarkably like atomic fall-out but isn't, yet there is residual supporting physical evidence. For example the surface of the Gobi Desert near Lob Nor lake is covered with vitreous sand - the result of China's atomic testing - but the desert had other areas of glassy sand which have been present for many thousands of years. The source of this intense heat in pre-history remain as unknown. There are also ancient burnt stones and boulders in the Sinai desert that have not been adequately explained.

It is difficult to believe that mankind itself possessed atomic technology however there is evidence to suggest that he may have possessed more mundane, but nevertheless still forbidden (time-wise), weaponry. The source of these claims stems from this apparently unremarkable several thousand-year-old skull of an aurochs, a type of bison now extinct at the Russian Paleontological Museum in Moscow. What is remarkable, however, is that in the forehead of the animal there is a small round hole. A hole with an almost polished appearance - and without radial cracks.

Not only did the infrastructure of some buildings compare favourably with modern day equivalents, but also their furnishings: The prehistoric city of Catal Huyuk in Turkey is over 8,500 years old, yet pieces of carpet have been found in the ruins that could compete well with the best woven carpets available today. Such skills were equally evident in a discovery made by Professor Luther S. Cressman of the University of Oregon who came across two hundred pairs of skilfully made woven-fibre sandals in Lamos Cave in east Nevada. When a carbon-14 test was made, the sandals were found to be well over 9000 years old (13).