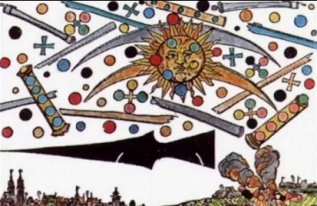 It will be remembered that other images of UFOs and alien type figures and astronauts also featured on the stones at Ica, whose origins are lost in the depths of time. One of the earliest 'UFO' reports came from Ancient Egypt. Writer Brinsley Le Poer Trench quotes in his book Sky People from a papyrus found amongst the papers of Professor Alberto Tulli, former director of the Egyptian museum at the Vatican. The papyrus was from the original annals of Pharaoh Thutmose III (d.1436BCE), the grandfather of the intrepid Thutmose IV who had investigated the pyramids. Unfortunately it was badly damaged with many of the hieroglyphics being unreadable. Despite this Prince Boris de Rachewiltz was still able to offer a translation:

"In the year 22, of the third month of winter, sixth hour of the day ... the scribes of the House of Life found it was a circle of fire that was coming in the sky ... it had no head, the breath of its mouth had a foul odour. Its body one rod long and one rod wide. It had no voice. Their hearts became confused through it: then they laid themselves on their bellies ... they went to the Pharaoh ... to report it. "His majesty ordered ... has been examined ... as to all which is written in the papyrus rolls of the House of Life. His majesty was meditating on what had happened. Now after some days had passed, these things became more numerous in the sky than ever. They shone more in the sky than the brightness of the sun, and extended to the limits of the four supports of the heavens ... Powerful was the position of the fire circles. The army of the Pharaoh looked on him in their midst. It was after supper. Thereupon, these fire circles ascended higher in the sky towards the south." (11).

There is also a written account of a 'contact'between humans and 'space' people that is said to have taken place during the reign of Charlemagne (742-814 AD). According to one account (12), a spacecraft took a group of humans into space and later returned them, only to find those left behind were convinced that the humans were members of the 'space race' who were viewed as sorcerers. The returning humans were seized, tortured and many put to death. The contemporary account records, "one day, among other instances, it chanced at Lyons that three men and a woman were seen descending from these aerial ships. The entire city gathered about them, crying out that they were magicians and were sent by Grimaldus, Duke of Beneventum, Charlemagne's enemy, to destroy the French harvests. "In vain, the four innocents sought to vindicate themselves by saying they were their own countryfolk, and had been carried away a short time by miraculous men who had shown them unheard of marvels, and had desired them to give an account of what they had seen."

It appears that even Christopher Columbus witnessed UFO sightings or anomalous aerial phenomena. He was on the deck of the Santa Maria at about 10pm on 11th October 1492 when he saw a "light glimmering at a great distance." He summonsed another member of the crew who also watched as the light vanished and reappeared repeatedly. The following century, on 4th April 1561, an aerial battle apparently took place over the city of Nuremberg (above). A contemporary account made reference to a "very frightful spectacle" in which luminous globes, crosses and tubes appeared to fight one another for about one hour in broad daylight. All then fell to the ground 'as if on fire'. The citizens of Nuremberg believed they had been given a divine warning to improve their sinful ways. 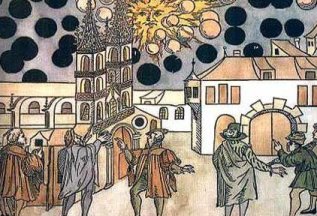 Then just five years later, a similar event of UFO sightings occurred in Basel, Switzerland and is represented in the 16th century woodcut (above). On this occasion, dark balls similar to those seen at Nuremberg filled the sky. "Many became red and fiery, ending by being consumed and vanishing" wrote one Samuel Coccius who reported the events of 7th August in the city's gazette. Such accounts are not limited to Europe. Records of strange lights over Japan go back at least to the 10th century whilst in May 1606 residents of the (former) capital of Japan, Kyoto, saw a succession of fireballs in the sky. One of them hovered near the Nijo castle in front of a host of witnesses spinning like a wheel (13). Of course we can never know exactly what was seen, it may well have been a little known phenomena called 'ball lightening'however it is difficult to conceive of any natural event that could lead to an observer detailing an event "in which luminous globes, crosses and tubes appeared to fight one another for about one hour in broad daylight."

Literature from medieval Europe also appears suggestive if not necessarily indicative of UFO sightings. One of the earliest references is in the works of St Gregory, 6th Century Bishop of Tours in France. In his Historia Francorum he related how, in 584AD "there appeared in the sky brilliant rays of light which seemed to cross and collide with one another", while in the following year "in the month of September, certain people saw signs, that is to say rays or domes such as are customarily seen ... to race across the sky."