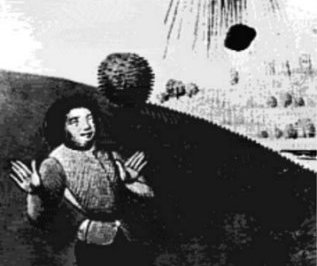 Elsewhere he describes 'golden globes' that on a number of occasions flashed across the French skies. However despite these descriptions, these 'lights' are in all probability natural phenomena. This 11th century painting (above) also appears to show another natural phenomenon, a meteorite. However there are accounts of objects sighted in the sky that seem to fall outside the 'natural' category. One such event took place at about 9.45pm on the evening of 18th August 1783 when four witnesses on the terrace of Windsor Castle observed a luminous object in the skies of the Home Counties of England. The sighting was recorded the following year in the Philosophical Transactions of the Royal Society. 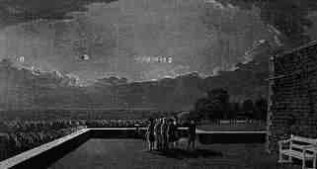 According to this report, witnesses observed an "oblong cloud moving more or less parallel to the horizon. Under this cloud could be seen a luminous object which soon became spherical, brilliantly lit, which came to a halt ... This strange sphere seemed at first to be pale blue in colour but then its luminosity increased and soon it set off again towards the east. Then the object changed direction and moved parallel to the horizon before disappearing to the south-east ... the light it gave out was prodigious; it lit us everything on the ground." The image was captured in this aquatint (above) created by Thomas Sandby (a founder of the Royal Academy) and his brother Paul, both of whom witnessed the event.

Tiberius Cavallo, one of the group who witnessed this event, concluded that all they had witnessed was a meteor, yet the movements and general descriptions of the object seen do not appear to support this idea. In 1809 the Journal of Natural History and Philosophy and Chemistry published the experience of John Staveley, an observer at Hatton Garden, London. This observer was astonished by the sight of 'many meteors' darting round a black cloud during a thunderstorm. "They were like dazzling specks of light, dancing and traipsing thro' the clouds. One increased in size till it became of the brilliancy and magnitude of Venus, on a clear evening. But I could see no body in the light. It moved with great rapidity and coasted the edge of the cloud. Then it became stationary, dimmed its splendour, and vanished." (14)

Historically, ocean UFO sightings have been common. Since 1760 seamen have recounted sightings of unidentified flying objects in the form of a wheel. On 15th May 1879, a passenger aboard a ship, the Vultur in the Persian Gulf watched as "two giant, luminous wheels" spun slowly towards the ocean. They were seen for thirty-five minutes and had an estimated diameter of forty meters and were about four metres apart. A similar phenomenon was reported to have taken place in the same area a year later in the same part of the ocean but from another ship, the Patna (15). 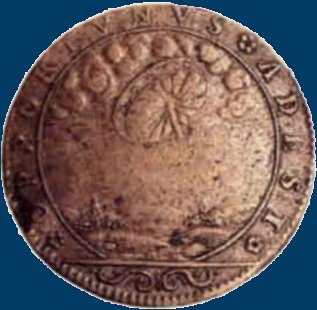 In 1906 as a British steamer ploughed its way through the same gulf near Oman in 1906, an enormous wheel of light appeared. The vast 'wheel, apparently bigger than the ship itself, was revolving in the sky not far above the surface of the water at that point. Vivid shafts of light emitted from the huge wheel and passed right through the steamer, although these beams of light did not disrupt the functioning of the ship. This sighting of 1906 was one of eleven reports between 1848 and 1910 (16). Like most of the accounts, this one remarked on the eerie silence of the phenomenon. It could of course be argued that the sightings were merely visions of seamen too long at sea. Yet the French token (above) was minted in 1680 and appears to show such a wheel spinning in the sky over a hundred years before the first written account that remains available to us. Quite why the token was minted is now lost in history but it has been suggested that the design may be to commemorate a daytime UFO sighting.

In June 1881, the two sons of the Prince of Wales (one of whom was later to ascend to the throne as George V) were steaming off the coast of Australia when the noted an object in the sky that appeared to be an airborne, fully illuminous ship (17). Then on 12th August 1883 it appears that for the first time ever a 'UFO' was captured on camera. It happened at the observatory at Zacatecas, eleven thousand feet up a Mexican mountain. The director, Jose Bonilla, had been observing 'formations' of circular objects that crossed the Sun on a west-east course. He counted 283 of the objects and was able to photograph one with a camera attached to a telescope. Bonilla later reported in the astronomical press, "I was able to fix their trajectory across the solar disk ... some appeared round or spherical, but one notes in the photographs that the bodies are not spherical but irregular in form. Before crossing the solar disk these bodies threw out brilliant trains of light but in crossing the sun they seemed to become opaque and dark against its brighter background." (18) 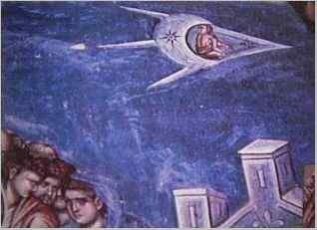 One of the objects Bonilla photographed resembled a "five-pointed star with dark centre". It was suggested that he had only observed birds or insects crossing the path of his telescope, however Bonilla calculated that they appeared not as far out as the Moon. Strange UFO sightings are noted in paintings of biblical scenes. This 14th century fresco (above) shows a man traversing the sky in an egg-shaped vehicle. Another Russian fresco/icon has been interpreted as showing Jesus entering (or leaving) a vehicle which seems to emit rocket-like rays that throws (or protecting their eyes by throwing themselves) the near crowd to the ground. However it is prudent to be cautious when considering such biblical images, for the Bible yields dozens of stories that later painters could interpret as space vehicles.