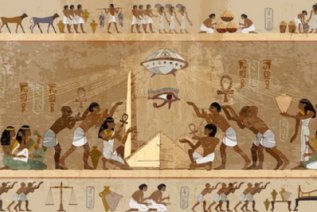 These, then, are the two known accounts of how the Dogon received their knowledge of Sirius B. Whilst Sagan's theory has more immediate appeal, it does not account for a 400 year old Dogon artefact that apparently depicts the Sirius configuration, nor the ceremonies held by the Dogon that can be traced back to at least the 13th Century to celebrate the cycle of Sirius A and B, nor how they knew about the super density of Sirius B, a fact only discovered a few years before the anthropologists recorded the Dogon story. These facts are enshrined in ancient Dogon rituals, portrayed in sand drawings, built into their sacred architecture and can be seen in carvings and patterns dating back hundreds if not thousands of years. So, how can this knowledge be accounted for? It certainly predates the modern 'discovery' of Sirius B by hundreds of years and therefore any talk of westerners contaminating the Dogon traditions becomes irrelevant.

Yet it is unlikely that if the Dogon had had early contact with an extraterrestrial race that this would have happened in isolation. We know that the Dogon originated elsewhere in Africa spreading out to Mali by the 13th to 16th centuries. There should therefore be evidence of this contact, if it did happen, in the traditions of other related cultures. And there is, for the creatures described by the Dogon also feature in Babylonian, Greek and Sumerian mythology. From Berossus, a Babylonian priest, there is a description of creatures known as the Annedoti, the 'Repulsive Ones'. These Annedoti were fishmen who introduced civilisation. The first and most famous of these was called Oannes or Oe, who instructed the Babylonians "in everything which could tend to soften manners and humanise mankind" (5).

Fishbodied aliens are also featured in Greek mythology, notably in the island of Rhodes, with its culture-bearing gods, the Telchines. Diodorus Siculus, the Greek historian, wrote that they were "the discoverers of certain arts and introduced other things which are useful for the life of mankind." (6). Other texts speak of them being "submarine magic spirits". They had "dog's heads and flippers for hands" (7). The Philistines also worshipped "Dagon and Atargis"; two amphibian deities who had human bodies but the tails of fish.

There is also some evidence to tie the Dogon claims into Egyptian mythology. The Egyptian dog god Anubis is often identified with Osiris, companion of the goddess Isis. Temple concludes that as Isis herself was identified with Sirius, it is reasonable to suppose that her companion was identified with the companion of Sirius, suggesting that the Egyptians knew of the existence of Sirius B. Temple realised the implications of his work: "When I started writing this book [The Sirius Mystery] in earnest in 1967, the entire question was framed in terms of an African tribe called the Dogon ... the result in 1974 is that I have been able to show that the information which the Dogon possess is really more than 5000 years old and was possessed by the Ancient Egyptians in the pre-dynastic times before 3200BC." (8)

It is this Egyptian connection that is so intriguing. We have already seen that from no-where, the Egyptians suddenly formed a technologically proficient society with astronomical, mathematical and other knowledge that should have been unknown to them. Could the basis of Von Daniken's claims (as opposed to the evidence he draws on to support them) be accurate? There is one piece of scientific fact that could prove or disprove the claims once and for all, for the Dogon speak of a third star, Sirius C, around which the Nommos planet revolves. If the existence of this star is verified then, the rest of the Dogon claims would have to be taken as probable fact. And it was. In 1995.

So what we have is a wealth of information regarding possible extraterrestrial contacts with the planet Earth, and when put together with the Dogon claims, the puzzles over forbidden knowledge, and pictorial evidence, a convincing case appears to emerge. It is all too easy to assume that the extraterrestrial phenomenon is a product of a latter-day television age and gullibility. Yet sightings of mysterious objects in the sky go back into the depths of history. Of course the further one goes back, the more fact, myth, culture and religious illustration become blurred, however there are some 'facts' that defy reasonable explanation. One of the earliest possible 'records' of extraterrestrial contact was discovered by Tschi Pen Loa formerly of the University of Peking. He found drawings some 47,000 years old on a Hunan Mountain and on an island in Lake Tungting. These granite pictures showed people with large trunks and cylindrical objects in the sky on which similar figures are seen standing (9).

However probably the earliest authenticated report of a UFO can be found in an ancient Indian text called the Samarangana-Sartradhara that dates back to at least 500BCE. In one passage of this text, there is a description of curious machines called vimanas, which can fly and be controlled by pilots. The same devices are described in the Hindu epics Mahabharata and Ramayana as military machines with the capability of carrying 'death' to anywhere in the world. Roman writers make reference to strange sights in the sky. Livy (59 BCE-AD 17) described a 'sighting' in 214 BCE at Hadria in Italy that looked like an alter in the sky.