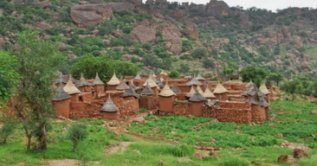 In a remote, rocky, desolate and acrid region of Western Africa, a tribe called the Dogon scratch out a way of life that has changed little over the centuries. With traditions firmly rooted in agriculture, western technology has no place in their lives, although their philosophy and religion is both rich and complex. The exact origin of the Dogon tribe is lost in history, however they are known to have settled in the Bandiagara Plateau, at the Southern edge of the Sahara desert (where they remain today) some time between the 13th and 16th centuries. They are originally believed to have been of Egyptian descent. Today the tribe has a population of 600,000; 138,000 of whom live in Burkina Faso, with the majority of 462,000 living in Mali itself. The Dogon way of life is steeped in astronomical tradition based on a knowledge kept by the tribe's priests that dates back to 3200 BCE. It is this knowledge that makes the tribe so remarkable, for they appear to know facts not supposedly known to man until the twentieth century.

The Dogon have long held that the star Sirius, some 8.7 light years away, has a companion star which is invisible to the human eye. They state that this companion star, which rotates on its axis, has a 50-year elliptical orbit around the visible Sirius and is extremely heavy. They also have knowledge of the rings of Saturn, Jupiter's satellites and other detailed astronomical data some, of which, it has to be acknowledged is inaccurate. This knowledge was first recorded by two French anthropologists, Marcel Griaule and Germain Dieterlen following discussions with four Dogon priests in the 1930s. Perhaps none of this seems remarkable, however Sirius B was only seen for the first time by telescope in 1970 when photographed by Irving Lindenblad of the US Naval Observatory. Yet the Dogon had apparently known about this second star for millennia. The renowned astronomer, Carl Sagan concluded that the Dogon could not have acquired their knowledge without contact with an advanced technological civilisation. He suggested, however, that the civilisation was terrestrial rather than extraterrestrial in origin (1).

Sagan believed that the Dogon gained their knowledge from western travellers who visited the tribes during the 1920 and 1930s. His view is that these travellers would have discussed astronomy with the Dogon priests who would then have weaved this new information into older traditions, which in turn, mislead the anthropologists. However, this is purely conjecture, accurate though it may be. It is true, however, that there have been French schools in that area teaching geography and natural history in their curriculum since 1907 (the Republic of Mali was formerly known as French Sudan). It has also been noted that there has been a nearby Muslim University at Timbuktu since the 16th century and evidence that some members of the Dogon fought side by side with the French during the First World War (2). Could these have been the sources of the Dogon knowledge? 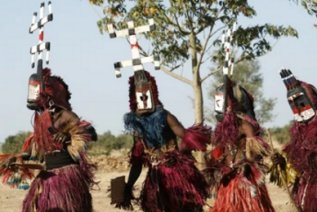 Robert Temple, author of The Sirius Mystery thinks not. "The two French anthropologists [Griaule and Dieterlen] started their work in 1931, and they are positive that the Dogon knew details about Sirius B when they arrived Eddington revealed the superdensity of Sirius B around 1926 ... so there is a narrow period when one has to imagine some group of amateur Western astronomers rushing out to Mali and implanting this knowledge in the presumably pliant minds of the Dogon"(3). The Dogon account for their 'forbidden' knowledge, however, appears equally unlikely. They claim that a people from the Sirius system called the Nommo visited Earth thousands of years ago. The Nommos were described as ugly, amphibious creatures that resembled mermen and mermaids. (Incidentally, it should be remembered that humans and other mammals originally evolved from amphibians.)

According to Dogon legend, the Nommos lived on a planet that orbits another star in the Sirius system. They landed on Earth in an 'ark' that made a spinning descent to the ground with great noise and wind. Temple gives the following account of this event. "The [Dogon] descriptions of the landing of the ark are extremely precise. The ark is said to have landed on the earth to the north-east of the Dogon country, which is where the Dogon claim to have come from originally. The Dogon describe the sound of the landing of the ark. They say the 'word' of the Nommo was cast down by him in the four directions as he descended, and it sounded like the echoing of the four large stone blocks being struck with stones by the children, according to special rhythms, in a very small cave near Lake Debo.

"Presumably a thunderous vibrating sound is what the Dogon are trying to convey. One can imagine standing in the cave and holding one's ears at the noise. The descent of the ark must have sounded like a jet runway at close range." (4) The Dogon claim that not only did the Nommos give them knowledge about Sirius B, they also advised that Jupiter has four major moons, that Saturn has rings, and that the planets orbit the Sun. Much of this knowledge was not accepted or known until recent centuries.