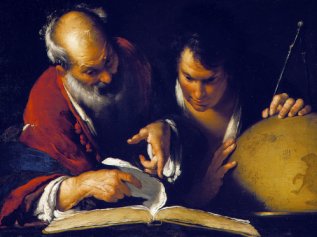 Flying craft also feature in ancient texts from around the world. Dr. Benjamin Olshin wrote in his Mechanical Mythology: Private Descriptions of Flying Machines as Found In early Chinese, Korean, Indian and Other Texts, "In various kinds of Asian and South Asian texts, we find references to flying machines and aerial vehicles. Chinese and Indian stories tell of peoples or individual artisans who constructed devices for travelling through the air. The stories take many different forms, including quite fanciful romances. Others present a picture of inventors taking pains to understand the basic principles of flight, and crafting machines of wood to achieve this goal." (28). The mathematical skill demonstrated in the design and construction of the Egyptian glider serves as a reminder of the extent of mathematical and other knowledge available to ancient man, and only 'rediscovered' in the last few hundred years. Pythagoras (6th Century BCE) taught in his school in Crotona that the Earth was a sphere. Aristarchus of Samos (3rd Century BCE) realised that the Earth span round the sun and he even added that all the planets did likewise.

Eratosthenes (3rd Century BCE - above), the custodian of the Alexandria Library, worked out the circumference of the planet. He noted that due south at Syene the sun was directly overhead on midsummer's day and seven degrees from vertical at Alexandria on the same day. From this and knowledge of geography he was able to work out the figures he required. There was a discrepancy of only 80km between his figure for the polar diameter and the modern figure. "The Earth spins on its axis once in 24 hours." Heraclides of Pontus noted in the 4th Century BC. Seleucus of Erythrea (2nd Century BCE) also recognised the rotation of the Earth and its orbit around the sun. Up until Victorian times, scholars and clerics in the west believed that the Earth was only a few thousand years old, yet ancient Brahmin texts estimated that the universe was 4,320 million years old; today we believe it to be around 4,600 million years. 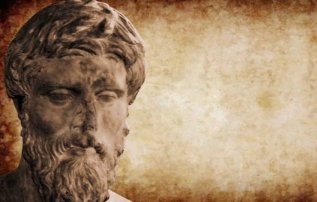 The ancient Indian astronomical text Surya Siddhanta recorded that the Earth 'is a globe in space'. In the book Huang Ti-Ping King Su Wen, Chi-Po advised the Yellow Emperor (2697-2597 BCE) that 'the Earth floats in space'. Over four thousand years later, Galileo was condemned for proposing such heresy. Plutarch (above) cites Aristarchus (3rd Century BCE) "The earth revolves in an oblique circle while it rotates at the same time about its own axis." (Plutarch also made a suggestion about our Moon: "If you regard her as a star or a certain divine and heavenly body, I am afraid she will prove deformed and foul.")

The ancient book of India, Rig-Veda makes reference to the 'three earths' one within the other. Indeed there are three sections to the Earth; the core, mantle and crust. Diogenes of Apollonia (5th Century BCE) stated that meteors "move in space and frequently fall to the earth". Yet the respected 18th Century scientist, Lavoisier, stated what appeared to be the obvious, "it is impossible for stones to fall from the sky because there are no stones in the sky." The extent of our ancient knowledge is hinted at when texts such as the so called Emerald Tables of Hermes are considered. The exact dating of this document is unclear, however whilst some date it from the Middle Ages, others such as 18th Century scholar, Dr. Sigismund Bacstrom consider that the Emerald Tables date back to 2500 BCE.

The Tables begin "What is above is like what is below, and what is below is like what is above to effect wonders of one and the same work." Researchers have interpreted this as meaning there is a mirror-like similarity between the world of the atom, with electrons spinning round protons as planets spin around suns, and stars and galaxies. "Separate the earth from the fire, the subtile from the gross, carefully and skilfully. This substance ascends from the earth to the sky, and descends again on the earth - and thus the superior and inferior are increased in power." This section of the tables has been interpreted as the process of splitting the atom and the associated dangers. A further paragraph of the tables indicates an ancient belief in the vibratory character of matter and the waves and rays that penetrate all substances, "This is the potent power of all forces for it will overcome all that is fine and penetrate all that is course because in this manner was the world created. (29)"

Of course, all texts are open to interpretation and misinterpretation, yet if the above interpretations were accurate, they certainly would not stand out in isolation from other contemporary knowledge. Democritus stated nearly two and a half thousand years ago "in reality there is nothing but atoms and space." Lucretius a 1st Century BCE Roman scholar wrote about atoms "rushing everlastingly throughout all space". They undergo "miriad changes under the disturbing impact of collisions". He also noted that it is impossible to see atoms as they are too small.

In his On the Nature of the Universe Lucretius gives his opinion that "there can be no centre in infinity" and "the way up and the way down, are one and the same (30)." Zeno of Elea (5th Century BCE) demonstrated an awareness of relativity with this puzzle, "If the flying arrow is at every instant of its flight at rest in a space equal to its length, when does it move?" (31) The atomic structure of matter is also mentioned in the Brahmin treatises Vaisesika and Nyaya. The Yoga Vasishta states "There are vast worlds within the hollows of each atom, multifarious as the specks in a sunbeam." Philolaus (5th Century BCE) referred to an 'antichthon' or anti-earth, an invisible body in our solar system, however it is only recently that the concepts of anti-matter and parallel worlds have been introduced to modern science. Plato wrote in the Statesman about an oscillating universe periodically reversing its time arrow and sometimes moving from the future into the past (32). The Brahmin texts also shed light onto man's ancient knowledge by their divisions of time. Last century in parts of northern England and elsewhere, clocks often did not have a minute hand, the hour hand sufficing.