After all, until the busy and hectic twentieth century, the counting of minutes was somewhat superfluous. Yet the Siddhanta-Ciromani subdivides the hour until it arrives at the truti equivalent to 0.33750 of a second. Not only are we unaware of why such a small measure of time was required in antiquity, but we are also unable to explain what could have measured such timescales with that degree of accuracy (33). According to the Pundit Kaniah Yogi of Ambattur, Madras, the original time measurement of the Brahmins was sexagesimal. The day was divided into 60 kala, each equal to 24 minutes, subdivided into 60 vikala, each equivalent to 24 seconds. Then followed a further sixty fold subdivision of time into para, tatpara, vitatpara, ima and finally kashta. The kashta was 1/300 millionth of a second! (Incidentally, 1/300 millionth of a second is close to the life span of certain mesons and hyperons.) Who or what required the ancient Hindus to be able to measure time with this degree of accuracy, and why?

Perhaps it is the pyramids after all that provide the clue, for pyramids constructed after the Great Pyramid itself (if it is accepted that it should be re-dated to an earlier epoch) demonstrate an alarming fall in mankind's knowledge and ability. It is difficult to understand how a people who constructed the structure on the Giza plateau with its mathematical marvels, could soon after go on to construct a failure such as the structure at Dahshur above; a pyramid that bent in on itself in order to prevent collapse.

It would make more sense if rather than the Great Pyramid being built at the beginning of time, it was built at the end of a former time, with the knowledge of this former time becoming dissipated through the subsequent centuries. This would also account for the 'fall-off' of scientific, medical and other knowledge and achievements. These then are examples from the historical record suggesting a former knowledge now lost. By themselves they present a powerful case, however if legends of old are also sifted for information, a further delicious insight into the world of ancient man can be discovered. And even if these stories are purely fictitious, then they at least provide an insight into the creative and inventive minds of our forefathers.

Such legends can be found in most civilisations. According to those of the Greeks, Haephestus the Blacksmith of Olympus made two golden statues that resembled living young women. They could move of their own accord and hastened to the side of the lame god to aid him as he walked. If nothing else, the story shows that the concept of automation was present in ancient Greece (34). In China, the description of a mechanical man is contained in the story of Emperor Tachouan. His empress found the statue so irresistible that the jealous ruler of the Celestial Empire gave orders to the constructor to break it up in spite of all the admiration that he himself had for the walking robot.

The legendary Daedalus, father of Icarus, is reported to have constructed human-like figures, which moved of their own accord. Plato, who gave us the story of Atlantis, says that these robots were so active that they had to be prevented from running away (35). Albertus Magnus (1206-1280), the Bishop of Regensburg explained the Milky Way was a conglomeration of distant stars. He was later canonised by the Catholic Church, and wrote extensively on chemistry, mathematics and astronomy. He reported that over a period of twenty years he constructed an android composed of "metals and unknown substances chosen according to the stars (36)." The mechanical man apparently walked, spoke and performed domestic chores ... and spoke. In fact it was reported to never shut up to the point when Albertus' pupil, Thomas Aquinas, one day grabbed a hammer and smashed the machine to pieces. 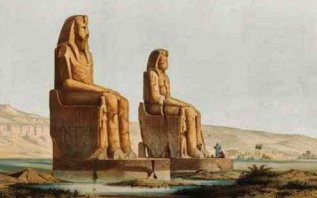 In classical times the Romans in Egypt described the singing statute of Memnon )above) erected about 15OOBCE. Musical sounds were heard when the rays of the rising sun illuminated its head. In AD 130 the Roman Emperor Hadrian listened to this singing monument one morning and heard the sounds three times. Emperor Septimus Severus (AD 193-211) also heard the chants. However an accident befell the statue and after repairs the "music stopped" suggesting that something was damaged during the restoration work (37). This statue can still be seen in Egypt today. The Phoenician Sanchuniathon (c. 1193BCE) and Philo Byblos (AD 150) spoke of 'animated stones'.

The Christian historian Eusebius apparently carried one of these mysterious stones on his chest. The stone reportedly answered questions in a small voice resembling a 'low whistling' (38). Arnobius (died c. AD 327), another Christian Father, confessed that whenever he got hold of a 'speaking stone' he was always tempted to ask a question of it. The answer would come back in a 'clear and sharp voice' (39). The descriptions of these stones make them sound similar to communication devices. The Bible mentions also 'teaphim' or images, figures or heads that answered questions (40). Maimonides (1135-1204) in Les Regles des Moeurs says that "the worshippers of the teraphim claimed that as the light of the stars filled the carved statue, it was put en rapport with the intelligences of those distant stars and planets who used the statue as an instrument. It is in this manner that the teraphim taught people many useful arts and sciences (41)."