Yet there are other indications of ancient knowledge of metalworking. In the courtyard of Kurb Minar in Delhi India stands the Ashoka Pillar, a column of cast iron weighing approximately six tons and standing 23 feet eight inches high, with a diameter of 16 inches. Muslim invaders later destroyed the Garuda and ripped the column from its original setting, re-erecting it in Delhi in the eleventh century. The exact age of the column is not known however it bears the inscription of an epitaph to King Chandra Gupta II who died in 413AD signifying that it is at least 1500 years old. The mystery of the pillar, however, is not its age, nor even its immense size (suggesting a sizeable casting job) but the fact that a piece of iron manufactured around fifteen hundred years ago and subjected to the Indian monsoon rains, winds and temperatures should have corroded and disappeared long ago. The column, however, shows only traces of rust and suggests a technology was available to its makers that is now unknown (23).

Another iron column exists at Kottenforest, a few miles west of Bonn, Germany. Known locally as the Iron Man, it is 4 ft 10 inches above ground and an estimated 9 feet beneath the surface. This column was first mentioned in a fourteenth century document where it was described as marking a village boundary, but there is evidence that it is much older. For associated with the Iron Man is an ancient stone walkway, and the remains of an aqueduct that runs straight towards the column. Again, like the pillar in India, the Iron Man shows only scant traces of rust (24). On the other side of the world there is also evidence of ancient metal working knowledge. Pre-Inca Peruvian ornaments and other objects made out of platinum have been discovered, yet in order to melt platinum, a temperature of c.1755 degrees Celsius is required, and there is no satisfactory answer as to how the ancient Peruvians were able to produce such an intense heat (25).

The ancient Palestinians also appeared to have knowledge of metal hardening techniques. Professor Clifford Wilson, while working for the Australian Institute of Archaeology, noted that one leg of a Palestinian bronze statue of Baal was missing, and when metal workers were commissioned to add a modern one, they were surprised that they could not duplicate the original bronze as it was harder than any they could make (26). 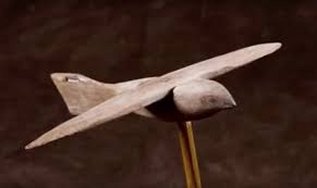 Ancient advanced technologies are evident elsewhere. In 1898 a small model plane was discovered in a tomb near Saqqara, Egypt and was dated to approximately two hundred BCE. At the time of its discovery, the birth of modern aviation was still several years away. The model was sent to the Cairo Museum of Antiquities and was catalogued as Special register No. 6347 Room 22, and then promptly forgotten about. Just over 70 years later, when man had travelled to the Moon, Dr Kalil Messiha, an Egyptologist and archaeologist, came across the model in a box marked 'bird objects' when he was clearing out the museum's basement. The other items in the box were clearly bird figurines, but the model stood out as being different, having characteristics that appeared to resemble parts of a modern aircraft.

Messiha persuaded the then under-secretary of the Egyptian Ministry of Culture, Dr. Mohammed Gamel El Din Moukhtar, to form a committee to investigate the model. The committee was duly established on 23rd December 1971 and consisted of a number of historians and aviation experts. They established that the model's wings were straight and aerodynamically shaped with a span of 7.2 inches. The pointed nose was 1.3 inches long and the body of the craft measured 5.6 inches in length, tapered and terminating in a vertical tail fin. A separate slotted piece on the tail was precisely like the back stabiliser section of a modern plane. The craft was made of sycamore wood and weighed 1.11 ounces (27).

When asked to analyse the ancient Egyptian artifact, several aerodynamics engineers and pilots found that the plane demonstrated a knowledge of aircraft design that had taken European and American designers decades of airfoil experimental work to discover and perfect. The fuselage and wing was of an aerodynamic shape which demonstrated design compensation for camber, and the wind itself was found to be counter-dihedral, providing a powerful lift force. Another feature the experts discovered was that all of its highly accurate integral proportions were present in ratios of 2:1 or 3:1. It appears that the ancient model was the product of significant computation and experimentation.

It could be argued that all this is too much to read into one ancient artifact however more recently several other such models have been uncovered from other tombs. More significantly, as Dr Messiha reminds us, the ancient Egyptians always built scale models of everything they made, with their tombs filled with small detailed temples, obelisks, houses, chariots, ships etc. Perhaps a full sized plane is waiting beneath the desert sands ready to be discovered.