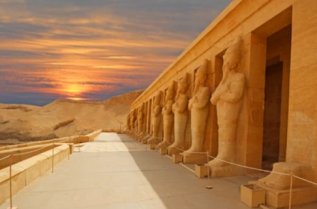 History also records how mankind possessed a medical knowledge not previously suspected. An excavation of mummies from the Valley of the Kings in Egypt (above) found that many of the jaws of the mummies had bridges and artificial teeth (14). Similarly Mayan skulls dug up on the coast of Jaina in Campeche, Mexico also show crowns and fillings in place (15). Recent ancient artifacts discoveries have also shown that Pre-Inca surgeons performed operations on the brain 2,500 years ago. Trepanation is a fairly recent development in modern medicine, yet thousands of skulls in Peru show marks of such successful surgery. When the same operations were attempted at the Hotel Dieu in Paris in 1786, the operations were invariably fatal. Medical knowledge was widespread in our ancient times. Sushruta (5th Century BCE) listed the diagnosis of 1120 diseases. He described 121 surgical instruments and was the first to experiment with plastic surgery (16).The Sactya Grantham, a Brahmin book compiled about 1500 BCE contains the following passage describing the giving of a smallpox vaccination. "Take on the tip of a knife the contents of the inflammation, inject it into the arm of a man, mixing it with his blood. A fever will follow but the malady will pass very easily and will create no complications" (17).

Modern history, however, claims that Edward Jenner (1749-1823) discovered the practise of vaccination. There are also hints of more intriguing medical advancements. The Chinese Emperor Tsin-Shi (259-210 BCE) reportedly owned a magic mirror which could illuminate the bones of the body. When a patient stood before this rectangular mirror which measured 1.76 by 1.22 metres in size, the image appeared reversed but all the organs and bones were visible - an apparent reference to an x-ray machine. The 'magic mirror' itself was reportedly used to diagnose disease (18).

In fact the Chinese appear particularly knowledgeable when it comes to medicine. A Chinese surgeon, Hua T'o carried out operations under anaesthetic over 1800 years ago. The chronicle of Hou Hou Shu of the later Han Dynasty (25-220 AD) reports as follows; "He first made the patient swallow hemp-bubble-powder mixed with wine, and as soon as intoxication and unconsciousness supervened, he made an incision in the belly or the back and cut out any morbid growth. If the stomach or intestine was the part affected, he thoroughly cleansed these organs after the use of the knife, and removed the contaminating matter that had caused the infection. He would then stitch up the wound, and apply a marvellous ointment which caused it to heal in four or five days, and within a month the patient was completely restored to health (19)."

Of one of the most puzzling Chinese artifacts suggesting lost knowledge came to light in China on 1st December 1993 when a workman's spade broke through the roof of a long buried and forgotten tomb. Work was being undertaken to build a sports field for the Jingyi Middle school of Yix-ing City in the Jiang-su Province of China at the time. The police were called in and recognising the find as a tomb, called in the Huadong Historical Relics Working Team who conducted a full-scale investigation. The tomb was later identified as the burial site of a famous general of the Chin dynasty, Chou Chou who lived from 265-316 AD. 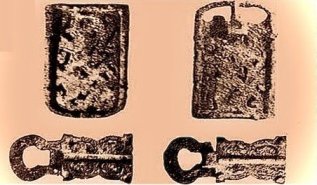 In the tomb were found pieces of pottery, porcelain, scraps of gold and a metal belt fastener. The fastener was examined by the Institute of Applied Physics of the Chinese Academy of Sciences and by the Dunbai Polytechnic. Their analysis showed that the metal of the fastener was an alloy of 5% manganese, 10% copper - and 85% aluminium. The mystery here being that aluminium was not supposed to have been discovered until 1803 and had certainly not been produced successfully in pure form until 1854. Even today, the process of extracting aluminium from bauxite is complicated and involves the use of a Reverbier oven, a refraction chamber and regenerator as well as electrolysis and temperatures exceeding 950 degrees Celsius. The mystery Chinese artifact became known as the Nanjiig Belt (above) and sparked a wave of controversy, which came to an initial end with the Chinese Cultural Revolution of the 1960s. However by that time, western scientists had obtained data on the belt, notably Dr. J. Needham of Cambridge University, author of Science and Civilisation in China. Other researchers followed his lead and in December 1986 a report entitled Aluminium Objects from a Jin Dynasty Tomb - Can They Be Authentic? was published by scientists at the Chemistry Department of the University of St. Andrews, Scotland.

By this time stories were beginning to circulate that the belt had been dropped more recently by robbers. The scientists at St. Andrews, however, dismissed this; "It is difficult to see why they should have left the silver objects in place and carefully inserted pieces of aluminium for the confusion of future excavators. A tomb robber is scarcely likely to have scraps of kitchen utensils about his person and to have discarded them accidentally. It would also need a miraculous breeze to the replace the dust." (20) However, despite dismissing the grave robber theory, they introduced their own hypothesis, as they could not account for aluminium being in existence nearly 1500 years ago. "We are led to suggest," they concluded, "that the aluminium was introduced at an academic prank by a participant who was probably greatly embarrassed when he realised the consequences of his actions. (21)" Despite this guess, for it is no more than that, no academic has come forward to support this theory and the mystery remains. As Arthur C. Clarke comments, "the mystery of the ancient Chinese aluminium belt has worried me for years. Technologically, such an artifact would be almost as anomalous as a medieval transistor radio". (22)

Yet there are other indications of ancient knowledge of metalworking. In the courtyard of Kurb Minar in Delhi India stands the Ashoka Pillar, a column of cast iron weighing approximately six tons and standing 23 feet eight inches high, with a diameter of 16 inches. The column had stood in the Temple of Muttra, capped with a Garuda - an image of the bird incarnation of the god Vishnu.