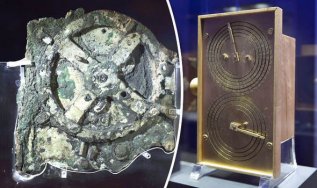 "There is at least one ancient invention that proves beyond all doubt that one civilisation in the ancient world possessed technical knowledge which no modern scientists had previously suspected. As it was found in the sea off Antikythera, a small island north west of Crete, it is known as the Antikythera Mechanism." (1) So wrote renowned author and skeptic Arthur C. Clarke of an artefact that remains a puzzle to our accepted view of world history. In 1900, on the day before Easter Sunday, a team of divers discovered a shipwreck off Antikythera whilst attempting to find sponges. The sunken ship's hull was full of bronze statues and other ancient artefacts that were later retrieved and delivered to the National Archaeological Museum in Athens for cleaning and restoration. It was not until 17th May 1902 that a leading archaeologist examined the artefacts and recognised the outline of cogwheels in one of the lumps of bronze and wood. The writing on the case confirmed that the item had been made in 80 BCE.

In 1958 Derek J. Solla Price, an Englishman who then worked at Cambridge University and who later worked as the Avalon Professor of the History of Science at Yale University in America, examined the mechanism. Using a process for restoring oxidised objects, Dr. Price was able to salvage some of the mass and from these pieces he attempted to rebuild the device. However it was not until 1971 when X-ray photographs were taken of the artefact by the Greek Atomic Energy Commission, that the mechanism's array of meshing gears was finally revealed (2,3). Price remarked that, "nothing like this instrument is preserved elsewhere. Nothing comparable to it is known from any ancient scientific text or literary allusion. On the contrary, from all that we know of science and technology in the Hellenistic age, we should have felt that a device could not exist". (4)

Work on the ancient inventions artefact revealed that on the outside it had consisted of dials set into a wooden box with at least 20-gear wheels inside. The box was covered with inscriptions that included an astronomical calendar. The mechanism also included a system of differential years. A crank spindle set the gears in motion at various speeds, turning pointers on three dials that calculated the rising and setting times and phases of the Moon, and the positions of the planets Mercury, Venus, Mars, Jupiter and Saturn all with a high degree of accuracy (5). "It appears that this was, indeed a computing machine that could work out and exhibit the motions of the sun and the moon and probably also the planets" Solla Price stated (6).

Arthur C Clarke, wrote of the device in 'Technology and the Limits of Knowledge' in 'The View from Serendip', "Looking at this extraordinary relic is a most disturbing experience. Few activities are more futile than the 'what if....' type of speculation, yet the mechanism positively compels such thinking. Though it is over two thousand years old, it represents a level which our technology did not reach until the eighteenth century. If the insight of the Greeks had matched their ingenuity, the industrial revolution might have begun a thousand years before Columbus. By this time we would not merely be pottering around on the Moon, we would have reached the nearer stars.'" (7)

Other ancient inventions have been discovered that further illustrate that our ancestors enjoyed a degree of technology that should have been unavailable to them. One of the most intriguing of these inventions has been called the Baghdad Battery (below). In the late 1930's Dr. Wilhelm Konig, a German archaeologist employed by the State Museum in Baghdad was examining a consignment of finds from a settlement that had once been occupied by the Parthians. Konig wrote "something rather peculiar was found, and, after it had passed through several hands, it was brought to me. A vase like vessel of light yellow clay, whose neck had been removed, contained a copper cylinder,  which was held firmly by asphalt. "The vase was about 15 centimetres high; the sheet-copper cylindrical tube with bottom had a diameter of 26 millimetres and was 9 centimetres long. 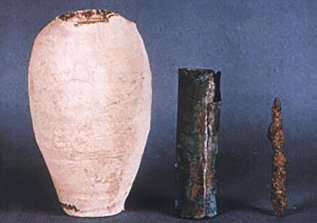 In it, held by a kind of stopper of assault, was a completely oxidised iron rod, the top of which projected about one centimetre above the stopper and was covered by a yellowish grey, fully oxidised thin coating of a metal which looked like lead. The bottom end of the iron did not extend right to bottom of the cylinder, on which was a layer of asphalt about three millimetres deep. "The question as to what this might be received the most surprising answer. After all the parts had been brought together and then examined in their separate parts, it became evident that it could only have been an electrical element. It was only necessary to add an acid or an alkaline liquid to complete the element. (8)" The Baghdad Battery, was constructed between 248BCE and 266AD making it around two thousand years old.