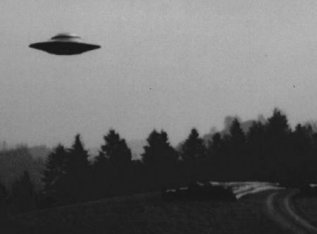 At his funeral, six tall men attended that no-one appeared to know and although photographs were taken of all present, these six men did not appear in the photographs (42). (Being an astronaut has also proved dangerous, with an incredibly high figure 11% of all astronauts that had worked for NASA being dead as of 31st March 1997 (43).) Events at Maury Island also give us a clue to CIA involvement in the UFO phenomenon. According to FBI records on Crisman, Maury Island's main protagonist, disclosed under the Freedom of Information Act and on file at the Assassination Archives & Research Centre (AAC) in Washington, D.C., Crisman was a Captain in the Army Air Corps and had seen active service during the Second World War. From 20th March 1946 to 31st March 1947 he was employed as a 'special investigator' on veteran's matters for the State of Washington. At some point between 31st March 1947 and 21st August 1947, Crisman was either appointed as a Harbour Patrol worker, or more likely as there are no records of him in this position (although this is not to say he didn't hold that job) he collected and sold salvage.

Crisman's activities can then be traced to 21st August 1947 when the FBI carried out a security check on him for an unspecified position with the Atomic Energy Commission - although Crisman never took up the post according to the files. (Note: There was an alleged UFO crash on the Mexican side of the Texas/Mexican border on 6th December 1950. The object hit the ground at such high speed that very little wreckage could be found but what was found was taken to the Atomic Energy Commission.) His life then became something of a confusing puzzle. He was involved in a government programme helping gypsies, (and it is interesting to note that some of the scientists brought to the US under Operation Paperclip had used gypsies for experimentation.) He was later listed as the president of a car lot and an official of at least half a dozen companies that could not be traced to any given addresses; he held a right-wing talk radio show on KAYE Radio in Puyallup, WA, under the pseudonym Jon Gold (the same name he used to write a semi-autobiography novel Murder of a City).

He is recorded as having been an industrial psychologist for Boeing and he was a bishop in the 'Universal Life Church', a shady organisation which seems to have had ties with the CIA, and whose members included old Bay of Pigs veterans such as David Ferrie. (Jim Garrison, District Attorney of New Orleans, believed this 'church' and others was merely a front for the CIA, a theme he expanded upon in a memo he wrote to Jonathon Blackmer, an investigator for the select House Committee in the 1970s into Kennedy's assassination.) In 1968, Garrison, subpoenaed Fred Crisman for his investigation into President Kennedy's death. Garrison strongly believed that Crisman was connected in some crucial way to the men Garrison was trying to indict for Kennedy's assassination. This subpoena identified Crisman as a radio announcer in Tacoma and its associated press release stated "Our information indicates that since the early 1960s [Crisman] has made many trips to the New Orleans and Dallas areas in connection with his undercover work for that part of the warfare industry engaged in the manufacture of what is termed, in military language, a 'hardware' - meaning those weapons sold to the US Government that are uniquely large and expensive (45)."

When Gary Cornwell, Bob Buras and Mike Ewing for the Select Committee on Assassinations interviewed Garrison on 11th August 1978 at his office at the Federal Courthouse in New Orleans, Garrison stated that he viewed Crisman as an important figure, who he would like to investigate further. He stated that Crisman had apparent CIA connections, as well as important right wing connections - and money. Crisman was later interviewed for four hours by Garrison's team. In the 95th Congress at the hearings into select committee on assassinations it was suggested that Crisman was one of the three tramps at Dealy Plaza (46). Garrison later recorded his conclusions about Crisman in a lengthy hand-written memo to Blackmer. "I suggest the only reasonable conclusion is that he was (and probably is, if still around) [he wasn't, having died on 10th December 1975], an operative at a deep cover level in a long-range, clandestine, intelligence mission directly (in terms of our national intelligence paranoia) related to maintaining national security. Crisman emerges as an operative at a supervisory level ... acquired by the apparatus to carry out the menial jobs that are needed to push a current mission forward, a middle man - in the final analysis - between the mechanics who eliminate, and the handy men, who otherwise support a termination mission, on one hand, and the distant, far removed, deep submerged command level on the other."

Operation Paperclip did not become public knowledge until 1973, but Garrison almost compromised it when he arrested a contact of Crisman's, Clay Shaw, on charges of conspiracy to murder President Kennedy. Major Clay Shaw, formerly of the OSS (the forerunner of the CIA), the spy who went on to become general manager of New Orleans's International Trade Mart, an import-export concern with a number of former European war criminals on its board of Directors. Shaw, who after the Second World War rose to deputy chief of staff at a detainment camp for Nazi POWs, met Werner von Braun after von Braun abandoned Peenemunde and travelled south to join the American forces in Germany close to the French border. Clay maintained his relationship with von Braun over the years through their mutual connection with the Defence Industrial Security Command (DISC), an operational arm of the counterespionage division of the FBI and his involvement in Operation Paperclip.