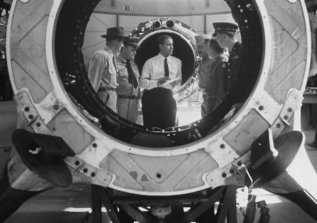 Operation Paperclip was carried out by the Joint Intelligence Objectives Agency (JIOA) and had two aims: Firstly, to exploit German Scientists for American research by rounding up Nazi scientists and taking them to America. and, secondly, to deny these intellectual resources to the Soviet Union (7). (The name 'Operation Paperclip' derived from the fact that those individuals selected to go to the United States were distinguished by paperclips on their files joining their scientific papers with regular immigration forms(8). The Joint Intelligence Objectives Agency (JIOA) then conducted background investigations on the identified scientists, and in February 1947 the Director of the JIOA, Navy Captain Bosquet Wev, submitted the first set of dossiers to the State and Justice Departments for review. These dossiers, though, proved to be damning, with Samuel Klaus, the State Department's representative on the JOIA Board claiming that all the scientists in the first batch were 'ardent Nazis'. The visa requests were consequently denied. (Wev already knew those proposed had Nazi backgrounds for in a memo dated 27th April 1948 to the Pentagon's Director of Intelligence, he wrote "Security investigations conducted by the military have disclosed the fact that the majority of German scientists were members of either the Nazi Party or one or more of its affiliates." (9)

Wev was furious and he fired off a memo to the State Department in March 1948 warning that "the best interests of the United States have been subjugated to the efforts expended in 'beating a dead Nazi horse'" (10). The following month, 27th April 1948, Wev again wrote to his superiors concerned about the delays in approving the German scientists. He stated "In light of the situation existing in Europe today, it is conceivable that continued delay and opposition to the immigration of these scientists could result in their eventually falling into the hands of the Russians who would then gain the valuable information and ability possessed by these men. Such an eventuality could have a most serious and adverse effect on the national Security of the United States." (11)

By this time the Nazi Intelligence leader, Reinhard Gehlen had met with the future CIA Director (26th February 1953 - 29th November 1961), Allen Dulles, and they had hit it off. Gehlen was a master spy for the Nazis and had infiltrated Russia with his vast intelligence network. (In 1942 the future CIA Director Dulles had moved to Bern, Switzerland, as Head of Office of Strategic Services to negotiate with some Nazi leaders who were already convinced they were going to lose WWII and wanted a deal with the US about a possible future war with the USSR.) Dulles was not above pursuing his own agenda with the Nazis, for he had worked with many of them before the war; as a prominent New York lawyer (1926-1942 and again from 1946 to 1950). When Gehlen surrendered to the US, he was taken to Fort Hunt, Virginia, where he and the US Army reached an agreement: His intelligence unit would work for and be funded by the US until a new German Government came into power. In the meantime, should he find a conflict between the interests of Germany and the US, he could consider German interests first (12). 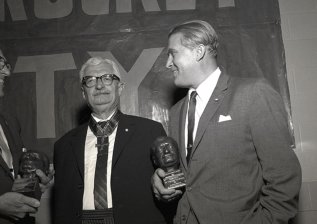 For almost ten years the 'Gehlen Org' as it became to be known, operated safely within the CIA and was virtually the CIA's only source of intelligence on Eastern Europe. Then in 1955 it evolved into the BND (the German equivalent of the CIA) and continued to co-operate with its US counterparts. The scientists immigration problem was then side-stepped with the dossiers being 'cleansed' of incriminating evidence and, as promised, Allen Dulles delivered Gehlen Org, the Nazi Intelligence Unit, to the CIA, which later opened many umbrella projects based on earlier Nazi research. Operation Paperclip also had a part to play in events at Maury Island. Washington State, itself, was the location of several aerospace defence contractors, which were benefiting from the then secret Paperclip Operation. It was also the location of sightings in 1947 of a number of aircraft that looked suspiciously like some that had been seen on Nazi drawing boards and in the skies above Europe towards the end of the war.

The officers who attended the Maury Island incident, Davidson and Brown belonged to G-2: It was G-2's responsibility to ensure Operation Paperclip was kept as a covert activity and provide the necessary security to achieve this. Another function of G-2 was the surveillance of anyone whose activities put Paperclip security at risk. That they were on their way to Wright-Patterson AFB with the objects Crisman had given them, was entirely logical - Wright Patterson (then Wright-Field) was the major research and development centre where many of the Nazi scientists had been taken to continue their work. One of the most prominent of the Paperclip physicians was Hubertus Strughold, later known as the 'father of space medicine' and after whom the Aeromedical Library at the USAF School of Aerospace medicine was named in 1977. His April 1947 intelligence report stated "[H]is successful career under Hitler would seem to indicate that he must be in full accord with Hitler." However he was admitted under Operation Paperclip on the grounds that he was "not an ardent Nazi." (13)

Other Nazis included Klaus Barbie, the so-called 'Butcher of Lyon', Otto von Bolschwing, infamous for his holocaust activities and the SS Colonel, Otto Skorzeny (14). However the cleansing of the files did not always stand up to the scrutiny of time. In 1984, Arthur Rudolph, who, in 1969 had been awarded NASA's Distinguished Service Award, left the country rather than face charges as a Nazi war criminal. Another former alleged Nazi was Wernher Von Braun. Born on 23rd March 1912, von Braun became one of the world's first and foremost rocket engineers and a leading authority on space travel.

Born the son of Prussian aristocrats Baron Magnus and Baroness Emmy von Braun, the young Wernher read Hermann Oberth's By Rocket into Planetary Space (De Rakete zu den Planetenaumen), and his new interest led him to later enrol at the Berlin Institute of Technology in 1930 (above, Oberth with Von Braun). In 1932 he received his bachelor's degree in mechanical engineering and he was then offered a grant to conduct and develop scientific investigations on liquid-fuelled rocket engines (15). Von Braun's rocket experiments were tested at the Kummersdorf Proving Grounds, sixty miles south of Berlin, between 1932 and 1937.