UFOs of the Third Reich 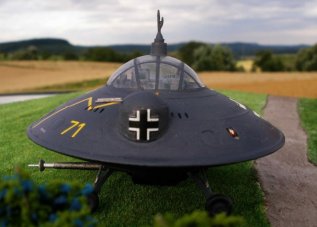 This appears to be the extent of information that can be verified to a degree. However there is much more that 'fits' within the known facts, but cannot be verified independently and therefore may well be fiction portrayed as fact. That said, much of the following information does flow with the themes explored further in the subsequent chapters of this book. Claims have also been made that Nazi Occult societies were involved in the development of such unconventional saucer craft. One such, the 'Vril Society' was allegedly 'channelling' messages from an alien civilisation in the Aldebaran solar system and planned to develop a craft that could make physical contact with the civilisation there. This may or may not be true; but there was certainly a high level of occult activity in mid-Europe at that time, and no doubt organisations did exist then with unconventional beliefs just as they do today.

Whatever the truth of this, by 1934 the Vril Society had apparently developed its first UFO shaped aircraft, known as the Vril 1 (above), which was allegedly propelled by an anti-gravity effect. (This was the same year as Viktor Schauberger discussed his flying disk ideas with Hitler.) The society then allegedly went on to develop this craft, and later - and again allegedly - produced the RFC-2. This craft was apparently 16 feet long and fitted with an improved propulsion system and for the first time, magnetic impulse steering. Interestingly, when in flight, it reportedly produced colour effects normally associated with UFOs. Yet the RFC-2 was largely ignored with only the SS showing an interest in the Vril Society's work. An inner organisation of the SS then set up its own SSE-4 department to develop new alternative technologies to ensure Germany no longer had to be dependent on external sources of energy and it began work on its own version of the RFC or Vril.

By 1939 the SS had produced the RFC-5, which it called the Haunebu 1. In August 1939 the machine made its maiden flight and proved its viability, being more than 65 foot in diameter and offering considerable storage space. By the end of 1940 the RFC-2 (Haunebu II, below) had entered service as a reconnaissance aircraft and there is certainly photographic evidence to support this, for example an RFC-2 was photographed near Antarctica in 1940 (see next chapter.) It should be noted that there is scant corroborative and historically verifiable information to support these claims, however the design of the Haunebu II should be noted for future reference. 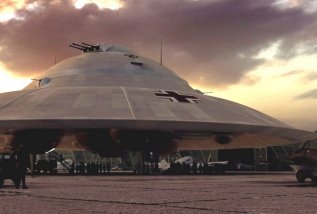 Whatever their exact nature, it appears confirmed that a range of alternative design aircraft were by now either on the drawing board, hovering above the ground, or crashing into it. Some of these designs proved viable and successes were being reported. On 17th April 1945 Miethe was able to advise Hitler that the V-7 had been tested in the skies above the Baltic. This particular craft was a supersonic helicopter fitted with 12 BMW Turbo aggregate engines. During its first test it reached an altitude of 78000feet and then 80000 feet on its second test. Miethe reported that the new craft could be powered by unconventional energy sources in principle. However these new technologies were coming online too late, for the war was already being lost and won. Within months the Allies and Russians had poured into central Europe, Hitler was dead and the war apparently over. And as soon as the war was over, ghost rockets started appearing over Scandinavia and within two years 'flying saucers' were being reported wholesale over mainland United States. It was no co-incidence.

After the end of the war in 1945, Russian and American intelligence teams began a hunt to track down this perceived military and scientific booty of the advanced German technology. Following the discovery of particle/laser beam weaponry in German military bases, the US War Department decided that the US must not only control this technology, but also the scientists who had helped develop it "to ensure that [America] takes full advantage of those significant developments which are deemed vital to our national security." It therefore launched a project to bring these personnel to the United States. Whilst initially publicised the nature, extent and secrecy of the project, later termed Operation Paperclip remained classified until 1973.

The thinking behind Paperclip was exemplified in a letter Major General Hugh Knerr, Deputy Commanding General for Administration of US Strategic Forces in Europe, wrote to Lieutenant General Carl Spatz in March 1945: "Occupation of German scientific and industrial establishments has revealed the fact that we have been alarmingly backward in many fields of research, if we do not take this opportunity to seize apparatus and the brains that developed it and put this combination back to work promptly, we will remain several years behind while we attempt to cover a field already exploited."

There was however, one slight problem: It was illegal, for US law explicitly prohibited Nazi officials from immigrating to America, and as many as three-quarters of the scientists in question were allegedly committed Nazis. (Indeed as at least 1600 scientists and their dependants were taken to America under Operation Paperclip and its successor projects, it could hardly avoid including Nazis.) However President Truman decided that the national interest was paramount and that America needed the German scientists to work on America's behalf. In fairness to Truman, he expressly ordered that anyone found to "have been a member of the Nazi party and more than a nominal participant in its activities, or an active supporter of Nazism or militarism" must be excluded from the operation.