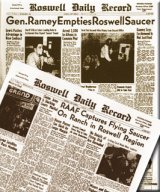 Arnold's account augured a flurry of similar reports - in fact eight hundred and fifty similar sightings were reported to the US Authorities between June and July of 1947 alone. Arnold later published details of his experience and the term 'flying saucer' entered the public domain following a newspaper interview he gave shortly after his experience. Of course at the time, the immediate governmental response wasn't that there was an alien presence in the sky, but that more Earthly enemies had developed technologies that could pose a threat to the United States. Then in July of that year, 1947, an event occurred that decades later is still a matter of intense speculation and controversy; an event that had fed decades of allegations of conspiracies, cover-ups, suppressed information and dissemination of disinformation. Hardly surprising, perhaps, when the event triggered a headline 'RAAF Captures Flying Saucer On Ranch in Roswell Region (above) and was authorised by the American Airforce itself.

The report that generated this headline was released by Walter Haut, the Public Information Officer at the Roswell Army Airforce Base and was based on events that occurred during a violent thunderstorm during the first week of July 1947. During that storm something crashed on the J. B. Foster Ranch, some 75 miles north-west of Roswell. The following morning, ranch manager William Brazel discovered fragments of unusual debris scattered over the ranch. In no great hurry, Brazel waited a few days before driving in to Roswell where he advised Sheriff George Wilcox of the find. Wilcox duly informed the Roswell Army Air Field, home of the 509th Bomb Group, the world's first atomic bomb unit (6) and Brazel then spent the whole of 8th July 1947 at Roswell Army Air Field before being given a military escort to the offices of the Roswell daily Herald where he refuted the crashed saucer story, merely describing a small volume of debris of no more than five pounds in weight. 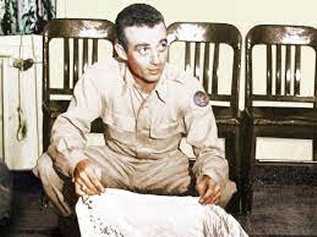 Major Jesse Marcel (above), the unit's Intelligence Officer, together with Captain Sheridan Cavitt, a Counter Intelligence Corps officer, accompanied Brazel back to the site. Marcel stated in a 1979 interview "we found some ... small bits of metal, but mostly we found some material that's hard to describe. I'd never seen anything like that, and I still don't know what it was ... I lit a cigarette lighter to some of this stuff, and it didn't burn." There were also "small, solid members that you could not bend or break, but it didn't look like metal. It looked more like wood. They varied in size ... perhaps three-eighths of an inch by one quarter of an inch thick. None of them were very long." Marcel also stated that he had seen unusual two-colour 'hieroglyphics' on some of the pieces as well as parchment like material (7). The area surrounding the crash was sealed off and all the remaining debris was collected and removed by the military.

>William Haut, the press officer stated in an interview with Timothy Good that he "had a call from Colonel Blanchard [Commander of the 509th Bomb Group], and he told me to report to his office ... He gave me the basic facts that he wanted to put in a news release ... that we had in our possession a flying saucer. A rancher had brought parts of it in to the Sheriff's office, and the material was flown to General Ramey, who was Commanding General of the Eight Air Force" (8). Marcel was then ordered to load the debris onto available aircraft and fly it Fort Bliss before it was moved to Wright Field (now Wright Patterson AFB) at Dayton, Ohio for examination. 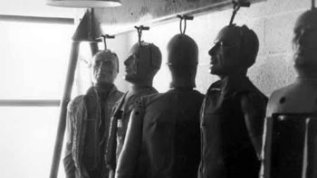 During an intermediate stop, Ramey took charge of the operation and those involved were sworn to secrecy. (In a 1991 sworn affidavit, General Thomas Dubose, who was then a colonel and General Ramsey's (of Roswell AFB) deputy claims that he and Ramey received orders directly from General McMullen in Washington to hide the real UFO debris and replace it with balloon debris.) Sure enough, within 24 hours, the original story of the 'Flying Saucer' was retracted and a somewhat uncomfortable looking Jesse Marcel was photographed posing alongside General Ramey with a piece of the 'debris' and announcing that the object was not a flying saucer after all but merely debris from a crashed weather balloon.

Whether it was a flying disk or not, we do now know that this account was untrue for the Air Force have recently retracted that particular story and replaced it with another one that no-one believes either. They now claim that the predecessor to the US Air Force, the US Army Air Forces recovered debris from an Army Air Forces balloon project code-named Project Mogul. As for the 'alien bodies' allegedly found at the crash site; these were apparently anthropomorphic test dummies that were taken up into the skies by US Air Force high altitude balloons for scientific research (above) (9).