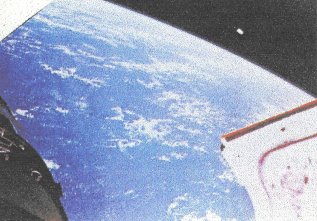 The Condon report stated: "There are three visual sightings made by the astronauts while in orbit which, in the judgement of the writer, have not been adequately explained. These are: 1. Gemini 4, astronaut McDivitt. Observation of a cylindrical object with a protuberance. 2. Gemini 4, astronaut McDivitt. Observation of a moving bright light at a higher level than the Gemini spacecraft. 3. Gemini 7, astronaut Borman saw what he described as a 'bogey' flying in formation with the spacecraft" (10). The Condon report later adds "The three unexplained sightings which have been gleaned from a mass of reports are a challenge to the analyst. Especially puzzling is the first one (Gemini IV)." (11) The Gemini VII (4th - 18th December 1965) incident referred to above is described in the following transmission between Capcom and the spacecraft:

Gemini VII: Gemini VII here. Houston, how do you read?

Capcom: Loud and clear. 7 go ahead.

Capcom: This is Houston. Say again 7.

Gemini VII: Said we have a bogey at 10 o'clock high.

Capcom: Gemini VII, is that a booster or is that an actual sighting?

Gemini VII: We have several, looks like debris up here. Actual sighting. (12) 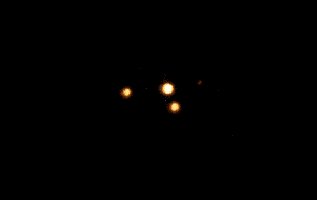 The Condon report makes the following observation on this sighting. "The general reconstruction of the sighting ... is that in addition to the booster travelling in an orbit similar to that of the spacecraft there was another bright object together with many illuminated objects. It might be conjectured that the bogey and particles were fragments from the launching of Gemini 7, but this is impossible if they were travelling in a polar orbit as they appeared to be doing." (13) The following transmission took place on the Gemini X mission (18th-21st July 1966) of 18th July 1966 when astronauts John Young and Mike Collins photographed a large cylindrical object:

Gemini X: This is 10, Houston. We have two bright objects up here in our orbital path. I don't think they are stars - they look like we are going right along with them.

Mission Control: Where are the objects from you?

Mission Control: If you can get us a bearing, maybe we can track them down.

Gemini X: To the east we have an extremely bright object. I believe it's too bright to be a planet. It's north of Orion about six or eight degrees. Right now it's approximately eight degrees. Is it Gemini VIII Agena? Over.

Gemini X: Picture that it makes just about an equilateral triangle with the belt stars in Orion and with Pleides. It's a...

Mission Control: Do you notice anything moving relative to the stars?

Gemini X: I haven't noticed any movements so far and unfortunately the stars are disappearing now and I can only see this object and one or two other first magnitude ... sun starting to come up." (14)

In the following Gemini XI mission between 12th - 15th September 1966, astronauts Pete Conrad and Richard Gordon described a cluster of objects next to their craft as 'large and very bright'. Two months later, Gemini XII (11th - 15th November 1966) photographed an object (top) on their second day out, however the NASA Photo Evaluation lab claims that this is actually rubbish that had been discarded from the spacecraft itself. If so, it is remarkably large and bright rubbish! This Gemini XII mission encountered other strange phenomena. Edwin 'Buzz' Aldrin photographed what appear to be three glowing orbs in space (above). In a three-minute period he took fifteen photographs showing the objects moving.

NASA, however, claimed that the objects or lights were merely reflections from the instrumentation lights on a nearby docking vehicle, however this is hardly plausible and somewhat discourteous to Aldrin's intelligence.