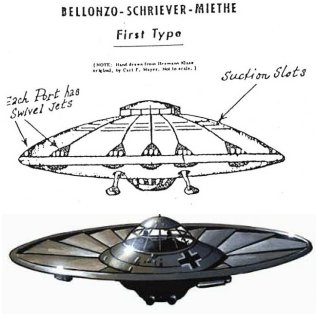 Schauberger was given a team of scientists to help him with his work, and he insisted that these be treated as free men rather than prisoners of the Nazis. During their work, however, their research headquarters was bombed and they were all transferred to Leonstein. There they perfected the 'flying disc' powered by Schauberger's turbine which rotated air into a twisting type of oscillation resulting in the build-up of immense power causing levitation. Schauberger's prototype was then developed into a vehicle known as the Belluzzo-Schriever-Miethe Diskus, a machine built up to 22ft in diameter. These craft travelled at over 2000 km/hr and were planned to go over 4,000 km/hr. By 1945 they could reach 1300 mph and gain an altitude of 40,000 feet in less than three minutes. The craft was also noted to glow blue-green as it rose and left a silvery glow. The Munich publication, Da Neue Zeitalter wrote in 1956 "Viktor Schauberger was the inventor and discoverer of the new motive power, implosion, which, with the use of only air and water, generated light, heat and motion." The publication reported that the first unmanned flying disc, what to an observer would have appeared to be Nazi UFOs, was tested in 1945 near Prague, that it could hover motionless in the air and could fly as fast backwards as forwards. It was also reported to have a diameter of 50 meters.

Other evidence in support of this event had appeared earlier in an interview given on 18th November 1954 to the Zurich-based Tages Anzeiger. One George Klein stated that he had witnessed Nazi UFOs flying saucer test on 14th February 1945 and that the craft had reached a height of 30,000 foot in three minutes and could travel at hundreds of miles an hour. In this interview, Klein gave further information regarding developments behind the disks, claiming that some of the work had taken place at Peenemunde, where the V-2 rocket was being developed and where Wernher von Braun was director. Klein also stated that the stability of the craft had been achieved by using a gyroscope; the same method used by the Von Braun-Dornberger team. The research then moved to the Mittlewerke underground facilities near Nordhausen in the Harz Mountains. 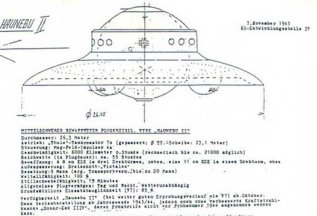 The 'Bible' of the story of the development of the Atomic bomb, Brighter than a Thousand Suns, also confirms these events: "The first of these flying saucers, as they were later called - circular in shape, with a diameter of some 45 yards - were built by the specialists Schriever, Habermohl and Miethe. They were first airborne on February 14th 1945, over Prague and reached in three minutes a height of nearly eight miles. They had a speed of 1250mph which was doubled in subsequent tests." (5)

That these events occurred is also supported by former CIA agent Virgil Armstrong who commented "We know that in the early parts of the war there were certain factions of the Allied forces that did not believe he had a secret weapon and it wasn't until the Americans made much emphasis of this that they began to look at it seriously and indeed did discover that Hitler not only had a secret weapon, he had what we would call today a UFO or spacecraft. He had one already off of the drawing board and flying and it was capable of 1200 miles an hour. Vertical take-off, 90 degree changes, much like a helicopter, and of course was far superior to anything the Allies powers had at that time. Secondly they knew he had another craft about to be up and going it was capable of doing 2500 miles per hours, which was double the original. Not only did it have the characteristics of the original craft, but it also had a laser weapon aboard it which capable of penetrating four inches of armour. Needless to say that really spooked the allied forces into making a redemptive attempt against him and bringing him ... into a state of capitulation." (6)

Bulgarian Physicist Vladimir Terziski also wrote the following about these Nazi UFOs. "According to Renato Vesco ... Germany was sharing a great deal of the advances in weaponry with their allies the Italians during the war. At the Fiat experimental facility at Lake La Garda, a facility that fittingly bore the name of Air Marshall Hermann Goering, the Italians were experimenting with numerous advanced weapons, rockets and airplanes, created in Germany. In a similar fashion, the Germans kept a close contact with the Japanese military establishment and were supplying it with many advanced weapons. I have discovered for example a photo of a copy of the manned version of the V-1 - the Reichenberg - produced in Japan by Mitsubishi. The best fighter in the world, the push-pull twin propeller Dornier-335 was duplicated at the Kawashima works."