Wernher von Braun was another German scientist who entered the USA under Operation paperclip at the end of the war. Von Braun was not a reluctant Nazi. Indeed, "he joined the National Socialist Aviation Corps, getting his pilot's license in 1933, the DAF trade organisation, a hunting organisation associated with the Nazis, the air raid protection investigation, and the SS horseback riding school" (19). Von Braun's own admissions in US Army records further show that he was a former SS Major who frequently visited the underground rocket factory where 25,000 prisoners from the concentration camp Dora had died. According to the former executive producer of CNN's investigative unit, Linda Hunt, von Braun attended a meeting that discussed rounding up of citizens off the streets of France to be taken to Dora.

As the war entered its dying throws in 1945, von Braun ordered two men to find an abandoned mine in the Harz Mountains to hide data about the V-2s. Several large boxes were then placed in a discovered cave and von Braun sent his younger brother Magnus off on a bicycle he had borrowed from a local innkeeper to look for Allies to whom they could surrender. Von Braun and his scientific staff duly surrendered to the US Army whilst most of the production engineers were taken prisoner by the Soviets (20). After entering America as part of Project Paperclip, on a pay of $6 a day plus lodging in a military installation, Braun worked on guided missiles for the US Army. He returned to Bavaria in 1948 to marry his second cousin and he later served as Technical Director then later Chief of the Guided Missile Development Division of Redstone Arsenal from 1950 to 1956 whilst living in Huntsville, Alabama (21). Von Braun was later appointed Director of Development Operations Division of the Army Missile Agency, which developed the Jupiter-C rocket that was to successfully launch the western's hemispheres first satellite, 'Explorer-I' on 31st January 1958, auguring the birth of the American Space Programme (22). 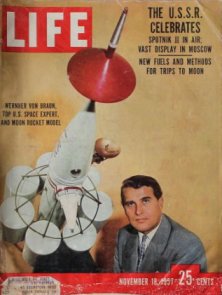 Two years later von Braun and his team were transferred to NASA's Marshall Space Flight Centre where he served as Director from July 1960 to February 1970. During the 1950s and 60s he achieved an almost celebrity status as one of Walt Disney's experts on the 'World of Tomorrow'. In 1970 he became NASA's associate administrator and without him, it is unlikely that the organisation would ever have put man on the Moon. Over a course of twenty years, von Braun received approximately 25 honorary degrees and he accepted many other awards and medals, presented to him from small cities, to NASA and even the President. His dossier was apparently rewritten so he didn't appear an enthusiastic (alleged) Nazi and he attempted to play down his real Nazi involvement by claiming "In 1939 [sic] I was officially demanded to join the National Socialist Party. At this time I was already Technical Director at Peenemunde ... The technical work had ... attracted attention at higher and higher levels. Thus, my refusal to join the party would have meant that I would have to abandon the work of my life. My membership in the party did not include any political activity (23)."

However, Von Braun's claim was simply untrue, for other scientists successfully used an old rule of the Weimar Republic that was still in use, forcing anyone in the military to abstain from political affiliation. Wernher von Braun's mentor, Hermann Oberth also entered the US after the war under Operation Paperclip. Born 25th June 1894 in the Transylvanian town of Hermannstadt, Oberth is widely recognised as the founding father of modern rocketry, having published the paper in 1923 that was to so inspire von Braun, Die Rakete zu den Planetenraumen (By Rocket into Planetary Space.) This was followed by a longer version (429 pages) in 1929 that was internationally regarded as a work of tremendous scientific importance.

When in his thirties, Oberth took Wernher von Braun (who affectionately referred to Oberth as his 'teacher') on as an assistant, and they worked together at Peenemunde developing the V2 rocket. After entering the US at the end of the war along with the remaining 100 V2 rockets and components, Oberth again worked with Von Braun as the entire Peenemunde team was re-assembled at the White Sands Proving Grounds. Oberth and Von Braun continued their work and it was a later development of the same V2 rocket which had inflicted so much damage on Northern Europe that was eventually to propel the first American into space in the Saturn V rocket. Oberth retired three years after entering the US and returned to Germany where he headed us the Oberth Commission for the German Government into the UFO phenomenon.

Another scientist who brought new knowledge to America was Viktor Schauberger. Although there is no evidence that Schauberger had Nazi sympathies, he was viewed by the Americans as a collaborator and put 'into protective custody' for six months at the end of the war. Dr Walter Miethe, and Rudolph Schriever also entered America under Operation Paperclip, however it is believed that their colleague Habermohl fell into Russian hands. Whilst in the US, Miethe continued his 'flying disk' work working primarily for the US Air Force, however he was sub-contracted to A. V. Roe and Company (A V Row prototype top).