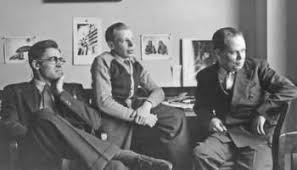 Dahl reported the incident to his 'boss', one Fred L. Crisman (above, centre), who at first did not believe his tale and reprimanded him for damaging the boat. The next day Dahl was apparently visited by a man wearing the not-yet-then stereotypical black suit and driving a brand-new 1947 Buick sedan. This man had breakfast with Dahl and advised him that "if he loved his family and didn't want anything to happen to his general welfare, he would not discuss his experience with anyone." But Dahl already had, and Crisman was later out checking Dahl's story by visiting the scene of the alleged incident. Crisman found the beach covered in slag, estimating nearly 20 tons of the material, and then, one of the strange donut shaped machines swooped out of the clouds towards him. Whatever else occurred, this event convinced Crisman that Dahl had been telling the truth after all. Crisman wrote to Ray Palmer, then editor of the science fiction magazine Amazing Stories with details of the incident. (Crisman had previously written to Palmer and had a letter published in the June 1946 issue detailing his encounters with his outlandish ideas of deros (detrimental robots) who ran an underground super-civilisation. Oh well ...

Palmer subsequently wrote to Kenneth Arnold (whose friend Colonel Paul Wieland had just returned from Germany as a judge at the Nuremberg trials) and asked him to investigate the story. He gave Arnold $200 to cover his expenses - no small amount in 1947. Indeed it was such a large amount that Arnold went on to boast about it at the office of the Idaho Daily Statesman whose editor, David Johnson, promptly sent a telegram to Air Force Intelligence to advise them of Arnold's pending investigation (12). (We now know that Johnson was habitually supplying information to the Air Force and other arms of government on a range of matters. His name also appears on the bottom of a document released in 1969 when the Air Force terminated Project Blue Book.) In the meantime, Dahl had had his photographs developed, but they were unusable with the film being fogged beyond all recognition.

Arnold flew to Tacoma on 29th July in his private plane and took a room at the Winthrop Hotel. He later phoned Dahl, but found him reluctant at first to meet and share details of his story, however he later agreed when Arnold advised him of his own current celebrity status. Dahl repeated his story and told Arnold that since incident he had had nothing but bad luck; family illness, engine trouble with his boat and loss of salvage income. 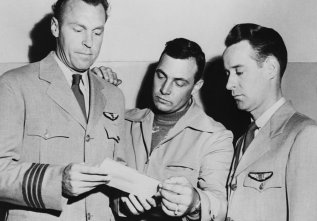 Arnold then contacted a friend of his, airline pilot Captain E. J. Smith (Arnold and Smith above) and asked him to come to Tacoma to contribute his expertise to the mystery. At 9:30am the following morning, both Dahl and Crisman turned up at Arnold's hotel claiming that someone had tried to destroy their boat. Apparently there had been an object in the sky circling above them an object unrecognisable to Crisman, despite being a former war pilot himself. Arnold then flew off to collect Captain Smith who, after interviewing both Dahl and Crisman, advised Arnold to contact Air Force A-2 (Intelligence) Officer Lieutenant Frank. M. Brown who was stationed at Hamilton Field, California.

Brown made plans to fly to Tacoma with another officer, Captain William Davidson and within an hour of Arnold's initial phone call, both officers were on their way to McChord Field, Washington in a B-25 bomber. (In the 1950s McChord Field itself was to play host to a number of strange aerial sightings. See Appendix II.) Shortly afterwards, United Press wire service reporter Ted Morello contacted Arnold to enquire why the Air Force were flying to Tacoma to see him. The significance here is that the media should not have known about Arnold's investigation. This became more perplexing as Arnold had already been receiving calls about his visit at the Winthrop Hotel even though only his wife, Smith, Dahl and Crisman apparently knew he was staying there. These calls were coming from the local newspaper stating they were receiving anonymous phone calls from someone who apparently knew everything that Arnold and Smith were involved in. Arnold began to wonder whether his room had been bugged, and if so by whom and why.

The two Airforce officers arrived at Arnold's hotel late in the afternoon of 31st July 1947, however Dahl failed to show at the arranged meeting, although Crisman did attend and talked at length about the incident. He showed Brown and Davidson some of the metal and slag he had collected and stated that he would return home to put together a box load of the debris for the officers to take back to California with them for analysis. The intelligence officers shared their doubts about the story with Arnold and prepared to leave at 11.30pm just as Crisman returned with the box full of fragments, which they put in the back of their military staff car. However the two Army Air Corps Officers involved, 1st Lt. Frank M. Brown and Capt. William L Davidson were killed when their B-25 carrying the photographs and some of the alleged UFO residue crashed within a few hours of their departure. The other crew and a passenger, an army enlisted man, bailed out and survived.

This man, Master Sergeant Elmer Taff, later told Arnold that he had witnessed Brown and Davidson load a large carton onto the plane and fifteen minutes into the flight the left engine had caught fire. The B-25 crashed near Kelso, Washington. The military cordoned off the site of the crash (FBI document dated 6th August 1947) and banned civilian aviation investigators near the wreck on the grounds that the plane had been carrying classified material at the time of the crash. Strangely the reporter who covered the story for the 'Tacoma Times', Paul Lance died in "... two weeks ... and the cause of his death was not clear ... he lay on a slab in the morgue for about thirty-six hours while the pathologists apparently hemmed and hawed (13).