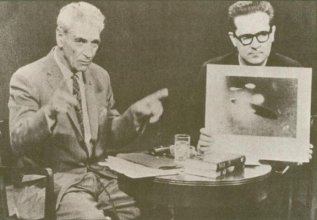 Just as Roswell has earned a place in UFO history, the name of George Adamski (above) has also become synonymous with the UFO phenomena. An uneducated Polish immigrant to the United States, Adamski claimed to have seen his first 'spacecraft' in 1946, and then a large fleet of them (around 184) in 1947. Then on 20th November 1952, according to Adamski, he and six friends were driving near Desert Centre, California, when they spotted a cigar shaped craft settling gently down on the ground about a mile from the road. Adamski approached the craft and was allegedly greeted by an alien with shoulder-length blond hair and wearing what appeared to be a ski-suit. What made Adamski's account seem plausible to many people was that his six travelling companions apparently witnessed the event. When Adamski detailed his experiences in a book entitled Flying Saucers Have Landed he ensured the work contained photographs of the witnesses' testimonies which had been signed before notaries public. They read "We, the undersigned, do solemnly state that we have read the account herein of the personal contact between George Adamski and a man from another world, brought here in his Flying Saucer "Scout Ship". And that we were a party to, and witnesses to the event as herein recounted."

Over the years Adamski claimed these alien contacts developed and he was taken on trips to Mars, Jupiter, Saturn and Venus. On one of these excursions Adamski claimed to have been shown the far side of the Moon where he gazed upon "cities, forests, lakes, snow capped mountains ... even people strolling around the sidewalks." When the Soviets released photographs of the far side of the Moon in 1959, Adamski merely claimed that the Soviets had retouched the prints "in order to deceive the United States." Conspiracy theorists make similar claims today regarding official photographs. Clearly Adamski had issues, yet there is a further intriguing element to his apparently wild story. He died on 23rd April 1965, at a time before his supporter's illusions were shattered by the introduction of cold facts, yet he gave the following account of his first so-called space flight in 1955, years before Yuri Gagarin became the first known human to travel in space on 12th April 1961. Adamski claims he was offered the chance to see what space really looked like from a spacecraft. He stated: "I soon forgot my disappointment as I looked out. I was amazed to see the background of space is totally dark. Yet there were manifestations taking place all around us, as though billions of fireflies were flicking everywhere, moving in all directions as fireflies do."

Compare these words with those used by astronaut John Glenn to describe elements of his flight on 20th February 1962. "The biggest surprise of the flight occurred at dawn ... when I glanced back through the window my initial reaction was that the spacecraft had tumbled and that I could see nothing but stars through the window. I realised, however, that I was still in the normal altitude. The spacecraft was surrounded by luminous particles. These particles were a light yellowish green colour. It was as if the spacecraft were moving through a field of fireflies." (10)

Whilst capturing the public imagination to some degree, the UFO phenomenon has never really been taken seriously - at least officially. It is often dismissed as a fascination of the 'lunatic fringe'. It is true that since the end of the Second World War the 'UFO circuit' has played host to information, disinformation, theory and counter theory, all against a supposed backdrop of alleged governmental conspiracy. Yet to 'throw the baby out with the bath water' is to miss out on an intriguing insight into what taking place on the world stage in the latter half of the Twentieth Century. 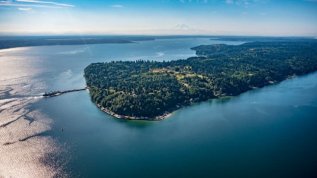 Events that are all richly featured in an incident that occurred on 21st June 1947, three days before Kenneth Arnold's 'sighting': An incident that occurred in Puget Sound harbour, between Tacoma and Seattle, Washington State, US (above). One Harold A Dahl, his teenage son Charles, two other crewmembers (and the family dog) had been patrolling for salvage logs when they saw "six huge donut shaped objects in the sky". The objects appeared to be about 100 feet in diameter and of a bright metallic appearance. Dahl ran his boat ashore on Maury Island (above) and started taking photographs of the objects. Five of the six objects were circulating around the sixth which appeared to be in trouble. Then there was an explosion and this sixth vessel fell Earthwards. The craft discharged a quantity of metallic residue before seemingly recovering and disappearing with the five other discs. Flakes of similar material to aluminium and some additional material (which resembled cooled lava) fell around the onlookers. Some fragments hit their boat causing damage, one fragment hit Dahl's son and another killed the family dog (16).

Dahl claims he tried to use his radio to call for help but when the objects were overhead the radio would not work. Dahl loaded his boat with some of the fallen debris and went back to Tacoma where his son was treated for burns. Tacoma itself had been the scene of a strange aerial sighting on 4th February 1908 when a multi-coloured light was observed by a conductor and many passengers of a train near Tacoma's Fifteenth Street. Later the same week, many multi-coloured shapes were seen in the sky above Washington State.