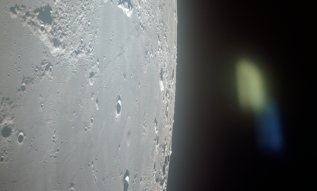 Astronaut Ken Mattingly also saw a light that flashed across the lunar sky before disappearing behind the horizon, however NASA believes that this light was in all probability just a micrometeorite. NASA scientist, Farouk El Baz, however, was not convinced the light seen by Mattingly was a micrometeorite. He stated in Saga magazine "The one thing I can't explain - that I do not know about or what it could be are those enormous flashes of light. There's no question about it, they are very tremendous things, not comets, not natural. Three were seen over the western part of the Moon, one by Ken Mattingly on Apollo 16, and two by Ron Evans and Harrison Schmitt on Apollo 17." (23)

Command Module: What are you learning?

Command Module: Where are your big anomalies? Can you summarise quickly?

Ground Control: Jack, we'll get that for you on the next pass.

Command Module: Hey, I can see a bright spot down there on the landing site where they must have blown off some of that halo stuff.

Command Module: Hey, it's grey now and the number one extends...

Ground Control: Roger. We got it. And we copy that's its all the way down there. Go to KILO KILO on that.

Command Module: Mode is going to HM. Recorder is off. Lose a little communication there, huh? Okay, there's Bravo, Bravo, select OMNI. Hey, you know, you'll never believe it. I'm right over the edge of the Orientale. I just looked down and saw the light flash again.

Command Module: Right at the end of the rille.

Command Module: That's on the east of the Orientale.

Ground Control: You don't suppose it could be a Vostock? [A Russian space probe.]

Where the flashing light came from has never been disclosed, if any answer was ever found. The idea that the flashing light could have been from a Vostock is bizarre. The Vostock was an obsolete Russian space probe that couldn't even reach the Moon, let alone perch on the edge of a crater flashing its lights. The flashing lights continued to be a mystery during this mission as this later transcript testifies:

Capcom: America, Houston. We'd like you to hold off switching to OMNI Charlie until we cue you on that.

Lunar Module: Was there any indication on the seismometers on that impact about the time I saw a light flash on the surface?

Lunar Module: A UFO perhaps, don't worry about it. I thought somebody was looking at it. It could have been one of the other flashes of light.

Lunar Module: I have the place marked.

Capcom:: Passed it onto the back room.

Lunar Module: Okay, I've got it marked on the map too.

Lunar Module: Just my luck. Just looking at the southern edge of Grimaldi, Bob, and that Graben is pre-Mare. Pre-Mare!

Capcom: Okay, I copy on that Jack. And as long as we're talking about Grimaldi, we'd like to have you brief Rob exactly on the location of that flashing light you saw ... We'll probably ask him to take a picture of it. Maybe during one of his solo periods (25).