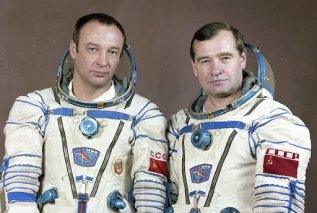 The Americans have made not all sightings on anomalies. The following was reported by cosmonauts from Salut 6 and Soyuz 9 during a mission when they orbited the Earth together between June and November 1978:

"Can you describe its shape?"

Russian journalist Leonid Lazarevich interviewed cosmonauts Manakov and Strekalov (above) on 28th September 1990 when they were aboard the space station Mir. The interview was published in Robochaya Tribuna and soviet youth magazines:

Lazarevich: Tell me, what are the most interesting natural phenomena you see on Earth?

Manakov: Yesterday, for example, I saw - if one may call it that - an unidentified flying object. I called it that.

Lazarevich: What was it?

Lazarevich: This was over the region of Newfoundland?

Manakov: No, we had already passed over Newfoundland. There was an absolutely clean, clear sky. It is difficult to determine, but the object was at great altitude over the earth - perhaps 20-30 kilometres. It was much larger than a huge ship.

Lazarevich: Could it have been an iceberg?

Manakov No. This object had a regular shape, but what is was I don't know. Perhaps an enormous, experimental sphere, or something else ... I was observing it for about six or seven seconds, then it disappeared.

Lazarevich: But is it possible to determine approximately its speed?

Manakov: It simply was hovering over the earth... 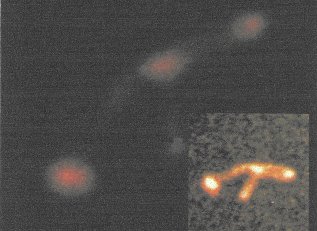 There have been many other reports of anomalous phenomena in space. In 1973 a photograph was taken by Owen K. Garriot from the American space station, Skylab (Skylab SL-3 28th July 1973 - 25th September 1973). The photograph showed an object (top ~ Inset: light enhanced version of this picture.) that rotated for several minutes before disappearing. Then on 6th January 1997, the Solar and Heliostropic Observatory (SOHO), a joint NASA/ESA satellite stationed in orbit 600,000 miles from Earth, is reported to have photographed a "very bright lozenge shaped object" above the sun. The photograph was subsequently published in Aviation Week and Space Technology. Neither NASA nor ESA have commented on it (28).

An insight into the nature of these strange objects may be gleaned from an episode that occurred on 15th September 1991, when the space shuttle Discovery was orbiting the Earth during NASA Mission STS-48. Whilst above Indonesia, one of Discovery's cameras filmed several anomalous objects. NASA examined the film and advised that the objects were in fact just ice particles, killing off the furry of interest that had been generated. However, the matter did not end there, for the film was later reviewed by Professor Jack Kasher of the University of Nebraska who came up with a startlingly different conclusion. Kasher's background was impressive, having actually worked for NASA and for the Star Wars Programme before becoming a Professor in Physics and Astronomy at the University of Nebraska. His research into the film led him to conclude that the ice particle theory was "a completely untenable position." He stated that, in his opinion, the objects observed on the film were manoeuvring in a manner compatible with being intelligently controlled (29).

Kasher based this conclusion on an analysis of the NASA footage frame by frame. He was able to demonstrate that the objects' positions, directions, speeds and capacity for acceleration were incompatible with NASA's ice-particle theory and he provided five 'proofs' to support his findings. (See Appendix 1). Having ruled out that the objects could be ice-particles, Kasher added, "we can [also] rule out more mundane things like comets, space junk and satellites. They just simply don't change direction like that, and that really leaves only one other possibility ... that these objects were spacecraft." (30) More insidiously, the original NASA footage appears to show a ground based missile firing at the objects.