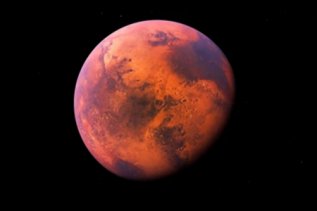 Mars has always held a special fascination for Mankind, perhaps because of its reddish hue, or the fact that of all the planets in our Solar System it has been viewed as our most likely neighbour to harbour life. Yet Mars is now a cold barren world, whose red colour comes from the dust which covers most of its surface. Mars is only one half the size of the Earth and is further from the Sun, having a year of 687 days each of which are only 41 minutes longer than those on Earth. Its surface gravity is 2/5ths that of Earth and its temperature ranges from 220 degrees C. max to -126 degrees C. min.

Controversy about the possibility of intelligent life on Mars was sparked in 1877 when the Italian astronomer, Giovanni Virginio Schiaparelli observed what he thought were straight canals on the planet's surface. His observations were 'confirmed' by the American astronomer Percival Lovel (1855-1916) who concluded that the markings were bands of vegetation bordering canals that had been constructed by intelligent beings to carry water from the Martian polar regions, where there was ice. However, by the 1950s, the theory had been dismissed, as more powerful telescopes revealed that the canals did not exist. 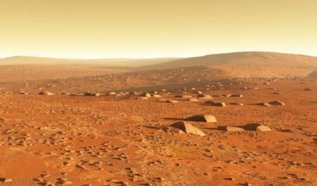 By that time, Orson Wells had transmitted his famous War of the Worlds radio play which was to have a profound effect on the American psyche, not least on the minds of the government who were made all too aware of the impact of the suggestion of hostile alien races. And then in 1997 came the dramatic announcement from NASA that life actually had been discovered on Mars and that this life had landed on Earth. The news made headlines in every paper throughout this country and the world. The story could have supported the science fiction appetite of legions who believed in life on Mars for the discovery could have led to an entire new chapter in human history had the alien life form discovered been somewhat different from that announced. 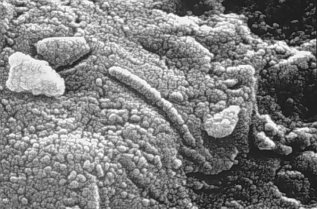 The aliens had landed on Earth's barren continent of Antarctica. Their method of travel brought them safely through Earth's atmosphere and onto the ice-beds that covered the frozen wasteland. Yet the aliens turned out to pose no threat to mankind, they couldn't even don a spacesuit let alone demand to be taken to anyone's leader, unless, possibly the leader was an amoeba who shared a basic common language. For the 'alien' life forms discovered were small fossils embedded in meteorites from the planet Mars that had crash landed on Antarctica at some point in our distant history. The meteorite containing the fossil is known to have originated from Mars from the measurement of gasses trapped in its interior as these gases match those that the spacecraft Viking measured in the Martian atmosphere. Some scientists, however, have dismissed NASA's claims that fossils actually came from Mars citing a more Earth based origin.

It was information from the earlier Viking spacecraft that had led the scientists to conclude that the meteorites - if not necessarily the fossils - came from Mars. This probe had undertaken a ten month, 440 million mile journey to the Red planet in 1976. Viking could not only orbit Mars but could even land on its surface, sending back striking images. In fact Viking took over 50,000 pictures of the surface and even now many of the frames taken have still to be viewed or analysed. 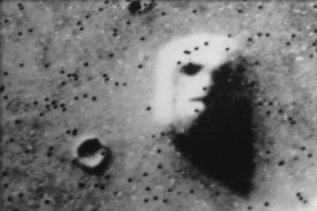 One particular frame taken on the Viking missions of the Cydonia Plateau, (frame 35A72) caught the eye of Dr Tobias Owen, later to become Professor of Astronomy at the University of Hawaii. The frame appeared to show a face on the planet's surface. This Face was approximately 1.6 miles in length, 1.2 miles wide and between 1650 and 2600 feet high. When enlarged, the full features of the alleged face seemingly became apparent. The image was then seized upon by numerous writers and researchers as irrefutable proof that some ancient civilisation lived upon, or visited Mars, at some time in prehistory leaving this incredible monument. It has even been claimed that the face on Mars is the Martian equivalent of the Sphinx, with similar pyramidal shapes adorning the nearby Cydonia plateau.

However, others have dismissed the image as 'pareidolia' - a type of illusion or misconception involving a vague stimulus being clearly perceived as something or someone. Astronomer Carl Sagan believes that the human tendency to see faces in clouds, tortillas, cinnamon buns etc is an evolutionary trait. "As soon as the infant can see, it recognises faces, and we know that this skill is hardwired in our brains. Those infants who a million years ago were unable to recognise a face smiled back less, were less likely to win the hearts of their parents, and less likely to prosper. These days, nearly every infant is quick to identify a human face, and to respond with a goony [sic] grin." (1)