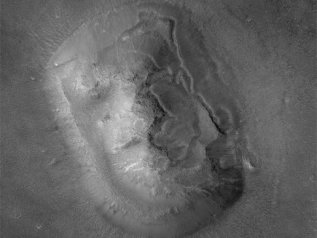 Sagan concluded that the explanation for the face is that it is the result of erosion, winds and other natural phenomena (2). NASA shared this view however after much public pressure eventually agreed to re-photograph the area on its next visit to the planet, however even this was tied up in controversy with claims that the organisation would deliberately miss any further opportunity or doctor new photographs of the area before releasing them into the public domain. History, it seems, was to prove NASA and Sagan right - even though the latter did not live see his views confirmed. NASA's Mars Global Surveyor arrived at the red planet in early 1998 and on 4th April of that year, the craft sent back the first detailed high resolution images of the 'Face' and surrounding terrain. The image appears to confirm that 'the face on Mars' is indeed the product of a trick of the light (below).

'Not so', cry researchers such as Richard Hoagland of the Enterprise Mission with its catchy slogan To Boldly Go Where Someone Has Gone Before. (If achieving nothing else, then perpetuating one of the most well-known split infinitives in the history of grammar.) Hoagland claims that NASA has deliberately tampered with the images, and has released them missing key data. Others have accepted that the image is disappointing and have turned their sights to other features of Cydonia that they claim are anomalous. In fact, there is no evidence left to suggest that any feature on Cydonia is anomalous, and now the new images are available, little credence can be placed on any claims made about an area photographed in the 1970s hundreds of miles above the planet's surface. There is, however, another anomaly on the planet's surface that has not yet been satisfactorily explained (below). This anomaly had been photographed on the Martian surface by Mariner 9. This feature, reported to be just under the surface of the planet, covers an area of 3.6 too 4.2 miles. (NASA Frame 75-H-604 - blow-up of this feature.) 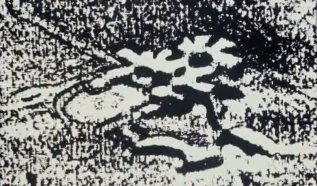 >NASA scientists claim that this unusual feature was caused by the melting and collapse of permafrost layers, others have commented that the structure looks more like a modern airport, and in any event, if taken by infrared would hardly be showing up melted ice. However exactly what the feature is, is purely a matter of speculation. Events surrounding the planet however are more intriguing. Mars has two moons, Deimos and Phobos. Deimos, the smaller moon measures just 8.7 miles across at its widest point. Its surface is a uniform grey-black and dark as coal. Deimos is about twice as dense as water and consists mainly of a type of rock that suggests it was once a meteor that was captured by the gravitational influence of Mars (3). Deimos was 'discovered' by the astronomer Asaph Hall in Washington in 1877 at the same time as Mar's larger moon, Phobos. This discovery is remarkable in itself, for telescopes in 1877 were no more advanced than previous telescopes and it is difficult to understand why they had not been seen previously, unless, of course, prior to 1877 they were not in orbit around Mars. Another explanation may be that Mars is closest to the Earth every 26 months, as it was in 1877. 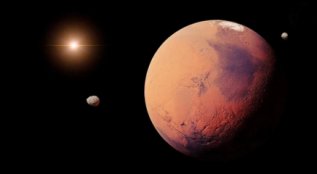 Phobos itself measures 16.7 by 13.6 by 11.8 miles across and is dominated by the groove like 'striations' emanating from the 6.2 mile wide crater Stickney which itself covers nearly 10% of the moon's surface area. Phobos has always been considered a rather mysterious object. Joseph Shklovskii, a noted member of the former Soviet Academy of Science and co-writer with Carl Sagan of Intelligent Life in the Universe once calculated the estimated density of the Martian atmosphere and the peculiar 'acceleration' of Phobos, and concluded that the satellite must be hollow. This finding, along with the belief that Phobos may only have entered the Martian orbit within the last few centuries, gained in significance following the strange events that surrounded the late 1980s Russian space mission to the two moons.