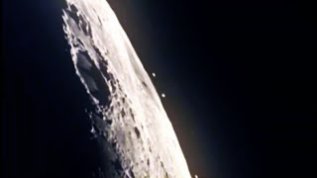 The Apollo programme that led to the first known human landings on the moon followed the Gemini missions. Astronauts Lovell, Anders and Borman (Apollo 8 - 21st-27th December 1968) read from the Bible as they made man's first recognised orbit of the Moon; "In the beginning God created the heavens and the Earth. And the Earth was without form and void, and darkness was upon the face of the deep..." Little were they expecting to see a "disc shaped object" swooping by them several times and a 'blinding light' glaring into their eyes. They also claimed they felt a "wave of internal heat within the space capsule" (15) and they estimated the size of the object to be about ten square miles. They also heard strange radio noises, which they described as either being "intolerably high frequency noises" or "weird garble" (16).

The next trip to the Moon was the Apollo 10 mission that took place between 18th - 26th May 1969. The task for astronauts Thomas P Stafford, John W Young and Eugene A Cernan, was to test the lunar landing vehicle in the skies above the moon's surface and duplicate every manoeuvre that the subsequent Apollo 11 would carry out, except the landing itself. They achieved lunar orbit on 22nd May 1969 and descended to within nine miles of the lunar surface. As they dropped down, an object suddenly rose vertically from directly below them. 16mm movie footage in addition to still photographs were taken of this event.

Apollo 11 (16th - 24th July 1969) was destined to finally end the initial objective of the space race; to land man on the Moon's surface. Neil Armstrong, Michael Collins and Edwin 'Buzz' Aldrin were to carry the honour of this historic mission that blasted into space on 16th July 1969. Then, a day after leaving Earth, the crew spotted an unusual object between their ship and the Moon. At first they thought it was the Saturn V booster rocket; however after calling Houston for confirmation, they were advised that the booster was 6000 miles away. The technical debriefing held after the astronauts returned home gives further details of this sighting:

Aldrin: The first unusual thing that we saw I guess, was one day out or something pretty close to the moon. It had a sizeable dimension to it, so we put the monocular on it.

Collins: How's we seen this thing? Did we just look out of the window and there it was?

Aldrin: Yes, and we weren't sure but what it might be the S-IVB. We called the ground and were told the S-IVB was 6000 miles away. We had a problem with the high gain about this time, didn't we?

Collins: There was something. We felt a bump or maybe I just imagined it.

Armstrong:: He was wondering whether the MESA had come off.

Collins:: I don't guess we felt anything.

Aldrin:: Of course, we were seeing all sorts of little objects going by at various dumps and then we happened to see this one brighter object going by.

We couldn't think of anything else it could be other than the S-IVB. We looked at it through the monocular and it seemed to have a bit of an L-shape to it.

Aldrin:: We were in PTC at the time so each of us had a chance to look at this and it certainly seemed to be within our vicinity and of a very sizeable dimension.

Aldrin: So then I got down in the LEM and started looking for it in the optics. We were grossly misled because with the sextant off focus what we saw appeared to be a cylinder.

Collins: No. It looked like a hollow cylinder to me. It didn't look like two connected rings. You could see this thing tumbling and, when it came round end on, you could look right down its guts. It was a hollow cylinder. But then you could change the focus on the sextant and it would be replaced by this open book shape. It was really weird.

Aldrin: I guess there's not much more to say about it other than it wasn't a cylinder.

Collins: It was during this period when we thought it was a cylinder that we enquired about the S-IVB and we'd almost convinced ourselves that's what it had to be. But we don't really have a conclusion as to what it might have been, how big it was, or how far away it was. It was something that wasn't part of the urine dump, we're pretty sure of that. (17)

It will be noted that Aldrin commenced the interview by referring to the "first unusual thing that we saw". And sure enough, there was more to come.