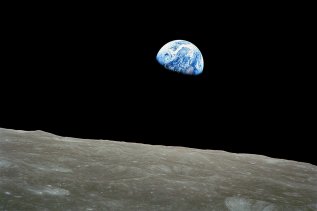 As Apollo 11 approached the Moon, the astronauts, like their predecessors in Apollo 8, also began to hear strange noises, which interfered with the space communication hook-up. Mission control even asked "Are you sure you don't have anybody else up there with you?" Then the astronauts witnessed circular objects streaking across the surface of the Moon the day before Armstrong was to place man's foot on the Moon for the first time. The same objects were later captured on film by astronauts of the Apollo 12 mission (below). These circular objects proved to be just one of a number of anomalous features captured on film around the lunar surface. Other examples include a large object seen hovering in orbit over the Moon.

Then, at 10:56pm (Florida time) on Sunday 20th July 1969, Neil Armstrong set foot on the surface of the Moon with the historic words "that's one small step for man, one giant leap for mankind." Shortly after being joined on the surface by Aldrin, they unveiled a plaque inscribed with the words Here men from the planet earth first set foot on the Moon, July 1969 AD. We came in peace for all mankind. Little were they to realise what was to happen next. However this is detailed in the next chapter. Apollo 12, with astronauts Charles "Pete" Conrad, Richard F Gordon Jr. (known as Dick) and Alan L Bean, started its journey to the Moon on 14th November 1969, returning ten days later complete with parts of the old Surveyor 3 probe which it met up with in space (as you do). Up to this mission, Apollo crews had comprised a mixture of astronauts with civilian, airforce or even civilian backgrounds. However Apollo 12 was strictly a Naval affair, the military agency that had allegedly captured a UFO during the war and been at the forefront of the technological battle since that time and the agency that had invaded Antarctica 'after' the war had ended to root out "flying objects which could fly from pole to pole at incredible speeds." As the Apollo 12 journey got underway, observatories from all over Europe began reporting that they had sighted two bright flashing unknown objects in the spacecraft's vicinity, and that these objects could even be sighted through large telescopes. One of the objects appeared to be following Apollo 12, the other in front of it.

The day following their launch, and 132,000 miles into their mission, the astronauts reported to mission control: "We have had an object which is in the same place all the time and appears to be tumbling. We have had it with us ever since yesterday and it just seems to be tagging along with us ... Its usually out our centre hatch window when our roll angle is about 35 ... maybe that will give you a clue and somebody can figure out ... what we are really looking at." (18). No solution was forthcoming, and the journey to the Moon continued. The Apollo 12 - Mission Control discussed the sighting further:

Apollo 12: OK. I wonder what that could be then?

Mission Control: OK. We'll go back to the drawing board.

Apollo 12 The object is very bright and it is obviously something that is tumbling. It is tumbling one and one-half revs per second or at least it is flashing us about that. Dick is going to tell you what star it is nearing.

Later in the same conversation:

Mission Control: ... it's kind of tough to say just what the heck that could be.

As the mission continued, strange noises were picked up and recorded in the log:

Alan Bean: Do you hear a lot of background noises Pete?

Dick Gordon: (Ten minutes later) Hey, Houston, do you hear this constant beep in the background?

Mission Control: That's affirmative. We've heard it now for about the past 45 minutes.

No cause for the noise was ever publicly released, if indeed it ever became known.