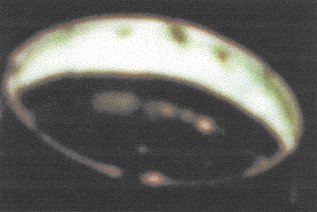 Another object was photographed from the command module of Apollo 12, the Yankee Clipper. On the original NASA print the object is very small, however, an enlargement (above) highlights what appear to be control panels and lights. NASA has refused to pass comment on the photograph. On their return to Earth, the following transmission was made in respect of a bright red object flashing below them over India:

Apollo 12: Also right in the centre of the Earth, now we have some real bright light shining, staying on that, Dick is looking at it with binoculars. It's real bright.

Mission Control: Roger. Understand. Does it appear to be coming from your nadir point, which should be just off the eastern coast now?

Apollo 12: Yes. It looks like its coming just about out of the centre of what we're looking at. I would say down from Burma and east of India.

Apollo 12: I can't imagine what this is.

Mission Control: We can't either. We're checking the possibilities.

Apollo 12: (As checks were being carried out.) It's a steady light and it appears in size to be as big as any of the thunderstorms flashing.

Apollo 12: It's hard to tell if it is exactly in the centre of the Earth or not. It's pretty close to being right in the centre. Maybe just a little bit to our right - whatever that means. Just a little to the side that the Sun did not go behind the Earth on." (21) 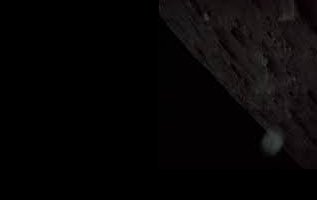 Yet again, the space programme had encountered something it could not explain; this time something as large as a thunderstorm flashing up at the spacecraft from lower down in the Earth's atmosphere. Again, no solution has ever been publicly forthcoming. Apollo 13 also joined the ranks of the missions that encountered strange phenomenon. This mission is best remembered for the near disaster that befell it and the crew's enduring limp home, however it should also be remembered for anomalous phenomena it photographed before the oxygen tank explosion such as NASA catalogue number 13-60-8609 (above), which appears to show an object over the lunar surface.

Apollo 14 (31st January - 9th February 1971) continued the tradition of photographing anomalous objects in space with this object seen manoeuvring over a crater on the surface. Apollo 15 (26th July - 7th August 1971) continued the intrigue in the summer of 1971 as astronauts David R. Scott, James B. Irwin and Alfred M. Worden landed the lunar module Falcon at the Hadley-Apennine site:

Capcom: You talked about something mysterious ...

Apollo 15: Okay, Gordy, when we pitched around, I'd like to tell you about something we saw around the LM [Lunar Module]. When we were coming about 30 or 40 feet out, there were a lot of objects - white things - flying by. It looked like they were being propelled or ejected, but I'm not convinced or that. 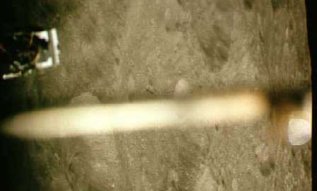 Apollo 15 is also credited with taking a sequence of photographs of blue objects that appeared to hover and change shape over the Moon's surface. Of course many of these photographs do only show what appear to be lights rather than physical objects (Although this does not mean the lights are not physical.) Apollo 16 (16th - 27th April 1972) continued the theme of strange sightings and this time with this intriguing NASA photograph AS16-19238 (above), which appears to show a huge cigar-shaped object between the camera and the Moon.