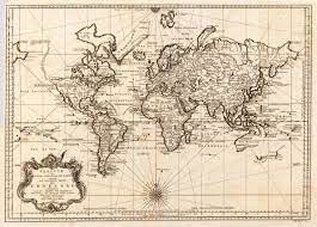 The world as known to our ancient ancestors was made up of the Americas, Europe, Africa and Asia and then made complete with the 'discovery' by the west of Australasia. Yet the planet had a hidden continent, one that was only 'revealed' as recently as 1820. Indeed some maps before that time show no record of the continent even existing, merely leaving a space where the frozen landmass should have appeared (above). According to legend, the Maori made the first sighting of the icebound southern ocean. However the first confirmed crossing of the Antarctic circle is credited to the British Captain, James Cook (1728-1779) in 1773 and it was to be a further forty-seven years before modern man first set eyes on mainland Antarctica during the Russian, British and United States expeditions of 1820. 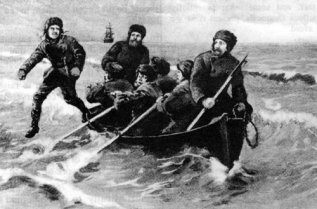 These explorers 'discovered' a land that was bigger in area than either Europe or the United States and Mexico combined, but an inhospitable land, with an ice cap measuring 13,000ft thick in places and covering 96% of the continent's surface. It was to be a further seventy-five years before the first confirmed landing on Antarctic mainland on 24th January 1895, a landing that led to an argument over who was first ashore. In the sketch above Borchgrevink depicts himself as making the first landing, much to the apparent dismay of others in the boat.

Such bleak conditions, together with months of darkness make for a land where it is impossible for land mammals to survive, although whales and seals populate the surrounding seas, feeding off the masses of 'krill' there. Porpoises and dolphins are also attracted to the icy waters by the abundance of fish in the area, predominately Antarctic perches. This complete absence of predatory land mammals on Antarctica has proved to be a great attraction for birds, with Emperor penguins, Antarctic petrels and South Polar skuas breeding there and nowhere else. Contrary to popular perception, snowfall is rare on the continent except at the coast, however blizzards are frequent, as loose snow is whipped up by winds at the margins of the ice cap. In all, these hostile conditions make for a barren, frozen wasteland where 'cold nightless summers, fade into colder sunless winters (1). Yet, as noted in the first chapter, it has been claimed that some people in our prehistory not only knew of this land but had even apparently mapped it before it became embedded in ice. These claims dominate many current 'alternative history' books such as Graham Hancock's Fingerprints of the Gods, Colin Wilson's From Atlantis to the Sphinx and Rand and Rose Flem-Ath's When the Sky Fell amongst others. These authors draw the conclusion that Antarctica could possibly be the location of the lost people and/or the location of the lost Atlantis. 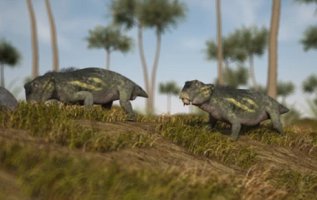 Clearly, Antarctica as it appears today could not support any civilisation; the cold and barren conditions would soon destroy any colony. Yet the popular conception of Antarctica as a continent that has been buried deep in ice for an eternity is flawed. Whilst certainly true that parts of Antarctica have been buried under ice for millennia, there is much evidence to suggest that before the Pleistocene era (c. 8,000-2m yrs BC), parts of the continent were once warm and ice free (2). There is certainly evidence in the early years of this planet, during the Cambrian era, (480m - 590m years ago) of "a moderately warm sea stretching nearly or right across Antarctica, in the form of thick limestones very rich in reef building Archaeocyathide" (3) and the Ohio Range Mountains in Antarctica contain rocks rich in fossils from 390 million years ago.

Fossil bones of a land reptile, Lystrosaurus (above), which lived in Antarctica about 200 million years ago, have been found in sandstones that were deposited by ancient rivers (4) and fossilised remains of ancient ferns such as Dicroidium from the same period have also been discovered. In March 1968 the National Science Foundation of the United States announced the discovery of a jawbone of a long extinct amphibian found in the mountainous central Antarctic region around 525km from the South Pole. 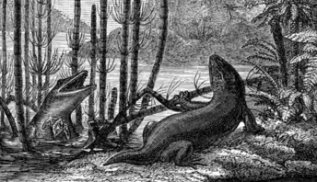 This bone was part of the skeleton of a Labyrinthodont (above); a creature that lived in the river valleys of Gondwana and in the rift valley between Australia and Antarctica until it died out some 110 million years ago. This discovery was made by an expedition organised by Ohio University and led by geologist Peter J Barrett who noted "it is clear that an amphibian of this type could only have survived in a hot climate, or at least a warm one and that therefore the Antarctic must once have been absolutely free of ice." (7)

Dr Umbgrove, in his book The Pulse of the Earth, notes that the flora of Antarctica, England, North America and India had many plants in common during the Jurassic period (130m-180m years ago) (5) and there is also evidence that during this Jurassic period dinosaurs roamed the now ice-gripped continent. This was discovered during an expedition to the Antarctic undertaken in 1990-1991 by Augustana Professor Dr. William R Hammer and an accompanying field team. The team came across bones in the ice and on digging further, excavated Antarctica's first known dinosaur on Mt. Kirkpatrick, at an elevation of approximately 14,000 feet not far from the South Pole.