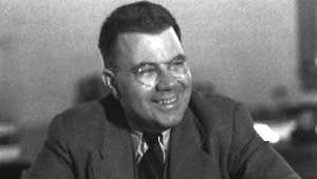 Condon was later to advise Sigma XI, an honorary scientific fraternity that he "recommended that the government get out of this [alien conspiracy] business ... there's nothing in it (55)." However, this unequivocal statement was not all it seemed, for Condon went on "But I'm not supposed to reach that conclusion for another year (56)." He had made the statement before the committee's work had even really begun. ON 20th February 1967, Condon, together with Dr. Richard Low, Dr. David Saunders, Dr. William Price and Dr Rachford visited the CIA's 'National Photographic Interpretation Centre' (NPIC) as part of their 'investigation'. The CIA were clearly rattled by the possibility of any exposure of their UFO activities as revealed in this CIA memo dated 23rd February 1967: "Any work performed by NPIC to assist Dr. Condon in his investigation will not be identified as work accomplished by the CIA. Dr. Condon was advised by Mr. Lundahl [NIPC Director] to make no reference to CIA in regard to his work effort. Dr. Condon stated that if he felt it necessary to obtain an official CIA comment he would make a separate distinct entry into CIA not related to contacts he has with NPIC (57)."

After the Condon Committee had concluded its work, Condon asked UFO researcher Dr. James Harder, what he would do if he were responsible for a project report that might conclude that UFOs really were a manifestation of extraterrestrial intelligence as many believed. Harder replied: "I said that I thought there would be other issues than the scientific ones, notably international repercussions and national security. He smiled the smile of a man who sees his own opinions reflected in the opinions of others and said that he had given the matter much thought, and had decided that if the answer was to be a positive finding of ETH [Extraterrestrial hypothesis], he would not make his finding, but would take the report, in his briefcase, to the President's Science Advisor, and have the decision made in Washington (58)." 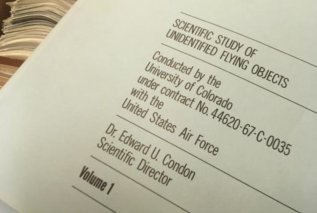 Whatever Condon privately believed, when the voluminous report was published in 1968, it concluded, "Our general conclusion is that nothing has come from the study of UFOs in the past 21 years that has added to scientific knowledge. Careful consideration of the record as it is available to us leads us to conclude that further extensive study of UFOs probably cannot be justified in the expectation that science will be advanced thereby (59)." This conclusion was on page one of the report and provided the soundbites for subsequent media coverage - after all, having read that unexciting conclusion, who would spend time ploughing through another 964 pages of alien conspiracy theories? The spin doctoring of the release of the report was award winning. It was released to the press on 8th January 1969 shortly before Richard Nixon's presidential inauguration, for release the following day. Faced with the almost impossible task of digesting the massive report overnight, reporters asked for a summary and were referred to the above conclusion. It was therefore this conclusion that hit the deadlines and headlines.

However, the report has become a work of controversy. Even during negotiations to establish the committee at the University of Colorado, Robert Low, an academic Dean who was to co-ordinate the project for the university, was expressing concern that the association between UFOs and the university might lay it open to ridicule. Indeed, the Universities of North Carolina, University of California and Harvard had all declined to undertake the study for this very reason. Low, however, had a proposal on how the university might take on the task but maintain respectability within the academic world. "The trick would be, I think, to describe the project so that to the public, it would appear a totally objective study, but to the scientific community, would present the image of a group of non-believers trying their best to be objective, but having an almost zero expectation of finding a saucer (60)."

Unfortunately for Low, this letter was found by a member of the Colorado Project, David Saunders, and published. He and another member of the group were subsequently fired. Saunders, however, exacted his revenge by publishing his own book entitled somewhat scathingly, UFOs? Yes! Where the Condon Committee Went Wrong. Saunders stated that Condon's conclusion and summary were not the findings of the committee but of Condon's own pre-existing beliefs. Saunders pointed out that the actual report concluded that a massive 30% of the ninety-one cases the Condon committee analysed remained unsolved. The objectivity of Condon and his study was under fire even before the official report was completed. On 29th July 1968 the US House Committee on Science and Astronautics held a symposium on UFOs. Congressman William Ryan, used the forum to launch an attack on Condon and he demanded a full investigation of the entire Colorado Project (61). Dr J. Allen Hynek and Dr. J. McDonald (the latter who, as noted above was later found dead in suspicious circumstances) also expressed their dissent of Condon, however these voices of dissent went unheard. On 17th December 1969, the then Secretary of the Air Force, Robert C. Seamans, Jr, announced that the Air Force was pulling out of the study of UFOs and that Project Blue Book was being terminated as it could no longer be justified "on the grounds of national security or in the interest of science (62)."

The US Air Force was finally officially out of the alien conspiracy theories business and no longer had to embarrass itself by explaining away both false and perhaps real UFO encounters. That there was some form of cover-up going on is supported by corroborative evidence from around the world. In England in 1989 the editor of the Heywood Advertiser revealed that following his investigations into a 1957 'sighting' in Wardle, Lancashire, his newspaper was effectively silenced. "We went into [the case] very thoroughly indeed and no matter what continued to report the pros and cons of the debate for several weeks. That all came to an end when the very top man from the Ministry of Defence called at our office personally, took us into a private back room and read the Official Secrets Act to us, with the warning to discontinue reporting further on that strange occurrence (63)." When asked at a public meeting in 1963 why the British Government was trying to 'hush up sightings of flying saucers' the former Minister of Defence, 1959-62), Harold Watkinson, replied "Before I left the ministry I had to sign a large number of papers promising never to reveal certain facts I had learned as Minister of Defence. The subject of flying saucers may be included (64)."