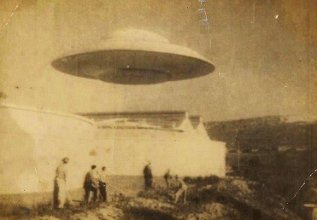 It seems likely, therefore, that many of the UFO sighting reports made after the war can be accounted for by misidentified or unrecognised German/US designs that were being developed in a secrecy necessitated by firstly the Cold War and secondly by the fact that most of the technologies were the result of works undertaken by former Nazi scientists secretly and often illegally brought into the US. For example, this craft (below), is the prototype of a giant 'flying saucer' designed to revolutionise air transport. Designed by British firm, Airship Industries, the Skyship was planned to cruise at about 100 miles an hour at an altitude of 5000 feet.

Yet this cannot account for all of the sightings, for it is inconceivable that the CIA, NSA, FBI etc. would have been in such a blind panic as described in previous chapters had the sightings simply been known terrestrial if unconventional aircraft. Each agency may not always have been aware of all developments at all times, but the official investigation into the UFO phenomena in the US went on officially for over twenty years, it would not be unrealistic to have expected a terrestrial explanation to have been circulated within that time frame. So if unconventional but terrestrial craft cannot account for many of the sightings - and the official interest - then what can. 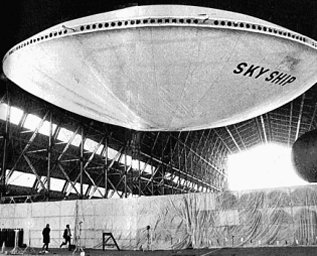 There have certainly been rumours circulating for many years that the German designs were actually man-made attempts to reproduce crashed real 'flying saucers' - attempts that failed because the engineers and scientists involved were unable to recreate the steering and propulsion systems of the alleged crashed craft. As bizarre as this sounds, this claim certainly better explains the number of sightings over hundreds if not thousands of years and the inability of the major governmental agencies to account for much of the activity in the skies after the war. And it is a claim that is backed by some major players on the world stage. One of the most impressive of those backing this claim is Colonel Philip J. Corso (Ret.) Corso published a book entitled The Day After Roswell: A Former Official Reveals the US Government's Shocking UFO Cover-up in which he makes a number of revelations. Corso's background itself is formidable. He was Chief of the US Army's Foreign Technology Division, and was a member of President Eisenhower's National Security Council. He later went on to work for Senator Strom Thurmond after retiring from the army in 1963. Corso was interviewed by Michael Lindemann of CNI News on 5th July 1997 and asked;

PC: Yes. True. I had German scientists on my team. I discussed this with them. I discussed this with Oberth, von Braun. I was part of 'Project Paperclip' with General Trudeau. There were crashes elsewhere, and they [the Germans] gathered material too. The Germans were working on it. They didn't solve the propulsion system. They did a lot of experiments on flying saucers. They had one that went up to 12,000 feet. But where all, we and they, missed out was on the guidance system. In R&D we began to realise that this being [a captured alien] was part of the guidance system, part of the apparatus himself, or itself, as it had no sexual organs."

In his book Corso also describes the UFO that crashed at Roswell and noted General Twinning's observations regarding the design; "The crescent-shaped craft looked so uncomfortably like the German Horten wings our flyers had seen at the end of the war that he had to suspect the Germans had bumped into something we didn't know about. And his conversations with Wernher von Braun and Willy Ley at Alamogordo in the days after the crash confirmed this. They didn't want to be thought of as verruckt but intimated that there was a deeper story about what the Germans had engineered." (25) Certainly this 'deeper story' was confirmed by the father of the modern rocket, Hermann Oberth. He independently confirmed that during the war years there was a Nazi-Extra-Terrestrial connection when he stated, "we cannot take credit for our record advancement in certain scientific fields alone. We have been helped." When asked by whom, he replied, "the peoples of other worlds." (26)

Wernher von Braun was equally frank about the issue and did not doubt that extraterrestrials were visiting the Earth nor that many of the advancements he was involved in were a result of back engineering alien technology. Indeed, he talked openly about the issue following an incident on 3rd June 1959 when the Discoverer III failed to achieve orbit, having been deflected whilst travelling. Von Braun commented, "We find ourselves faced by powers, which are far stronger than we had hitherto assumed, and whose base is at present unknown to us. More I cannot say at present. We are now engaged in entering into closer contact with those powers, and in six or nine months it may be possible to speak with some precision on the matter." (27) If these reports from Oberth and Von Braun are to be believed, then clearly the Germans held a knowledge not previously available to the Western allies. And it appears that the scientists entering the US after the war under the auspices of Operation Paperclip shared this knowledge with the US military who within weeks set in place one of the fastest but little known invasions of the Twentieth Century.

(23) DeVorkin, David H., Science With A Vengeance: How the Military Created the US Space Sciences After World War II p. 26, Springer-Verlag, New York 1992.