Armed with U.S. government security clearance, Smith watched, he says, as the 40-foot-wide elliptical craft hovered 10 feet off the ground and flew away, driven by twin propellers. A pilot lying in a cramped cockpit guided the craft. Smith, now a retired 72-year-old executive, recalled the experience during the UFO frenzy created by the 50th anniversary of the Roswell episode this month. Does he have proof that a craft like the one he saw crashed in Roswell during a test flight? No, but he says he believes that theory is more probable than visitors from outer space. At the time, Smith was a mechanical-engineering graduate just out of Penn State University. He was working for Chance-Vought Aircraft in Stratford, Conn., which was building planes for the U.S. Navy. Smith was testing the high-altitude bonding of a composite material: wood sandwiched between two layers of metal.

He says he was curious about what would be built with the material, and since he had security clearance, a supervisor led him into a guarded hangar. He was shown a new jet the company was developing, but his attention was attracted to the other craft in the hangar, a flying saucer made of the material he had been testing. "It was very streamlined," Smith recalls. The khaki-coloured saucer was a few inches thick at the edges to about two feet thick at the pilot's cockpit, which had a bubble window allowing the pilot to look forward and down at the ground. "I saw him get in, and he lay down flat," Smith says. The craft had two propellers and rudders in the back. Smith went back at night to watch test flights. The saucer, he says, would float straight up, then fly off.

"They'd get it off the ground and it would disappear" into the darkness, he says. He says there were reports in the area of unidentified flying objects. About the time he left Chance-Vought in 1947, it moved operations to Texas, where it would have better conditions for test flights, Smith says. (24) Thus, Chance-Vought moved to a state next to New Mexico the year of the Roswell crash. Other aircraft, at the time, seemed equally unconventional. In the 1930s and 1940s in Germany, the Horten brothers, Walter and Reimar, built a range of planes that they called the 'Ho' series (above). The first of this series, the Ho I, was a simple flying-wing sail plane.

By the end of that decade the brothers had developed the Ho III, a metal framed glider that was fitted with a folding blade propeller for flight. Then in 1944 they finished the prototype HO IX, their first combat intended design, powered by the Junkers Jumo 004B turbojets, the craft had a metal frame and plywood exterior. It made its maiden flight on 2nd February 1945 and satisfied with its performance, the Air Ministry ordered forty of the craft to be built by the Goetha Waggonfabrik under the designation Ho-229. 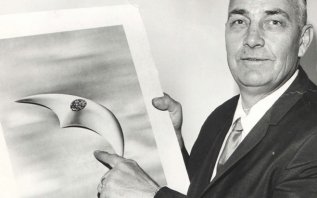 When the US Third US Army Corps reached the Goetha plant on 14th April 1945 they took over the factory, and shipped back to the US the near completed HO IX V3. Another similar looking craft was this 'airplane' photographed in Germany at the end of the war. In fact, many of these German designs seemingly account for many of the reports of Unidentified Flying Objects seen over the US after the war. Kenneth Arnold himself described what he saw as a flying disc, yet when Arnold actually drew a picture of what he had seen, it looked little like the popularly conceived silver-round disc that readily springs to mind. In fact, the diagram Kenneth Arnold actually drew of what he had seen that fateful day in 1947 looks remarkably like the German HO IX or other craft developed during the war (above).

George Adamski's UFOs (above) also have a similar Nazi connection and look remarkably like the drawings for the Nazi Haunebu II during the second world war. Notice the bubble effects under the diagram of the Nazi craft and those captured in the alleged Adamski UFO. Indeed, it obviously is the Haunebu craft. 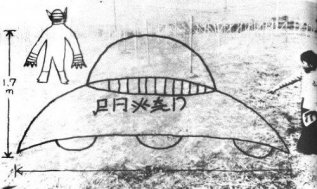 The last picture (above) was drawn following an alleged UFO touchdown near Kofu City, Yamanshi Prefecture in Japan on 23rd February 1975. According to the artist, an occupant came out of the craft and touched a child on the shoulder, temporarily paralysing him. (Well, wouldn't you be startled if an alien touched you?)