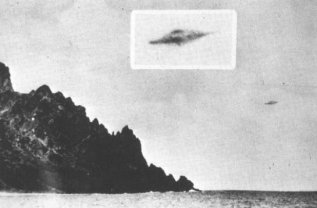 This experience was the subject of a later article entitled A Cigar-Shaped UFO over Antarctica. "At the beginning of January 1956, during a period of stormy weather, the party suddenly became aware of something which, in other circumstances, could have been very grave for them. This was that their radio had mysteriously ceased to function. This was not too worrying a disaster in so much as it was firmly settled that the helicopter would return to take them off again on January 20." One of the scientists, a doctor, was in the habit of getting up in the night to observe anything of meteorological interest, but another of the group, a professor, did not like to be disturbed. However on the night of 8th January 1956, the Doctor decided to wake the professor. He pointed upwards, almost overhead. Still in a bad temper through being disturbed, [the professor] looked as directed, and beheld two 'metallic' cigar-shaped objects in verticular positions, perfectly still and silent, and flashing vividly the reflected rays of the sun."

Soon after 7.00am, two other members of the party, an assistant and a medical orderly joined the two men. The group watched the two craft. At about 9.00am object No. 1 (the nearest to the zenith) suddenly assumed a horizontal posture and shot away like a flash towards the west. It had now lost its metallic brightness and had taken on the whole gamut of visible colours of the spectrum, from infrared to ultra-violet. Without slowing down it performed an incredible acute-angle change of direction, shot off across another section of the sky and then did another sharp turn as before. These vertiginous manoeuvres, the zig-zagging, abrupt stopping, instantaneous accelerating, went on for some time right overhead, the object always following tangential trajectories in respect to the Earth and all in the most absolute silence.

"The demonstration lasted about five minutes. Then the object returned and took up position beside its companion in almost the same area of the sky as before, but now it was the turn of No. 2 to show its paces and do a weird zigzagging dance. Shooting off towards the east, it performed a series of ten disappointed bursts of flight, broken by brusque changes of direction, and marked by the same colour changes when accelerating or stopping, and so on. After about three minutes of this, object No. 2 returned and took up its station near its companion, and reassumed its original solid and metallic appearance.

"The scientists had with them two Geiger-Miller counters of high sensitivity, one of the auditory and the other of the flash-type. When the two objects had finished their dance and reassumed their stations in the sky, someone discovered that the flash-type Geiger counter now showed that radioactivity around them had suddenly increased 40 times - enough to kill any organism subjected long enough to it. The discovery greatly increased the anxiety felt by the four men. Although they had no telescopic lens, they did however have cameras with them, and they took numerous photographs of the objects, both in colour and black and white. We are not told in the report what became of these photographs." (24).

Five years later there was another documented account of a UFO sighting over Antarctica by Rubens Junqueira Villela, a meteorologist and the first Brazilian scientist to participate in an expedition to the white continent, now a veteran of eleven expeditions to Antarctica (two with the US Navy, eight with the Brazilian Antarctic Programme and another on the sailing ship Rapa Nui). Whilst on board the US Navy icebreaker Glacier which had set sail from New Zealand at the end of January 1961, Villela claims that he witnessed a UFO event in the skies over Antarctica which he immediately recorded in his diary, even including the emotions felt by all those involved. During 16th March 1961 and after a fierce storm had forced the expedition to retreat to Admiralty Bay in the King George Isles, "a strange light suddenly crossed the sky, and everyone started to shout. 'It's a missile!' said one excited Marine. 'No, it's a meteor,' barked another member of the crew. The excitement was wide-spread and growing. Trying to describe the light which appeared over wasn't easy. I wrote in my diary: 'Positively the colours, the configuration and contours of the object, as a bodied [sic] light, with geometric forms, did not seem to be from this world, and I did not know what could possibly reproduce it.'

"The object was multi-coloured and had a luminous body oval-shaped. It left a long tube-like orange/red trail. Suddenly, it split into two pieces, as if it had exploded. Each part shone even more intensively, with white, blue and red colours projecting 'V' shaped rays behind it. Quite quickly they moved away and could be seen 200 meters above the ground. Throughout the sighting no noise was heard by any of the witnesses." The US Navy officially registered the incident as "a meteor or some other natural luminous phenomenon" according to the report submitted by the Glacier's captain, Captain Porter. As a trained meteorologist, Villela easily dismissed the official line. "How could they mistake a meteor with an object carrying antennae, completely symmetrical and followed by a tail without any sight of atmospheric disturbance?" (25). The renowned sceptic and self-styled debunker, Phillip Klaus, believes this episode is a classic example of 'plasma', however the late meteorologist, James McDonald argued that the highly structured nature of the object and the low cloud overcast present at about 1500 feet were not compatible with Klass's hypothesis.

The South Atlantic area was also host to another sighting on 16th January 1958 when the Brazilian naval vessel Almirante Salddanha was escorting a team of scientists to a weather station on Trindade Island. As the ship approached the island (or rather an outcrop of rock) a UFO reportedly swooped past the ship, circled the island, then flew off in front of dozens of witnesses. One of these witnesses, the expedition photographer, took a number of photographs of the object, and later the film was handed over to the military by the Captain. After analysis, the Brazilian government released the film stating that they were unable to account for the images. Whatever was going on in the Antarctic region, it certainly wasn't happening in isolation.