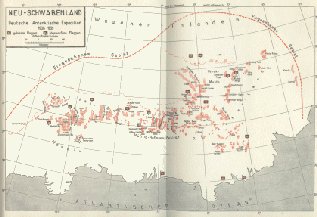 Although the activities of the German ship Erlangen, under the captaincy of Alfred Grams, do not appear to be of consequence during 1939-40, the same cannot be said of the Komet which was commanded by Captain Robert Eyssen. Following her passage along the Northern Sea Route in 1940, this commerce raider operated in the Pacific and Indian oceans, including a voyage along the Antarctic coastline from Cape Adare to the Shackleton Ice Shelf in search of whaling vessels during February 1941. There she met the Pinguin and supply vessels Alstertor and Adjutant. (Komet was also known as Hilfskreuzer 45 and was sunk off Cherbourg in 1942 (12).) The Pinguin itself under the command of Captain Ernst-Felix Kruder was a commerce raider that operated chiefly in the Indian Ocean. In January 1941 she captured a Norwegian whaling fleet (factory ships Ole Wegger and Pelagos, supply ship Solglimt and eleven whale catchers) in about 59 degrees S, 02 degrees 30W. One of these catchers (renamed Adjutant) remained as a tender and the rest were sent to France.

This ship also made anchorages at the Iles Kerguelen and may have landed a party on Marion Island. (Pinguin was sunk off the Persian Gulf by HMS Cornwall on 8th May 1941 after she had captured 136,550 tons of British and allied shipping. She was also known as Hilfskreuzer 33, and disguised herself at various times as Tamerlan, Petschura, Kassos and Trafalgar (13).) This island of Kerguelen (named the Most Useless Island In the World in 1995) continued to feature prominently in Nazi plans. For example, in 1942 the German Navy planned to establish a meteorological station there. In May of that year the ship Michel (Hilfskreuzer 28) transferred a meteorologist and two radio operators with full equipment to a supply vessel Charlotte Schlieman that went on to the island, however the orders for the station were later counter-manded (14). 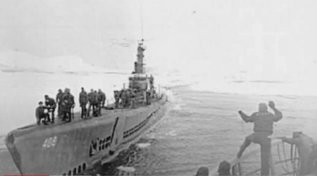 Kerguelen Island was also the centre of a mid 19th Century mystery. Then entirely uninhabited, except for seals and seabirds, British Captain Sir James Clark Ross landed there in May 1840. He found in the snow unidentifiable "traces ... of the singular footprints of a pony, or ass, being 3 inches in length and 2.5 inches in breadth, having a small deeper depression in either side, and shaped like a horseshoe." Similar markings appeared overnight in the Devon area of England fifteen years later and have also defied adequate explanation.) Then in 1942 Captain Gerlach in his ship the Stier investigated nearby Gough Island as a possible temporary base for raiders and a camp for prisoners. (Stier was also known as Hilfskreuzer 23.)

This ship activity does not appear considerable, however the level of U-boat activity in the South Atlantic was much higher. The exact nature and extent of how high will probably never be known, however some insight might be gleaned from the fact that between October 1942 and September 1944 16 German U-boats were sunk in the South Atlantic area (see Appendix I). Apart from their normal patrols, some of these submarines did appear to be engaged in covert activities. For example submarine U-859 which, on 4th April 1944 at 04.40hrs, left on a mission carrying 67 men and 33 tons of mercury sealed in glass bottles in watertight tin crates. The submarine was later sunk on 23rd September by a British submarine (HMS Trenchant) in the Straits of Malacca and although 47 of the crew died, 20 survived. Some 30 years later one of these survivors spoke openly about the cargo and divers later confirmed the story on rediscovering the mercury. The significance being that mercury is usable as a fuel source for certain types of aerospace propulsion. Why would a German submarine be transporting such a cargo so far from home? 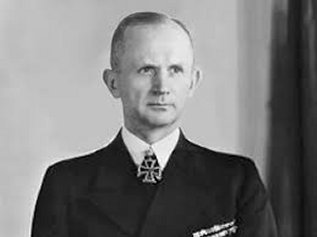 Although this is the known record of Nazi activity around Antarctica before 8th May 1945 when Germany surrendered unconditionally to the Allies, events after that date suggested something was happening that did not form a part of recognised world history. Something fuelled by a statement made by Karl Donitz (above). Donitz (16th September 1891 - 24th December 1980) had become Oberbefehlshaber der Kriegsmarine on 31st January 1943 and he led the German U-Boat fleet until the end of World War II. (Donitz also has the distinction of briefly becoming head of the German state for 20 days after Hitler's death until his own capture by the Allies on 23rd May 1945.) His contribution to the mystery of post-war Antarctic activity came in a statement he made in 1943 when he declared that the German submarine fleet had rebuilt "in another part of the world a Shangri-La land - an impregnable fortress." Could he have been referring to the alleged base in Antarctica? Certainly there are records of continued German naval activity in the area after the war had apparently ended. For example, on 10th July 1945, more than two months after the cessation of known hostilities, the German submarine U-530 surrendered to Argentine authorities.

The background to this event is puzzling. It is known that the boat had left Lorient in France on 22nd May 1944 under the captaincy of Otto Wermuth for operations in the Trinidad area, and after successfully rendezvousing with the incoming Japanese submarine I-52, it headed for Trinidad before finally returning to base after 133 days at sea. The boat's official record states that between October 1944 and May 1945 it formed part of the 33rd Flotilla and on Germany's surrender Otto Wermuth's captaincy and the submarine's career came to an end. Yet two months later it arrived in Rio de la Plata in Argentina and surrendered to the authorities there on 10th July 1945. (11).)