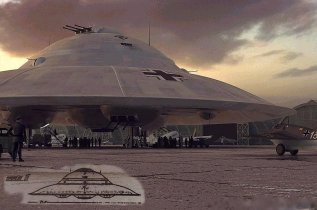 Yet again in Bender's drawing we see a drawing of his UFO with the three bubbles underneath, reminiscent of the Haunebu II (above) alongside a cigar shaped object. Ernst Zundel, a German scientist turned author who had entered the US under Operation Paperclip at the end of the war and who worked at Wright Field (later Wright Patterson AFB where the alleged Roswell debris was housed), also made claims about the nature of the activity in Antarctica. In the 1970s Zundel wrote a book 'UFOs: Nazi Secret Weapons?' in which he claimed that UFOs were secret Nazi weapons developed during the Second World War, and some of them had been shipped out towards the end of the war and hidden at the poles. Publication of the book coincided with a tidal wave of renewed interest in all things spiritual, and Zundel was invited on to countless talk shows to share his views on spaceships, free energies, electromagnetism, emergent technologies and some of the positive contributions made by the Germans under the Third Reich in these fields (26).

Zundel was actually only really interested in promoting his holocaust theory, described in his book 'Did Six Million Really Die?' however found that his Nazi and 'Hollow Earth' ideas proved a greater attraction to television producers. Zundel explains: "I realised that North Americans were not interested in being educated. They want to be entertained. The book was for fun. With a picture of the Fuhrer on the cover and flying saucers coming out of Antarctica it was a chance to get on radio and TV talk shows. For about 15 minutes of an hour program I'd talk about that esoteric stuff. Then I would start talking about all those Jewish scientists in concentration camps, working on these secret weapons. And that was my chance to talk about what I wanted to talk about." (27). The idea however, gripped the popular imagination and took on a life of its own. Zundel's publishing company, 'Samisdat', started to make a name for itself by issuing newsletters and books on the subject. An expedition to Antarctica itself was even proposed to seek out 'Hitler's UFO bases' there (below). 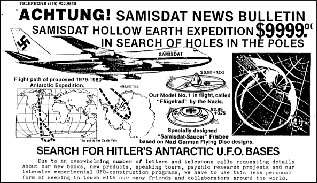 Yet such claims would have died out had they not been based on at least some real events. That something strange was happening around the foreboding continent took an interesting turn in the 1960s when the Argentine Navy was charged with the official investigation into strange sightings in the sky. A 1965 official report prepared by Captain Sanchez Moreno of the Naval Air Station Comandante Espora in Bahia Blanca stated: "Between 1950 and 1965, personnel of Argentina's Navy alone made 22 sightings of unidentified flying objects that were not airplanes, satellites, weather balloons or any type of known (aerial) vehicles. These 22 cases served as precedents for intensifying that investigation of the subject by the Navy (20)." Following a series of sightings at Argentine and Chilean meteorological stations on Deception Island, Antarctica, in June and July 1965, Captain Engineer Omar Pagani disclosed at a press conference that "the unidentified flying objects do exist. Their presence in Argentine airspace is proven. Their nature and origin are unknown and no judgement is made about them." (21)

More details of these UFO sightings were given in a report in the Brazilian newspaper 'O Estado de Sao Paulo' in its 8th July 1965 edition. "For the first time in history, an official communique has been published by a government about the flying saucers. It is a document from the Argentine Navy, based on the statements of a large number of Argentine, Chilean and British sailors stationed in the naval base in Antarctica. The communique declared that the personnel of Deception Island naval base saw, at nineteen hours forty minutes on 3 July, a flying object of lenticular shape, with a solid appearance and a colouring in which red and green prevailed and, for a few moments, yellow. The machine was flying in a zig-zag fashion, and in a generally western direction, but it changed course several times and changed speed, having an inclination of about forty-five degrees above the horizon. The craft also remained stationary for about twenty minutes at a height of approximately 5,000 meters, producing no sound.

The communique states moreover that the prevailing meteorological conditions when the phenomenon was observed can be considered excellent for the region in question and the time of year. The sky was clear and quite a lot of stars were visible. The Secretariat of the Argentine Navy also states in its communique that the occurrence was witnessed by scientists of the three naval bases and that the facts described by these people agree completely." (22)

In March 1950 Commodore Augusto Vars Orrego of the Chilean Navy shot still pictures and 8mm movie footage of a very large cigar shaped flying object that hovered over and manoeuvred about in the frigid skies above the Chilean Antarctic. Orrego stated "during the bright Antarctic night, we saw flying saucers, one above the other, turning at tremendous speeds. We have photographs to prove what we saw (23)." Then during January 1956 an event was witnessed by a group of Chilean scientists who had been flown by helicopter to Robertson Island in the Wendell Sea to study geology, fauna and other features.