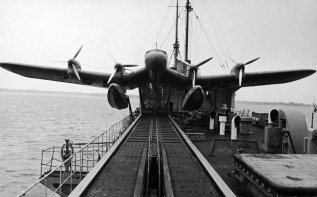 For the mission Ritscher was given the Schwabenland a German aircraft carrier that had been used for transatlantic mail deliveries by special flightboats, the famous 10 ton Dornier Super 'Wals' since 1934. These 'Wals' were launched by catapult from the Schwabenland and had to be accelerated to 93mph before they could become airborne. At the end of each flight a crane on the ship lifted the aircraft back on board after they landed in the sea.

The ship was refitted for the expedition in the shipyards of Hamburg, and around one million Reichmark - nearly a third of the entire expedition budget - was spent on this refit alone. The crew was prepared for the mission by the German Society of Polar Research and as these preparations neared completion, the organisation invited Admiral Byrd to address them, which he did. 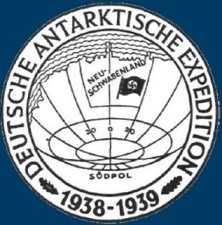 The Schwabenland (above) left the port of Hamburg on 17th December 1938 and followed a precisely planned and determined route towards the southern continent. In little over a month the ship arrived at the ice covered Antarctica, dropping anchor on January 20th 1939 (8). The expedition then spent three weeks off Princess Astrid Coast and Princess Martha Coast off Queen Maud Land (9). During these weeks, the two Schwabenland aircraft, the Passat and Boreas, flew 15 missions across some 600,000 square kilometres of Antarctica, taking more than 11,000 pictures of the area with their specially designed Zeiss Reihenmess-bildkameras RMK 38.

These pictures showed that some of the older Norwegian maps of the area from 1931 were not only inaccurate, but occasionally fabricated, as the original 'maps' bore no resemblance to the photographic images now obtained. (In fact the Norwegian expeditions that had prepared these earlier maps had never actually gone as far inland as some of the areas detailed on their maps.) Nearly one fifth of Antarctica was reconnoitred in this way and, for the first time, ice-free areas with lakes and signs of vegetation were discovered. This area was then declared to be under the control of the German expedition, renamed Neu-Schwabenland and hundreds of small stakes, carrying the swastika, were dumped on the snow-covered ground from the 'Wals' to signal the new ownership. Ritscher and the Schwabenland left their newly claimed territory in the middle of February 1939 and returned to Hamburg two months later, complete with photographs and maps of the new German acquisition. 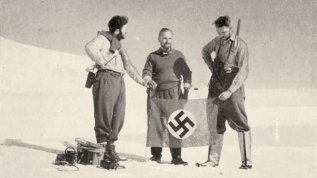 The true purpose of this expedition has never been satisfactorily explained; we are merely left with a series of puzzles, related reports and snippets of information that are no longer open to verification. What is not open to doubt however, is that in the decade preceding the Second World War, the Germans did almost nothing that did not put the entire structure of the country on a war footing. This activity affected all aspects of German life; military, civilian, economic, social and foreign policies, engineering, industry etc. Given that the seizing of NeuSchwabenland occurred on the very eve of the war, it can only be concluded that that the polar expedition was of major importance and significance to the goals and development of the planned 1000-year Third Reich. And this 'invasion' was certainly not the end to German activity in the area; rather the prelude, providing support for the idea that Germany might have established a base on the apparently frozen wasteland.

That German activity continued around Antarctica through the war years is a matter of historical record. In 1939, the ship Schleswig-Holstein is reported to have inspected Iles Kerguelen, Ile Saint-Paul, Ile Amsterdam, Iles Crozet, Prince Edward Islands, and Gough Island and later visited Cape Town (10). During the period 1939 - 1941 Captain Bernhard Rogge of the raider ship Atlantis made an extended voyage in the South Atlantic, Indian and South Pacific Oceans, and visited the Iles Kerguelen between December 1940 to January 1941 (burying a seaman at Bassin de la Gazelle). The Atlantis is known to have been visited by an RFC-2 (the 'UFO' style craft which had served as a reconnaissance aircraft since late 1940.) The ship then adopted a new disguise as Tamesis before being sunk by HMS Devonshire near Ascension Island, on 22nd November 1941 (the Atlantis was also known as Hilfskreuzer 16 and was, at various times, disguised as Kasii-Maru or Abbekerk.(11).)