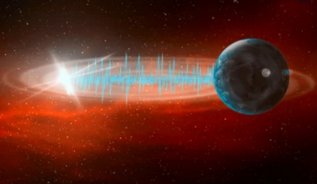 Until 1960, terrestrial satellites had been placed in equatorial orbit (west to east), rather than in polar orbit (north to south.) Yet on 4th January 1960, not one but two objects of sizeable proportions were detected in polar orbit. These objects were estimated to weigh 15 tons each (compared to the largest US satellite of that time which weighed only 500lbs or the Soviet's 3000lb.) Official confirmation of the existence of something unexplained in Earth's orbit came in February of that year when the military funded US National Space Surveillance Control Centre (NSSCC) formally admitted that an unidentified 'satellite' was in polar orbit, although with a rider that a natural explanation would probably be forthcoming at a later date. It wasnt, or at least none was made available. Further support for the belief that an alien probe may be in existence in our Solar System appeared in the April 1995 volume of The Observatory, a serious astronomical journal published in the United Kingdom. The article's author was one Duncan Steel of the University of Adelaide in Australia, and an expert in the detection of small objects in near-Earth space. 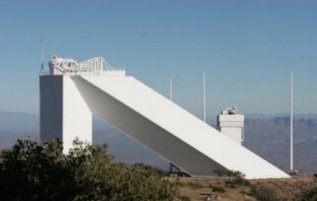 In 1995 Steel authored a book Rogue Asteroids and Doomsday Comets which had a forward written by eminent science fiction writer Arthur C. Clarke. Steel had also served on both the Detection Committee and the Intercept Committee that were created by NASA to consider the danger to Earth of such rogue asteroids and comets. The title of Steel's article was hardly likely in itself to set the world on fire; SETA and 1991 VG, yet its contents were startling. The main contention in the article being that an object discovered in late 1991 in orbit around the Sun could be a candidate for an alien probe. This 10 metre object was discovered by the Spacewatch telescope at Kitt Peak Observatory (above) in November 1991 and named 1991 VG. It was later observed in April 1992 by a larger telescope at the same observatory. Steel concluded that the object might be an alien probe because of two unusual characteristics not associated with asteroids nor comets. Firstly, it exhibited rapid variations in brightness, indicating that the object has areas with distinct and different reflectivity, which is highly unusual for small asteroids. Steel also noted that the object has an Earth-like orbit, with low eccentricity and inclination and an orbital size just slightly larger than that of the Earth itself. (Steel noted that in 1991 VG passed close to Earth, some 300,000 miles, just further than the Earth-Moon distance.) 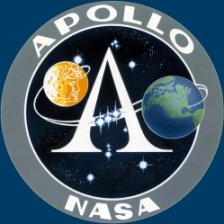 Steel concluded that there could be only three possibilities to explain the object. It was either an asteroidal body, a man-made spacecraft or an alien artefact of some kind. Being a man-made spacecraft could easily be ruled out, and Steel equally dismissed the idea of it being an asteroid. His argument here being that the brightness of the object fluctuated rapidly and this is a characteristic of artificial satellites, as such satellites have angles, highly reflective surfaces and they rotate for stability - these features could account for the fluctuations in the brightness noted. Steel also concluded that 1991 VG could not be an asteroid as its orbit would be unstable over a period of a few thousand years due to its similarity with Earth's orbit and close approach to our planet. Despite this, Steel admitted that he could not prove that the probe was of alien origin any more than he could prove it was of another origin. Steel also noted in his article that the 1991 VG approached Earth in 1991, sixteen years earlier in 1975 and sixteen years earlier in 1959. A simple calculation reveals that at sixteen yearly intervals, 1991 VG would have also have approached Earth in 1943 and 1927, the very year in which the LDEs were first discovered with their delays of 3-15 seconds.

But what of these delays? Professor Bracewell of Stanford University suggested that there could be a message encoded in them. He argued that a radio message could be received from Earth, and then rebroadcast back to the point of origin as a sign of intelligence. The time delays could then be accounted for by one source rather than a number of reflective bodies scattered around the inner Solar System. Bracewell also speculated that the timing of the delayed rebroadcasting of the original signals could also contain a coded message.This idea was seized upon by Professor Duncan A. Lunan of Scotland who was in communication with Bracewell at the time. Lunan set about attempting to establish whether there actually was some message that could be gleaned from the delayed echoes. Lunan took the data from the delayed signals and plotted the figures on a graph. Instead of recording the time delay in the Y-axis, he plotted it on the X-axis. Leonard Carter, the executive secretary of the respected British Interplanetary Society, noted, "Lunan plotted the echoes on a graph. Oddly they seemed to make a series of dots outlining the [known] constellations. But they were slightly distorted." (6) This work was published in 1973 in the British Interplanetary Society's magazine Spaceflight.

When this 'distortion' was corrected the result was profound, for the dots appeared to show the constellations as they appeared in Earth's night sky some 12,600 years ago; the time that the world suffered terrible conflagration; the time of the ending of the last ice-age and the beginning of known history; the time when the city of Tiahuanaco was built and the time the Sphinx stared at its own reflection in the sky. The time when the pyramids and the Nile mirrored on Earth Orion's belt in the heaven's above. Perhaps it is only a co-incidence that this moment in Earth's history was used in the symbol of man's first exploration of space (above).