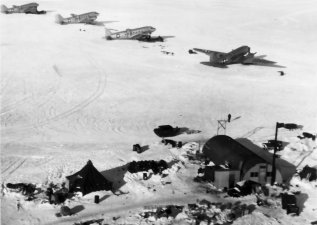 Then the mission that had been expected to last for between 6-8 months, came to an early and faltering end. The Chilean press reported that the mission had "run into trouble" and that there had been "many fatalities". (The official record, though, states that one plane crashed killing three men; a fourth man had perished on the ice; two helicopters had gone down although their crews had been rescued and a task force commander was nearly lost (7).) The Chilean claims to one side, it is known that the Central Group of Operation Highjump were evacuated by the Burton Island ice-breaker from the Bay of Whales (above) on 22nd February 1947; the Western Group headed home on 1st March 1947 and the Eastern Group did likewise on 4th March, a mere eight weeks after arrival.

Quite what was going on is still not a matter of public record, however it is known that Byrd was immediately summoned to Washington and interrogated by the Security Services on his return after being initially 'welcomed back' by Secretary of War James Forrestal on 14th April 1947. (Forrestal was late to commit suicide.) On 5th March 1947 the El Mercurio newspaper of Santiago, Chile, ran the headline On Board the Mount Olympus on the High Seas which quoted Byrd in an interview with Lee van Atta. "Adm. Byrd declared today that it was imperative for the United States to initiate immediate defence measures against hostile regions. The Admiral further stated that he didn't want to frighten anyone unduly but it was a bitter reality that in case of a new war the continental United States would be attacked by flying objects which could fly from pole to pole at incredible speeds. Admiral Byrd repeated the above points of view, resulting from his personal knowledge gathered both at the north and south poles, before a news conference held for International News Service." Bearing in mind that all this occurred (the search for craft that could fly from pole to pole at 'incredible' speeds) a year after the war had ended with Germany defeated, makes it all the more intriguing. 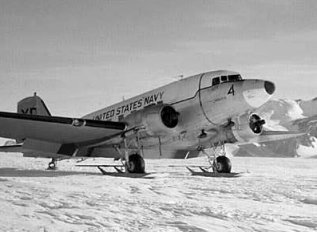 So who was the enemy that owned or flew these flying objects? Germany was apparently defeated, and there was no evidence that the new emerging enemy, Russia, had such superior technologies. Certainly there was no other known country whose activities that could explain the US invasion of Antarctica nor for the development of any craft that could fly "fly from Pole to pole with incredible speeds." Rumours began to circulate that whilst Germany had been defeated, a selection of military personnel and scientists had fled the fatherland as Allied troops swept across mainland Europe and established themselves at a base on Antarctica from where they continued to develop advanced aircraft based on extraterrestrial technologies. (It is interesting to note that at the end of the war the Allies determined that there were 250,000 Germans unaccounted for, even taking into account casualties and deaths.)

Incredible as it may sound, there is considerable supporting evidence for these claims about a German base for, on the very eve of the Second World War, the Germans themselves had invaded part of Antarctica and claimed it for the Third Reich. In fact Hitler had authorised several expeditions to the poles shortly before WWII. Their stated objective was to either to rebuild and enlarge Germany's whaling fleet or test out weaponry in severely hostile conditions. Yet, if true, all of this could have been achieved at the North Pole rather than at both poles and been much closer to home. 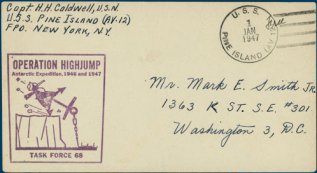 The Germans had long held an interest in the South Polar region of Antarctica with the first Germanic research of that area being undertaken in 1873 when Sir Eduard Dallman (1830-1896) discovered new Antarctic routes with his ship Gronland during his expedition for the German polar Navigation Company of Hamburg. (The Gronland also achieved the distinction of being the first steamer to operate in the southern ocean.) A further expedition took place in the early years of the twentieth century in the ship the Gauss (which became embedded in the ice for 12 months), and then a further expedition took place in 1911 under the command of Wilhelm Filchner with his ship the Deutchland. Between the wars, the Germans made a further voyage in 1925 with a specially designed ship for the Polar Regions, the Meteor under the command of Dr. Albert Merz. Then, in the years directly preceding the Second World War, the Germans laid claim to parts of Antarctica in order to set up a permanent base there.

Given that no country actually 'owned' the continent and it couldn't exactly be conquered as no-one lived there during the winter months at least, it appeared to the Germans that the most effective way to 'conquer' part of the continent was to physically travel there, claim it, let others know of their actions and await any disagreements.