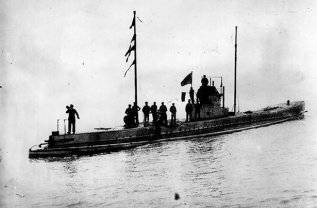 History also records that the U-boat, U-977, left Kristiansand in Norway on 2nd May 1945 for combat patrol in the English Channel. After Germany's surrender, Captain Heinz Schaffer decided to head for the South Atlantic but he first gave the married men on board the chance to go ashore; 16 of them took Schaffer up the offer. After a 66 day submerged trip, and a further run on the surface, U-977 arrived in Mar del Plata, Argentina on 17th August, and later surrendered to the US in Boston on 13th November 1945 three months later. Its activities during this period are unknown. This incident occurred shortly after the end of the war, however, there continued to be accounts of German activity for a considerable post-war period. The French Agence France Press on 25th September 1946 stated "the continuous rumours about German U-boat activity in the region of Tierra del Fuego ['Feuerland' in German] between the southernmost tip of Latin America and the continent of Antarctica are based on true happenings."

Then the French newspaper, France Soir gave the following account of an encounter with such a German U-boat. "Almost 1.5 years after cessation of hostilities in Europe, the Icelandic Whaler Juliana was stopped by a large German U-boat. The Juliana was in the Antarctic region around Malvinas Islands [The Falklands] when a German submarine surfaced and raised the German official Flag of Mourning - red with a black edge. "The submarine commander sent out a boarding party, which approached the Juliana in a rubber dingy, and having boarded the whaler demanded of Capt. Hekla part of his fresh food stocks. The request was made in the definite tone of an order to which resistance would have been unwise. "The German officer spoke a correct English and paid for his provisions in US dollars, giving the Captain a bonus of $10 for each member of the Juliana crew. Whilst the foodstuffs were being transferred to the submarine, the submarine commander informed Capt. Hekla of the exact location of a large school of whales. Later the Juliana found the school of whales where designated."

Could it be possible that other German U-boats, in addition to U-530 and U-977 were continuing to operate in the area following the war? There are no formal records of such activity, however it is known that 54 German U-boats 'disappeared' during the war, of which only 11 are likely to have met their fate at the hands of mines (see appendix II). The future may well reveal that fate of more of these submarines, however given the French and South American reports, and the number of missing U-boats, it may not be unreasonable to conclude that at least some of them relocated to the South Polar area. History also gives us further clues as to a Nazi-Antarctica connection, for it records that Hans-Ulrich Rudel of the German Luftwaffe was being groomed by Hitler to be his successor. It is known that Rudel made frequent trips to Tierra del Fuego at the tip of South America nearest Antarctica. And one of Martin Bormann's last messages from the bunker in Berlin to Donitz also mentioned Tierra del Fuego.

Then there are claims about Rudolph Hess, Hitler's best friend who went to England and was arrested as a war criminal on 10th May 1941. Following his arrest, Hess was held in Spandau Prison in isolation until his death. Such unique treatment is suggestive that he had information that the Allies considered dangerous. Indeed, in his book Secret Nazi Polar Expeditions Christof Friedrich states Hess "was entrusted with the all-important Antarctic file ... Hess, himself, kept the Polar file." (15)

However, for Operation Highjump to have been an attempt to ferret out a remaining Nazi base on the Antarctic continent, there would have been two prerequisites. Firstly, Operation Highjump would have to provide evidence that the mission included a reconnaissance of Neu-Swabenland and secondly, there would have to be an area of the frozen continent that could allow such a base to exist throughout the year. And indeed both criteria are met. Both the Eastern and Western Groups of Operation Highjump had been active around Neu-Schwabenland. So was a Russian boat that "proved to be unfriendly" (16). The Eastern group were frustrated in their efforts to make a reconnaissance of the area, despite incredible efforts to secure photographs for later examination. However by then "it was very late in the season ... The sun had only been briefly glimpsed in the past few weeks, but everyone could tell that the continually grey skies and clouds were darkening daily.

In another month all light would be gone from Antarctica. The waters girdling the continent would begin to freeze rapidly, binding unwary ships in a crushing embrace ... Dufek [the commander] was loath to surrender.He ordered his ships northwards away from the pack. Perhaps one or two more flights might be possible. But on the morning of 3 March ... virgin ice was seen to be forming on the water's surface [and the] Eastern group steamed out of Antarctica. (17)" The Western Group, however, were to make a remarkable discovery. At the end of January 1947 a PBM piloted by Lieutenant Commander David Bunger of Coronado, California, flew from his ship, the Currituck and headed towards the continent's Queen Mary Coast.