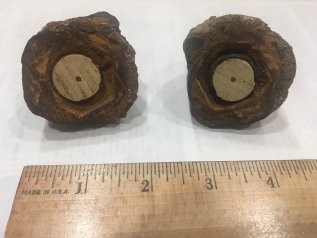 One such piece of evidence came to light on 13th February 1961 when three rock hunters, Mike Mikesell, Wallace "Wally" Lane and Virginia Maxey were collecting stones about six miles north east of Olancha, California for the 'Gem and Gift shop' they co-owned. They came across a stone located near the top of a peak approximately four thousand three hundred feet above sea level and three hundred and forty feet above the dry bed of Owens Lake. The following day, Mikesell cut the stone in half and found inside a three quarter inch wide cylinder made of porcelain or ceramic, and in the centre of the cylinder was a 2mm shaft of a bright metal. The shaft was magnetic and had not oxidised. Circling the ceramic centre were rings of copper, which had also not corroded (above). Not knowing what to do with the object, the shop owners sent the object to the Charles Fort Society. X-rays taken revealed that the 'geode' was some kind of mechanical apparatus and that one end was fixed to a spring or helix of metal. These tests suggested that the artefact was some form of electrical instrument, and geologists confirmed that the rock in which it was found was at least half a million years old (11). That said, no professional scientist has ever investigated the artefact, nor is it likely to be as the owners have continued to request an exorbitant payment before they will let anyone see it.

Other finds are equally intriguing. In the June 1851 issue of Scientific American a report concerning a metallic vase that had been dynamited out of solid rock at Meeting House Hill in Dorchester Massachusetts was reprinted from the Boston Transcript. "On putting the two parts together it formed a bell shaped vessel, four and a half inches high, six and a half inches at the base, two and a half inches at the top and about an eighth of an inch in thickness. The body of this vessel resembles zinc in colour, or a composition metal in which there is a considerable portion of silver. On the sides there are six figures of a flower, a bouquet, beautifully inlaid with pure silver, and around the lower part of the vessel, a vine, or wreath, inlaid also with silver. The chasing, carving and inlaying are exquisitely done by the art of some cunning craftsmen. This curious and unknown vessel was blown out of the solid pudding stone, 15 feet below the surface" (12). Journalists and archaeologists investigating this puzzle estimated that the solid rock, which had entombed this vase, was at least several million years old. Some years before, a Colorado man obtained coal from a drift mine known as the Marshal coal bed, the coal being taken from a point 300 feet below the surface.

The Scientific American report continues: "Upon my friend's return home he placed some large chunks of the coal in the stove, but not burning well, he broke them and in the midst of one, imbedded in a hollow place, but completely surrounded by the coal, the thimble was found. These coal beds are classed by Prof. Hayden as lignitic and lying between the Tertiary and the Cretaceous. Much of the coal is 'fresh'; some of it is too 'green' to burn well. My informant says the chunk in which the thimble was found 'showed the grain of the wood'. For some time he kept it, but it is now lost. The thimble was full of coal and sand and retained its shape well. (13)" The end of the Cretaceous period was most notably marked by the end of the dinosaurs.

On 9th June 1891 a Mrs. S. W. Culp of Morrisonville, Illinois, was shovelling coal into her kitchen stove when she discovered a lump of the coal broken in two revealing a gold chain of intricate workmanship. The Morrisonville Times of 11th June reported the story; "Mrs. Culp thought the chain had been dropped accidentally in the coal, but as she undertook to lift the chain up, the idea of its having been recently dropped was shown to be fallacious, for as the lump of coal broke, it separated almost in the middle, and the circular position of the chain placed the two ends near to each other; and as the lump separated, the middle of the chain became loosened while each end remained fastened to the coal. This is a study for the students of archaeology who love to puzzle their brains out over the geological construction of the earth from whose depths the curious are always dropping out." (14) The coal was reported to be from the Carboniferous period and therefore some two hundred and sixty million years old. Similarly, on the 22nd of June 1844 workmen were blasting granite out of a pit in a quarry near Rutherford Mills in England. The came across a gold thread embedded in rock judged archaeologists to be 60 million years old (15).

In Pennsylvania in 1937, a Mrs Myrna Burdick found a spoon among ash from burnt coal. The ashes had not been disturbed after a large piece of coal was burned, but when they fell apart, the spoon was noticed among them (16). The SpringField (Illinois) Republican reported in 1851 that a businessman, Hiram de Witt, had brought back with him from California a piece of auriferous quartz about the size of man's fist. When showing this rock to a friend, it slipped from his hand and split open on the floor. In the centre of the quartz they found a cut iron nail, slightly corroded but straight with a perfect head. The quartz was estimated to be over a million years old (17).