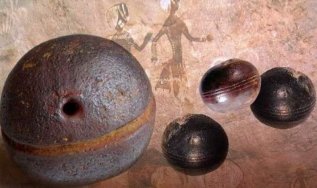 The particular block in which the nail was found, was nine inches thick, and in proceeding to clear the rough block for dressing, the point of the nail was found projecting about half an inch (quite eaten with rust) into the 'till', the rest of the nail lying along the surface of the stone to within an inch of the head, which went right down into the body of the stone. "The nail was not discovered while the stone remained in the quarry, but when the rough block (measuring tow feet in length, one in breadth, and nine inches in thickness) was being cleared of the superficial 'till'. There is no evidence beyond the condition of the stone to prove what part of the quarry this block may have come from ... It is observed that the rough block in which the nail was found must have been turned over and handled at least four or five times in its journey to Inchyra, at which place it was put before masons for working, and where the nail was discovered." (18)

A two-inch metal screw discovered in a piece of feldspar unearthed in 1865 from the Abbey Mine in Treasure City, Nevada. The screw had long since been oxidised but its form, particularly the shape of its threads, could be clearly defined in the feldspar, which were millions of years old (19). In 1885 in the foundry of the Austrian Isador Braun of Vocklabruck, a block of coal dating from the Tertiary period was broken open. Inside was discovered a small metal tube. The cube was taken to the Salzburg Museum where Austrian physicist Karl Gurls examined it. Tests indicated that the cube was composed of a steel and nickel alloy. It measured 2.64 by 2.64 by 1.85 inches; weighed 1.73 pounds and had a specific gravity of 7.75. The edges of the cube were straight and sharp; four of its sides were flat, whilst the other two remaining sides, opposite each other, were convex. A deep grove had been cut all the way round the cube about half way up its height. There appeared little doubt that the cube was machine made and seemed to be part of a larger mechanism (20).

In the late 1780s, in a quarry near Aix-en-Provence in France, coins, hammer handles; other tool fragments and broken boards were found "all changed into agate". These finds were 50 feet deep "and covered with eleven beds of compact limestone (21)". In November 1830 a block of marble was quarried from a depth of 60-70 feet in a quarry near Norristown, Pennsylvania and when slabs were cut off the block, two raised characters, resembling the letters I and U were found in an rectangular indentation 1.5 inches long and 5/8 of an inch wide in the marble (22).

Five miles out in the Mediterranean, directly south of Marseilles, Jacques Mayol, a French diver, explored a mile long shoal, running at a depth of sixty to one hundred and twenty feet with vertical shafts, quarries and slag heaps lying outside the shafts. In other words, a ma-worked mine from a period in man's development contemporary with Cro-Magnon man (23). On August 2nd 1890, Superintendent J H Neale of the Montezuma Tunnel Company signed the following statement about discoveries made by him at Table Mountain in Tuolumne County, California. "At a distance of between 1400 and 1500 feet from the mouth of the tunnel, or of between 200 and 300 feet beyond the edge of solid lava, Mr Neale saw several spear-heads, of some dark rock and nearly one foot in length.

On exploring further, he found a small mortar three or four inches in diameter and of irregular shape. This was discovered within a foot or two of the spearheads. He then found a large well-formed pestle, now the property of Dr. R. I. Bromley, and near by a large and very regular mortar, also at present the property of Dr. Bromley. All of these relics were found the same afternoon, and were all within a few feet of one another and close to the bed-rock, perhaps within a foot of it. Mr Neale declares that it is utterly impossible that these relics can have reached the position in which they were found excepting at the time the gravel was deposited, and before the lava cap formed. There was not the slightest trace of any disturbance of the mass or of any natural fissure into it by which access could have been obtained either there or in the neighbourhood (24)." What is remarkable is that the pestle and mortar are dated to 33-55 millions years old.

In a paper read before the American Geological Society and published in its journal in 1891, geologist George F Becker, stated; "It would have been more satisfactory to me individually if I had myself dug out these implements, but I am unable to discover any reason why Mr Neale's statement is not exactly as good evidence to the rest of the world as my own would be. He was as competent as I to detect any fissure from the surface or any ancient workings, which the miner recognises instantly and dreads profoundly. "Some one may possibly suggest that Mr Neale's workmen 'planted' the implements, but no-one familiar with mining will entertain such a suggestion for a moment. The auriferous gravel is hard-picking, in large part it requires blasting, and even a very incompetent supervisor could not possibly be deceived in this way. In short, there is, in my opinion, no escape from the conclusion that the implements mentioned in Mr Neale's statement actually occurred near the bottom of the gravels, and that they were deposited where they were found at the same time with the adjoining pebbles and matrix." (25). However, Neale's account may not be as honest as he claims and Becker believed, for in a later statement given to William Henry Holmes in 1899 and detailed in 'Review of the Evidence Relating to Auriferous Gravel Man in California' (26)

Neale stated that it was one of the miners and not himself who actually discovered the spearpoints inside the tunnel. Then later, when he discussed the matter with a Dr. Sinclair he changed his story again and reported that he had discovered all of the artefacts except for a stone dish or platter found by a miner simply known as 'Joe.' (27) Neale's story and affidavit do suffer from a lack of documentary and other supporting evidence, however one piece of evidence that Earth does have a hidden history is not so similarly flawed. This clue came to light in 1929 at the Old Imperial Palace in old Constantinople and it appears to prove that man not only knew of the continent of Antarctica in pre-history (only being 'rediscovered' in 1820) but had also mapped it before it became embedded in ice.