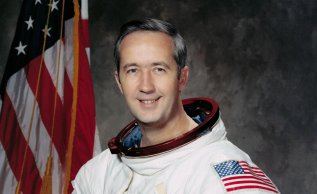 The Mercury missions were followed by the Gemini space flight series, and, according to some researchers, every astronaut in all twelve space missions of this series saw one or more unexplainable objects in space. NASA continued to claim such 'encounters' had never occurred. In fact the closest NASA authorities came to admitting unknowns were actually sighted was in June 1966 after the launch of Gemini IX, a flight that was later cancelled due to what was claimed as 'interference' with the radio hook-up. This position was later changed, with NASA admitting that astronauts had seen unidentified flying objects on several occasions. Major Donald E. Keyoe, former head of the National Investigative Committee on Ariel Phenomena (NICAP), verified NASA's statement. He claimed that the very first unmanned flight in the Gemini series detected anomalous phenomena, stating that he believed four such objects in orbit had followed the spacecraft. Keyoe also claims he received his information from several scientists who were tracing the flight of GT-1 on radar from Cape Kennedy. These scientists reported that the four objects continued to follow the spacecraft, shadowing it for a complete orbit before suddenly streaking off and disappearing.

In June 1965, Major James McDivitt (above) and America's first space walker, Major Edward White, saw and photographed a glowing egg shaped object (below left), which approached the Gemini IV (3rd June -7th June 1965) capsule in which they were orbiting the Earth. The following day the astronauts another unknown object from their spacecraft window and reported that the object was first above them and then below. It appeared to be a cylindrical "silvery" light that seemed to be "closing in" on the Gemini craft (below right). The astronauts made preparations to take evasive action "to avoid collision" and McDivitt took footage of the object with his movie camera, taking five frames of film which show the object as it made its flyby. The footage shows an egg shaped structure giving off a fan like glow, with a long tail of light. The following is the actual Mission Control report on the sighting: "This is Gemini Control. We are now 30 hours and 9 minutes into the mission. Spacecraft Gemini 4 has just completed a pass over the state on its 20th orbit." In voice communication with Gus Grissom, spacecraft communicator, Command Pilot Jim McDivitt reported that he had sighted another object in space. He described it only as an object that appeared to have big arms sticking out. He said he had taken some motion pictures of the object, but was having some difficulty because of the sun." (6)

A few moments later, Gus Grissom asked whether McDivitt was still watching "that thing out there." McDivitt answered, "no, I've lost it. It had been arms sticking out of it. I only had it for just a minute, I got a couple of pictures of it with the movie camera and one with the Hasselblad. But I was in free drift and before I could get the control back, I drifted into the sun and lost it." (7) Mission control later approached the Space Detection and Tracking System seeking to identify the unknown object, however they were advised that the closest object was more than 1200 miles away. Mission Control later questioned the astronauts about the 'sighting':

Capcom: Roger, could you give us an estimate as to how far that satellite was from you yesterday?

Gemini 4: I couldn't really tell, it looked like quite a large object. It looked like I was approaching it rather rapidly. I'd say ten miles or so.

McDivitt: That would be only a guess. It was close enough that I could see.

Capcom: You're coming off pretty bad there. I couldn't read that.

Capcom: That came through good.

McDivitt: All right. I said I got close enough to...

Capcom: Close enough to it ... to what? The nearest we can tell, there wasn't anything that close to you. Pegasus was about 1200 miles away.

McDivitt: No, not that close. That far away.

McDivitt: I took a picture. I just hope it comes out.

After the astronauts returned to Earth, NASA examined the film and some of the photographs were released, however McDivitt alleges that the photographs so released were not of the object he had seen (9).