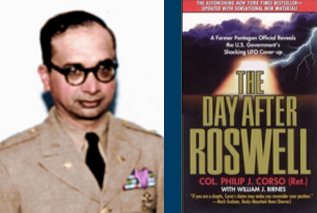 Another impressive witness to what was going on after the end of the Second World war was Philip Corso, who, as discussed previously, wrote a book entitled The Day After Roswell. It will be remembered that Corso was Chief of the US Army's Foreign Technology Division and a member of President Eisenhower's National Security Council. During his twenty-one year military career he was awarded with nineteen medals, decorations and ribbons for service, and testified before the House National Security Committee about American POWs held in North Korea. Corso's book, however, failed to generate the expected attention, perhaps because most of the information it contained merely confirmed what had already been 'leaked' out; namely that an alien craft did crash at Roswell and that his job as Chief of the Foreign Technology Division was to reverse engineer alien technology recovered from the wreckage.

Within the book Corso makes reference to the extent and intensity of rivalry between government agencies. He even depicts the CIA as a more serious threat in the 1960s than the Soviets ever were, and he describes how he spent more time avoiding being spied upon by the US intelligence services that by the Russians. He also notes that whilst there was real rivalry between the West and Soviet Union, the Cold War was mainly a cover for preparing to deal with the perceived threat from the aliens and for getting and keeping allied nations and the people on board to support a military build up that has always primarily been directed toward defence against alien incursion. Corso describes many of the technologies and products that he says are the direct result of, or assisted by, the reverse engineered alien technology: integrated circuits, lasers, optical fibres, super-strong fabrics like Kevlar, stealth technology, EMP devices to disable electronics, and directed energy weapons. He suggests that much of the work undertaken on mind control technologies was inspired by alien use of such technologies to control their craft and abducted humans.

Corso also details how the Strategic Defence Initiative (Star Wars) was actually designed to defend against aliens, more than against missiles from other human nations. History records a speech by former President Reagan as quoted by then Soviet President Mikhail Gorbachev as stating "The US President said that if the Earth faced an invasion by extraterrestrials ... the United States and the Soviet Union would join forces to repel such an invasion." In this book Corso makes the following points:

The Earth is being visited and observed by aliens flying UFOs. There have been multiple crashes of UFOs, recoveries of them, and recoveries of their alien crew-members including the crash near Roswell in 1947. The captured UFOs were/are kept at Norton, Edwards and Nellis (better known as Area 51) Air Force Bases. One of the Roswell aliens was shot and killed by a soldier, who thought it was trying to flee. The original crash near Roswell was apparently the result of damage to the craft by lightening which disrupted the anti-gravity effect it used. The alien craft recovered near Roswell had no facilities for rest, feeding or waste disposal, and no obvious power or propulsion system.

The aliens are remarkably similar to human beings in their anatomy, but lacked digestive or excretory organs. (Corso is of the opinion that the 'greys' are synthetic beings, like androids, designed for performing the missions of the UFOs, but lacking true independence or will or purpose.) The US government has been in contact with the aliens, and has negotiated an agreement with them that Corso describes as a temporary surrender. Alien artefacts have been reversed engineered to some degree and some of the results fed to companies that have developed products based on it.

These technologies were precursors to today's integrated circuit chips, fibre optics, lasers, night-vision equipment, super-tenacity fibres and classified discoveries such as pyschotronic devices that can translate human thoughts into signals that control machinery, stealth aircraft technology an Star Wars particle beam devices. The original ARPANET (which evolved into the Internet) was largely driven by the need to co-ordinate a response to the 'alien problem' and to develop a communications system that would be difficult for aliens to interdict. A working group was formed in September 1947 by President Truman and not all subsequent Presidents have been told about its existence. (MJ-12) Officials have threatened people to get them to keep silent and may have killed people to this end.

As noted above, the book does have strong credentials, and Corso himself held a reputation for standing up for what he believed was right. For example, at the end of the Second World War, he arranged the safe passage of 10,000 Jewish refuges out of Rome to Palestine and under the Kennedy Administration. It was Corso who leaked information to trusted journalists that Kennedy and the CIA were prepared to allow the Soviets to deploy nuclear missiles in Cuba. This leak resulted in the Cuban Missile Crisis as Kennedy was forced to confront the situation. Corso believes that Kennedy was assassinated by a conspiracy of elements within the US government. His work on the staff of the Warren Commission under Senator Richard Russell makes this claim credible.